Tuesday, September 22, 2020
Scoop is a totally free e-newsletter, produced for the benefit of the friends who share our hobby!
Home 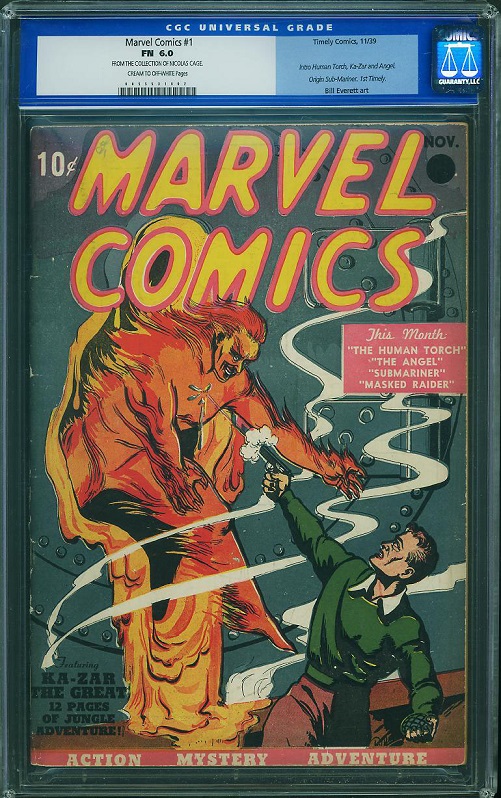 “Since the beginning of comic book collecting as a serious hobby in the 1960s, Marvel Comics #1 has been considered one of the three most significant comic books in the hobby along with Action Comics #1 and Detective Comics #27,” ComicLink founder and managing director, Josh Nathanson, said. “Marvel Comics #1 launched the comic book company that eventually took its very name, Marvel Comics, as its brand name. Today Marvel is the most popular name in entertainment across multiple media channels with hundreds of millions of fans across the globe and it all started with Marvel Comics #1!”

In addition to being the first Marvel publication, Marvel Comics #1 introduced two of the most enduring Marvel characters: the android Human Torch and the antihero Sub-Mariner. Along with Captain America, these two characters formed the backbone of Marvel’s line during the Golden Age, appearing in their own solo titles and anthology books. When Marvel reintroduced these characters in the early ‘60s, the Human Torch became a human member of the Fantastic Four and Sub-Mariner returned as a foe but became an antihero and member of the Avengers and other teams.

Marvel Comics #1 is the only comic book to go by that title as it was renamed Marvel Mystery Comics with its second issue. It ran for 10 years and featured some of the most memorable superhero covers of the World War II era with Human Torch and Sub-Mariner stories in each issue.

“It’s been nearly three years since we have offered any example of Marvel Comics #1 at auction and this is the second best that has ever hit the ComicLink block in our many years of holding auctions,” Nathanson said. “The last example we had the opportunity to market was in 2017 when we auctioned a CGC 2.5 for $87,252. This CGC 6.0 Marvel Comics #1 shares its tier with just three others, and it is one of the top 12 examples ever certified for this issue. Only a few comparable examples have traded hands publicly in the past decade and this particular CGC 6.0 has been tucked away in a private collection since 2007. Prior to that, this example was part of the collection of actor Nicolas Cage.”

This is just one of many incredible offerings that will be available on ComicLink.com in coming months.

A preview of the Summer Featured Auction that opens on August 13 is available.