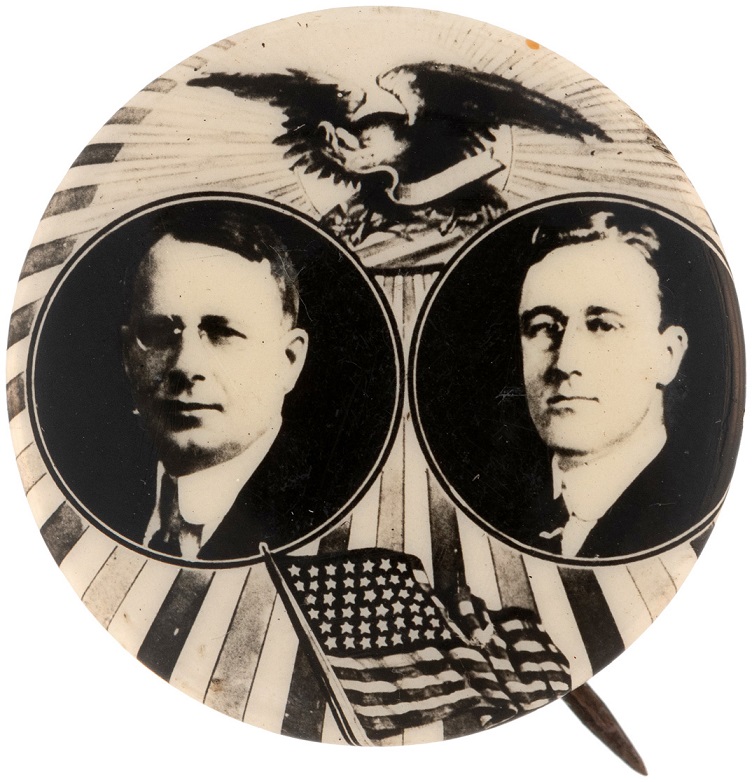 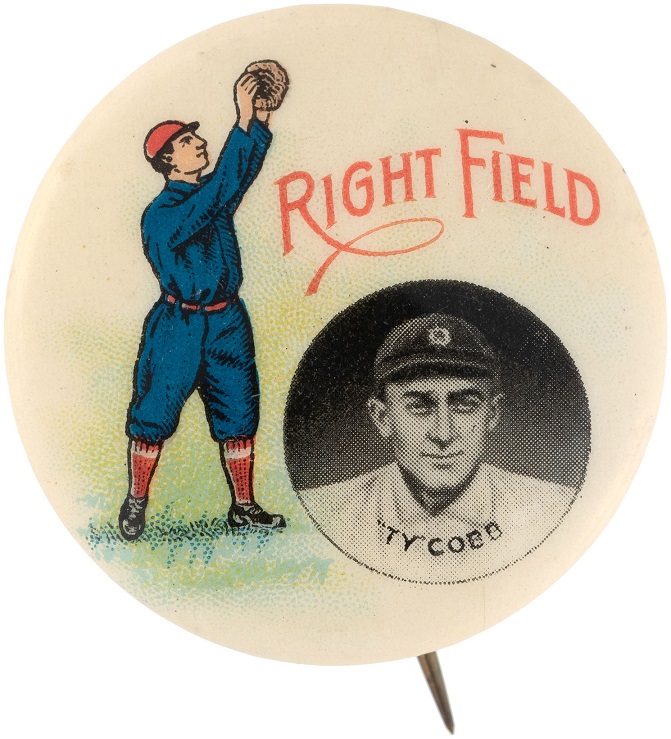 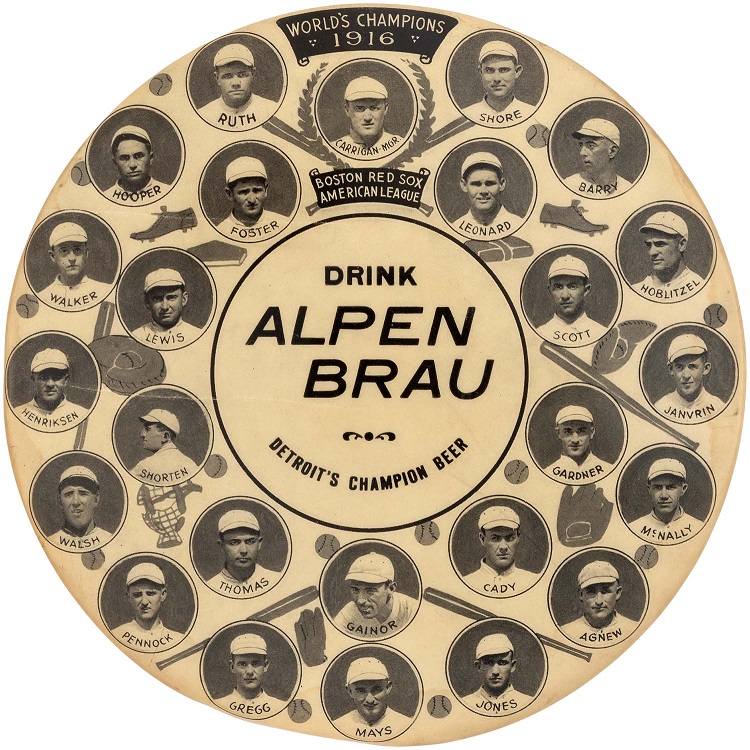 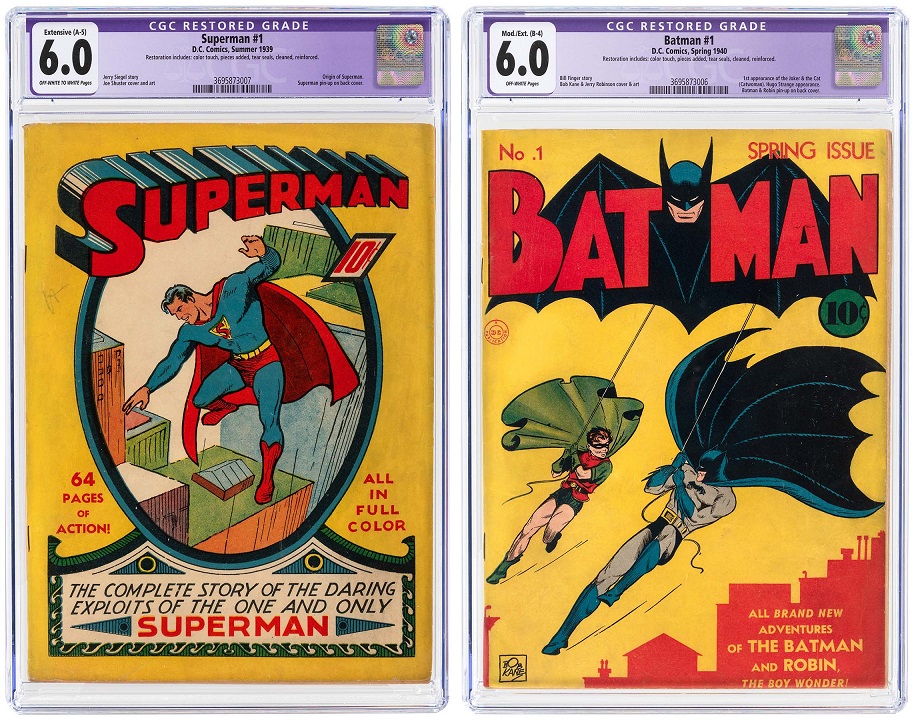 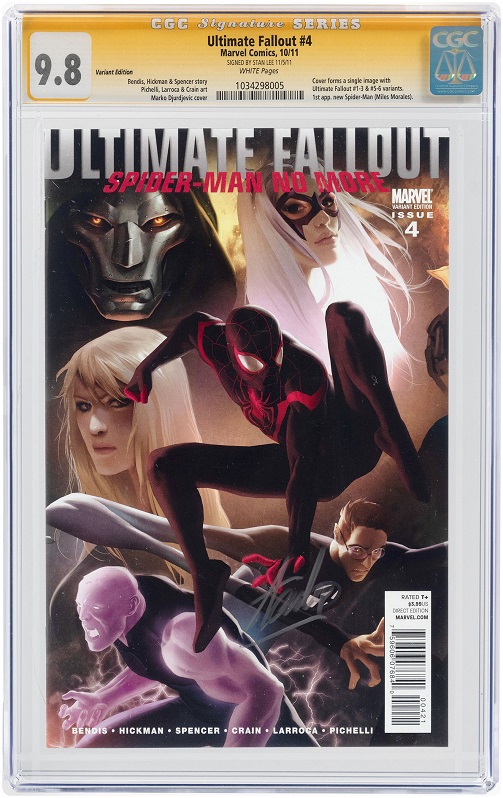 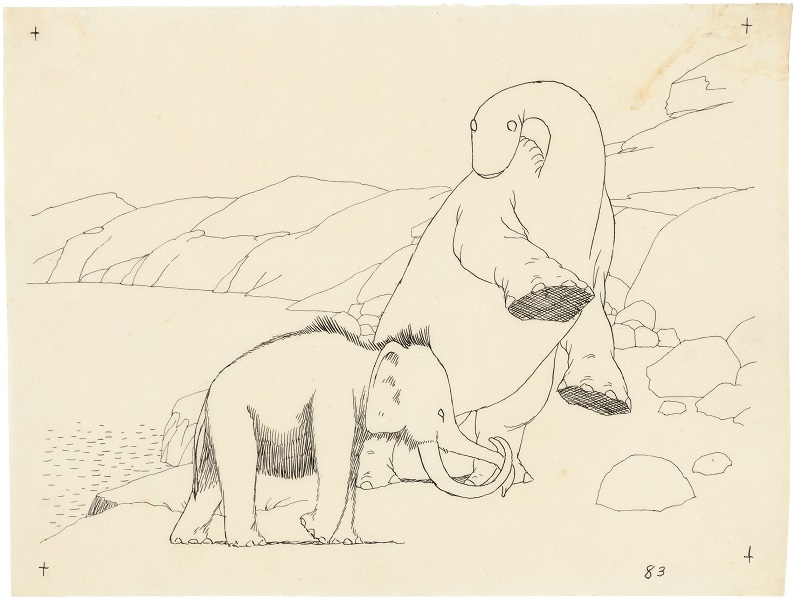 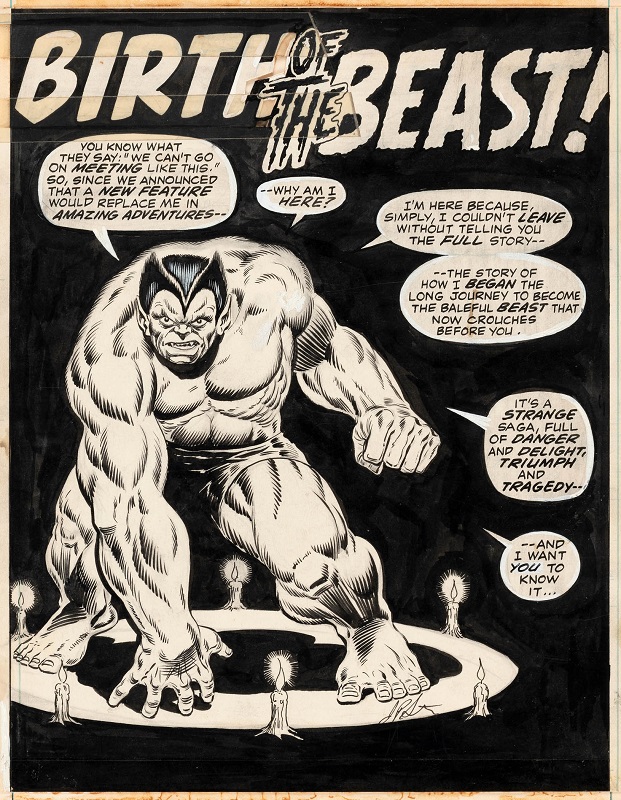 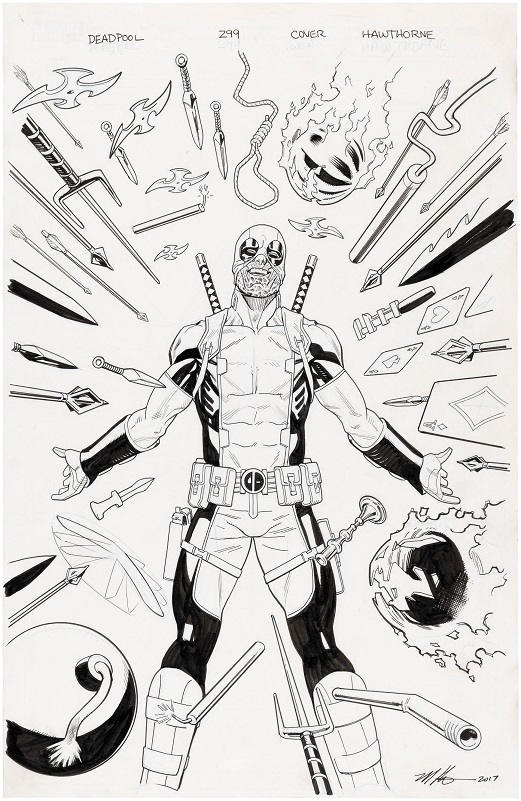 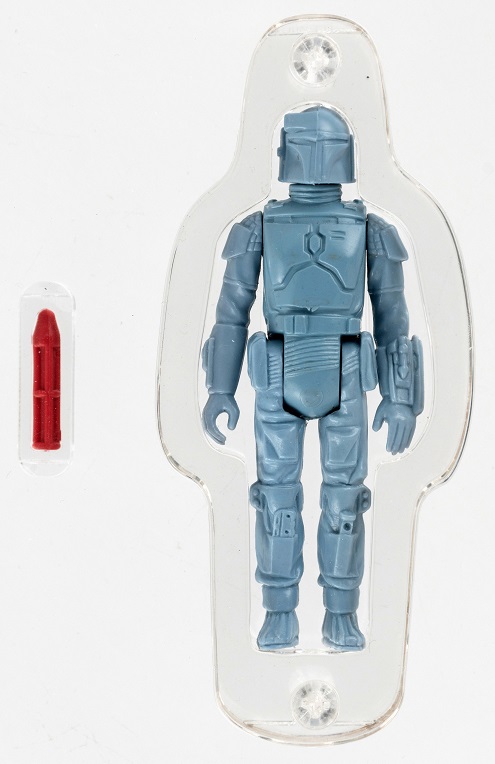 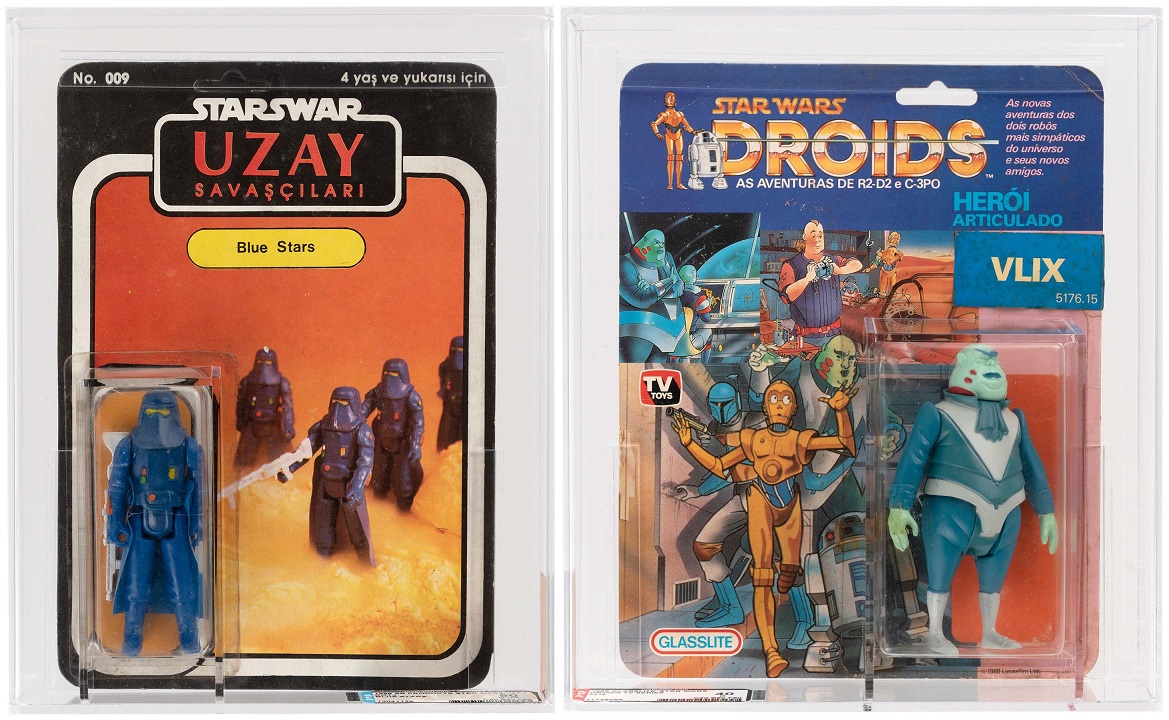 The ultimate prize from the late Dr. Paul Munchinsky’s legendary trove of baseball buttons is on deck and ready to knock it out of the park at Hake’s September 23-24, 2020, pop culture memorabilia auction, which is now open to online bidding. The oversize 6-inch button depicting the 1916 World Series Champion Boston Red Sox is deemed so important, experts believe it could set a new world auction record for a baseball pinback. It is the only 1916 World Series Championship button known to exist, with graphics depicting and identifying the manager and 24 teammates from the winning Red Sox team. Those players include three future Hall of Famers, including then 21-year-old pitching and batting phenom Babe Ruth.

The button’s crisp, visually dense display is also adorned with art images of baseball equipment and banners that say “World’s Champions 1916” and “Boston Red Sox American League.” The central advertising message on the pinback raises intriguing questions about the button’s origin and intended use. Within a black-outlined circle in capital letters, it says “Drink Alpen Brau – Detroit’s Champion Beer.”

Paul Muchinsky spent years scrupulously researching why the Red Sox would appear on a button endorsing a Detroit brewery, but the mystery was never solved. Hake’s president, Alex Winter, thinks the button’s size suggests it may have been a sample made to illustrate a presentation to the brewery. “It’s the largest baseball button that had ever been made up to its time. It might have been produced in that size to maximize the detail, which is important because of the images of the players and manager.”

Any Red Sox Championship button made around the time of World War I is exceedingly rare, but the 1916 World Series button – the only one known from that year – is unquestionably the last word in baseball pinbacks. “Most serious collectors of baseball buttons would know of this button because it’s pictured on the back cover of Dr. Muchinsky’s 2004 reference book ‘Baseball Pinback Buttons,’” said Winter. “It was considered such a valuable asset, it was actually placed in a trust and not to be sold until 2037.” Recently Dr. Muchinsky’s family updated that decision, and it is now being offered by Hake’s with an opening bid of $10,000.

The auction playing field will be well covered with baseball rarities, including one of few known 1952 Mickey Mantle Fan Club real-photo buttons, $5,000-$10,000; and a 1915 “Ty Cobb Right Field” button with advertising on verso for Schmelzer’s Sporting Goods of Kansas City, Mo. “Schmelzer’s sponsored a ten-button set that year to be issued locally. It’s very rare for even one to appear at auction. We have examples of eight of the buttons in this auction, including Ty Cobb, ‘Shoeless’ Joe Jackson and Christy Mathewson,” Winter said. The Ty Cobb button is estimated at $10,000-$20,000. As if all that were not enough treasure to harvest from the Muchinsky collection, the auction also includes a circa 1947 Jackie Robinson “Hi Teammates” button with a facsimile signature and image of the trailblazing Hall of Famer swinging a bat. The only example of this button known to Hake’s, it is expected to make $2,000-$5,000.

A unique button is also the top highlight of the auction’s political memorabilia category. Recently discovered and new to the hobby, the Cox/Roosevelt 1920 Democratic campaign “Eagle & Rays” 7/8-inch jugate button is described in Hake’s catalog as its category’s equivalent to a Honus Wagner T206 tobacco baseball card or Action Comics #1 (which features the first appearance of Superman). Of the six varieties of Cox/Roosevelt buttons produced, four are unique or have populations of fewer than three known examples. Hake’s will offer the exciting new find, which is literally second to none, with an auction estimate of $20,000-$35,000.

The auction boasts 1,500 comic books in total, including nearly 300 CGC-certified issues and two titles that are among the most sought-after books of any title and any era: DC’s Superman #1 and Batman #1. Issued in Summer 1939, Superman #1 CGC 6.0 contains the origin story of Superman and has a Superman pinup on the back cover. Batman #1 CGC 6.0, which came out in Spring 1940, introduces both The Joker and Catwoman (then The Cat). A Batman and Robin pinup appears on the back cover. Both comics were formerly in the Dan Makara collection and now come to auction with individual estimates of $35,000-$50,000. Marvel Comics fans are sure to zero in on Tales of Suspense #39 CGC 8.0 from March 1963 contains the origin story and first appearance of Iron Man (Tony Stark). This high grade, in-demand Silver Age issue warrants a $20,000-$35,000 estimate.

Although it is a more-recent comic book, Marvel’s Ultimate Fallout #4 from October 2011 is as hot as any issue in today’s marketplace. Hake’s will auction a CGC 9.8 example of this book on Day 2 of the auction. It contains the first appearance of the new Spider-Man (Miles Morales) and has the added bonus of having been signed on the cover by Stan Lee. There is no higher graded Ultimate Fallout #4 issue in CGC Census. Estimate: $5,000-$10,000

Nearly 200 pieces of original comic art will be up for bid. A top highlight is Jim Starlin’s original pen and ink splash page art for the historic March 1973 Bronze Age comic book Amazing Adventures, Vol. 2 #17, which features the origin story of The Beast. Artist-signed, it is expected to reach $10,000-$20,000 at auction. A pair of Mike Hawthorne artboards that comprise the complete original cover art for Marvel’s Despicable Deadpool #299, April 2018, are artist-signed and dated 2017. “Mike is the most prolific Deadpool artist and has been nominated for both Harvey and Eisner awards. He’s well on his way to legendary status in the comic book world,” Alex Winter stated. The lot estimate is $2,000-$5,000.

From the earliest days of American animated films comes a very rare and outstanding original Winsor McCay (1869-1934) artwork that was used in production for the 1914 cartoon Gertie The Dinosaur. Reflecting Winsor’s unmistakable style, the India ink on rice paper drawing depicts a lively Gertie with a lumbering woolly mammoth against a prehistoric mountain landscape. “This is only the second original ‘Gertie’ artwork we’ve offered in our 53 years, and it’s by far the superior example of the two,” said Winter. Estimate: $10,000-$20,000

Close to 200 Star Wars lots will make an Earth landing at Hake’s sale. An encapsulated Boba Fett L-slot rocket-firing prototype of the action figure from Kenner’s 1979 Star Wars toy line is AFA-graded 80+ NM and originated from an ex-Kenner employee. It comes with a notarized CIB LOA and letter of provenance from Star Wars expert Brian Rachfal. Estimate: $50,000-$75,000. A fast-rising Star Wars collector subcategory is foreign and exotic productions. Two action figures of this type will make their auction debuts in the September sale. The first, a Glasslite “Star Wars: Droids – VLIX” 4-1/2-inch action figure, AFA-graded 40 G (archival case), is encapsulated on a Brazilian blister card and copyrighted “1988 Lucasfilm Ltd.” From a Brazilian consignor, it is estimated at $20,000-$35,000. An SB Products unlicensed action figure “Blue Stars Uzay” is an all-blue 3-3/4-inch Turkish version of the iconic Star Wars character Hoth Snowtrooper. The figure is encapsulated on a blister card, is AFA-graded 60 Q-VG (archival case), and is accompanied by a notarized CIB COA. Estimate: $10,000-$20,000