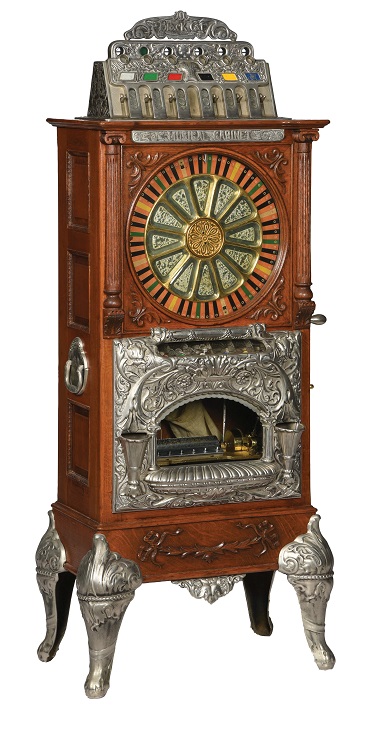 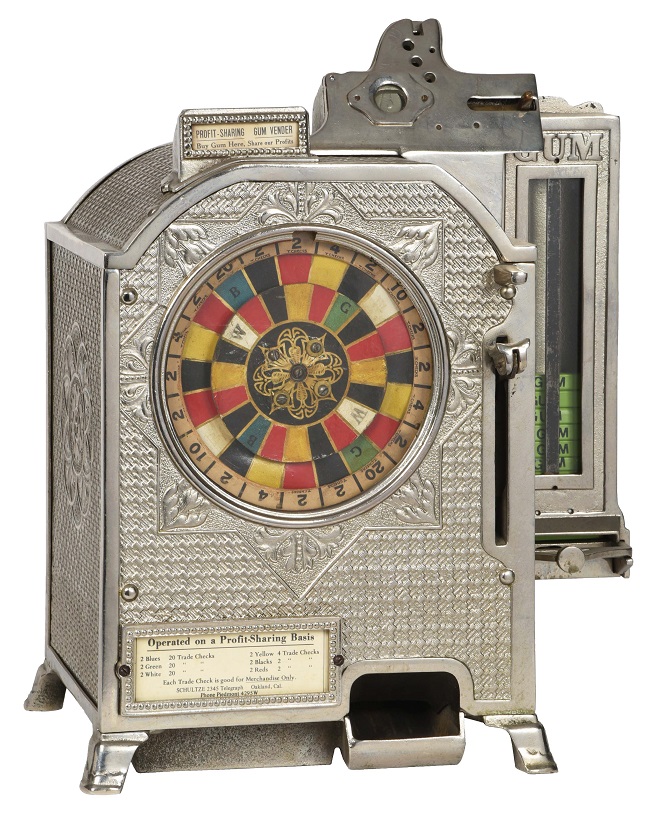 Weeks before the live gallery auction took place, the smart money was already stacked on the table in the form of absentee bids and sign-ups to bid by phone or online through Morphy Live. “This auction included outstanding examples of some of the most elusive coin-operated machines known, many of them coming from the Mel Getlan collection, one of the most authoritative collections of its type,” said Tom Tolworthy, Morphy Auctions’ CEO and curator for the auction. “Collectors were aware that they might never have another opportunity to bid on some of the rarest of gambling, vending, arcade and mechanical music devices, including the Caille Triple Centaur slot machine – the ‘one’ referred to in the description ‘only one known,’ and an extremely rare representation of late 19th century gambling.”

The Triple Centaur – the most highly prized machine in Mel Getlan’s collection – exhibits an extraordinary design that accepts nickels, quarters, and nickels, respectively, in its three separately operating sections. Because the machine is contained within a single oak housing, it enabled operators to increase their revenues substantially while still paying for only one gambling license. In all-original condition, the Triple Centaur had held pride of place in Getlan’s collection since the 1970s. The auction’s odds-on favorite, it sold within its expected price range for $240,000. All prices quoted in this report are inclusive of 23% buyer’s premium.

Also manufactured by Caille Bros., a 1904 Peerless Roulette 5¢ floor model slot machine in a rich oak cabinet with decorative iron castings gave players a choice of seven coin-slots in which to drop their nickels. The interactive experience included pulling a lever to spin the wheel, then watching the ball bounce and finally land on the payout amount. A fantastic original machine with older restoration, it sold within estimate for $186,000.

The condition displayed by another extremely rare Caille production, a 5¢ “Black Cat” musical upright, was nothing short of remarkable. The stately machine retained its original coin head, all correct castings, the original lithographed-tin wheel, and factory music box. It sold at the midpoint of its estimate for $102,000.

Bidders eagerly stepped up to the plate to try their luck on an all-original 5¢ “Little Rip” baseball-theme payout trade stimulator made by Mills Novelty Co. In its decorative cast-iron case with a placard reading “Get in the Ball Game!” this very special machine boasted incredible condition and played perfectly. Against an estimate of $40,000-$70,000, it knocked it out of the park with a selling price of $132,000.

Antique advertising was in great demand, especially lithographs and signage that had rarely or never before been seen in the marketplace. One of the most sought-after selections, a historically significant 1870s Procter and Gamble advertising sign, promoted Amber Soap, a brand that pre-dates even its now-classic Ivory Soap. “It is surprising that this remarkable example of early stone lithography is not in the archives of Procter & Gamble,” Tolworthy observed. In excellent 8.0-8.5 condition, it nearly tripled its high estimate, cleaning up at $28,800.

An even earlier artwork, a pre-1870 lithograph advertising J. Esty & Company Cottage Organs of Brattleboro, Vermont, featured colorful and highly detailed images of factories and organ models. “At its peak, J Estey and Co was one of the world’s largest organ manufacturers and employed approximately 700 people,” Tolworthy noted. The lithograph found favor with collectors and sold for $12,300 against an estimate of $1,000-$2,500.

Soda pop and soda fountain advertising proved the category has not lost any of its fizz, knocking down strong prices on such items as a gorgeous, all-original Art Nouveau-style Pepsi-Cola syrup dispenser. It pumped up the bidding to a very sweet $39,975 against a presale estimate of $12,000-$25,000. A 1935 triangular, double-sided porcelain Coca-Cola hanging sign marked for Tennessee Enamel Manufacturing Co., Nashville, also stopped soda pop collectors in their tracks. An unusual form with wonderful graphics, it even retained its distinctive original wall bracket. The sign attracted 18 bids before changing hands for an above-estimate price of $21,600.

“Our very first three-day coin-op and advertising auction drew a record in-person crowd, and record prices,” Tolworthy said. “With the absence of shows and conventions during this time of social distancing, customers are motivated to add to their collections, and the fresh-to-market collections in our auction certainly filled that need.”