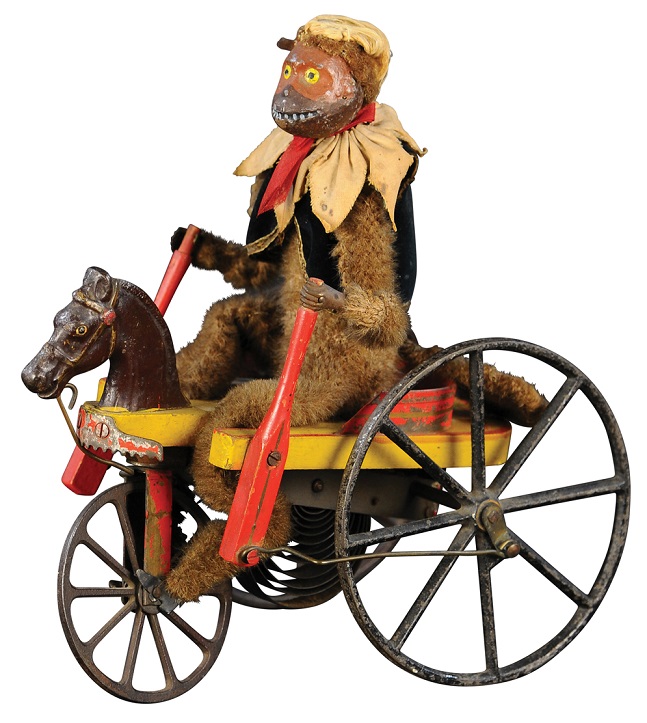 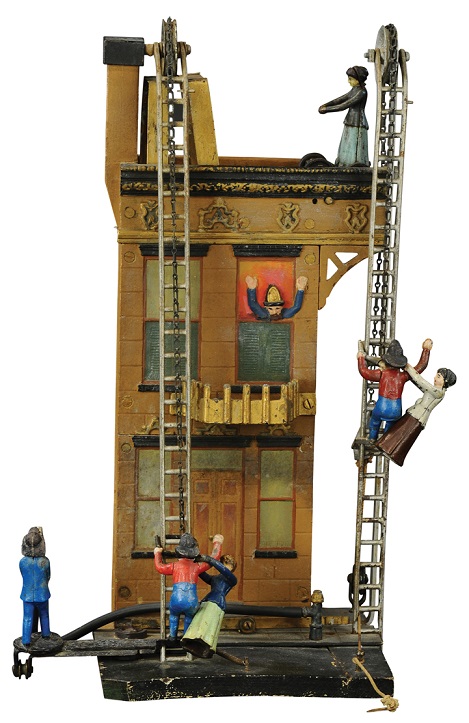 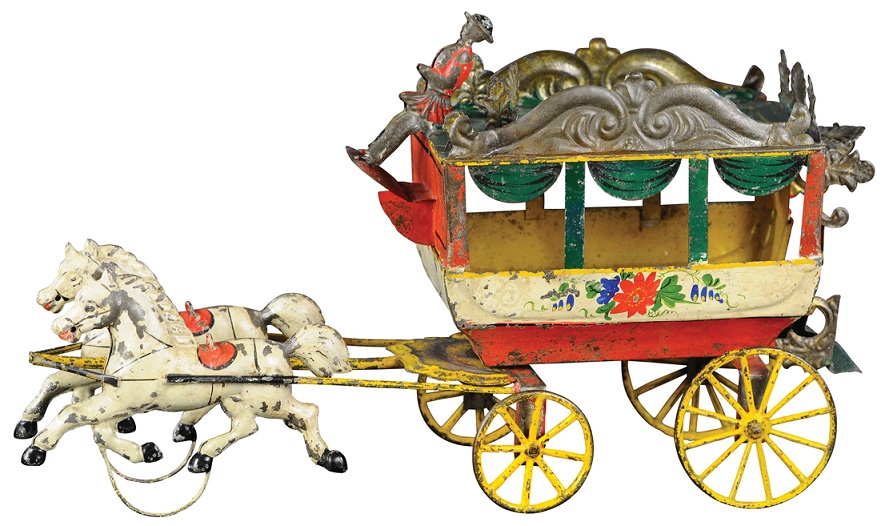 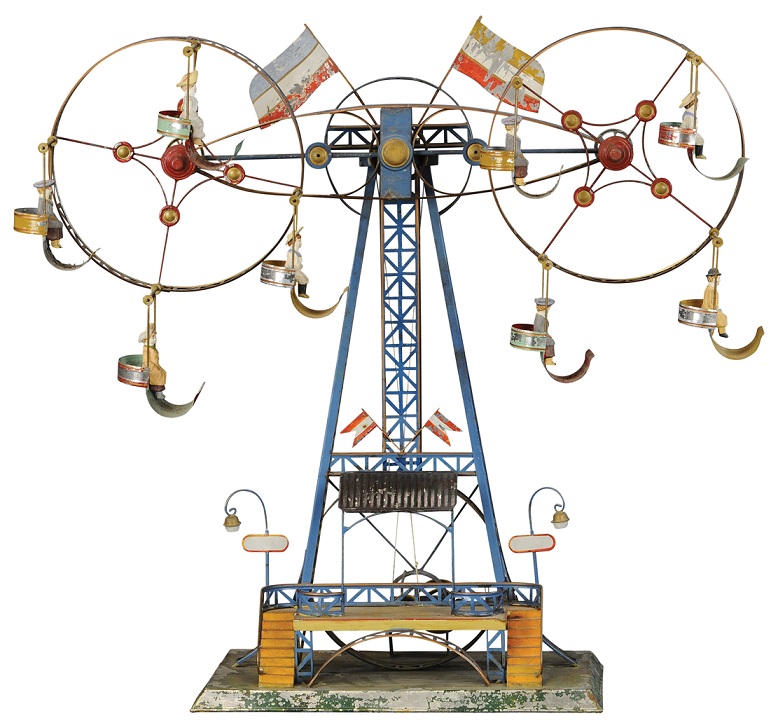 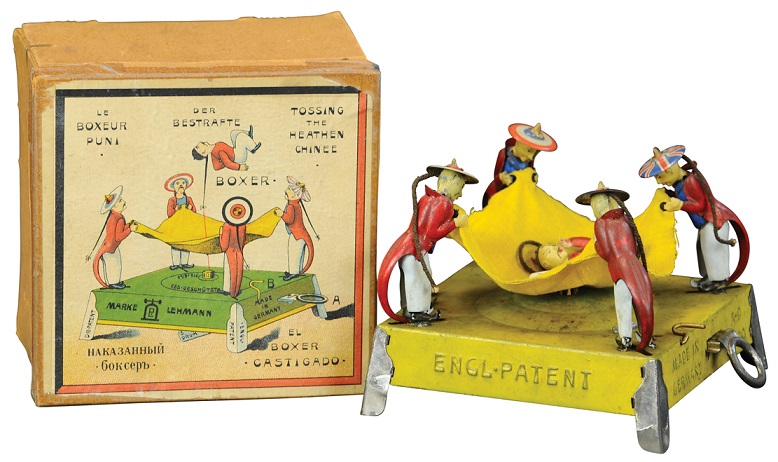 Another illustrious entry will soon join the list of legendary collections that have passed through the portals of Bertoia Auctions’ New Jersey gallery. As confirmed by company president Michael Bertoia, the Aaron and Abby Schroeder mechanical bank and antique toy collection – considered by many to be in a league of its own – will be auctioned by Bertoia’s on March 5-6, 2021, with Part II scheduled for fall of 2021.

The vast private collection encompasses the finest of late 19th to early 20th century American cast iron, including incomparable mechanical and still banks, horse-drawn and bell toys, and rare cap guns and cap bombs. An extraordinary selection of early American tin and clockwork toys, including museum-worthy classics made by Ives, is beautifully complemented by an array of European tin that includes many boxed Lehmann and Martin character windups, tin autos, aeronautical toys and penny toys.

The Schroeders’ impressive Schoenhut wooden toys are ceremoniously ushered in by a grand 46-inch horse-drawn Humpty Dumpty Circus Bandwagon with driver and six liveried musician figures, estimate: $14,000-$18,000. Other American toy highlights include a circa 1906 Carpenter deluxe Burning Building with provenance that includes a descendant of the Carpenter family, $16,000-$24,000; a scarce Ives Monkey Perambulator, $20,000-$30,000; and a mid-19th century Francis, Field & Francis Omnibus that was formerly in the Perelman Antique Toy Museum’s fabled collection. It is estimated at $20,000-$30,000.

“In terms of quality, rarity and importance, the Schroeder collection is on par with those of Donald Kaufman, Max Berry, Dick Claus and the Perelman Museum,” Michael Bertoia said. “The core of the collection was amassed four to five decades ago, when it was still possible to find rare banks and toys in shops and at antique shows and flea markets. In fact, Aaron and Abby made their first purchase – a Stevens ‘Magic Bank’ – for a mere $40 back in 1963.”

The many rare and whimsical European toys in the collection include coveted productions by 19th/early 20th century manufacturers Gunthermann, Marklin, Carette, Lehmann, Martin, Issmayer, Ernst Plank, Bing, and many more. An early 20th century Lehmann (German) “Boxer Rebellion” wind-up tin toy that was inspired by the Chinese Boxer Rebellion is one of the most desirable of all Lehmann toys. The boxed example could command a winning bid of $15,000-$25,000. A charming circa 1894 Fernand Martin (French) “Flemish Dog Cart” wind-up tin toy, pulled by a dog figure and stocked with copper milk cans, retains its extraordinarily rare original box – the only one of its type that Bertoia’s expert consultants have ever seen. In excellent to pristine condition, it comes to auction with a $5,000-$7,500 estimate.

The late Aaron Schroeder (1926-2009) and his wife and business partner of 49 years, Abby Steinberg Schroeder, wielded influence and garnered worldwide respect both in business and philanthropy, just as they did in the playful world of antique toys and banks, for which they had a great passion.

Aaron’s multifaceted career in the music industry was one that grew from his prodigious talent as a songwriter. Many prominent vocalists recorded his songs, including Frank Sinatra, Nat “King” Cole, Tony Bennett, Chaka Khan, Carl Perkins, and the Beatles. Elvis Presley recorded 17 of Aaron’s songs. Five became No. 1 hits. In 1960, Aaron launched music-publishing and record-production companies and, together with Abby, developed, guided, produced and/or managed the careers of numerous top tier artists, including Gene Pitney, Barry White, Randy Newman, Al Kooper, and Jimi Hendrix.

As vice president of the Schroeder businesses, Abby established 12 overseas corporations from the ground floor up, participated in the recording process of their artists and became a master at artist representation, copyright law and contract negotiation. Today, she continues her work as a crusader for songwriters’ rights and uses her business skills and connections to benefit The Actors Fund. She also gifted The Actors Fund with some of the toys that had been displayed at the Schroeders’ American Museum of Antique Toys in Great Barrington, Massachusetts. That particular collection will be auctioned by Bertoia’s in fall 2021 to benefit The Actors Fund, during the same week that Part II of the Schroeders’ private collection is offered.

All traditional forms of bidding will be available for the March 5-6 auction, including in person at the gallery, by phone, and absentee or live online through Bertoia Live or LiveAuctioneers. Auction seating will be available by reservation only, and in full accordance with CDC safety guidelines. Private previewing in advance of the sale is available by appointment only. For additional information on any item in the auction, to book a phone line, or to make a preview or auction day seating reservation, call (856) 692-1881 or email toys@bertoiaauctions.com and online at www.bertoiaauctions.com.