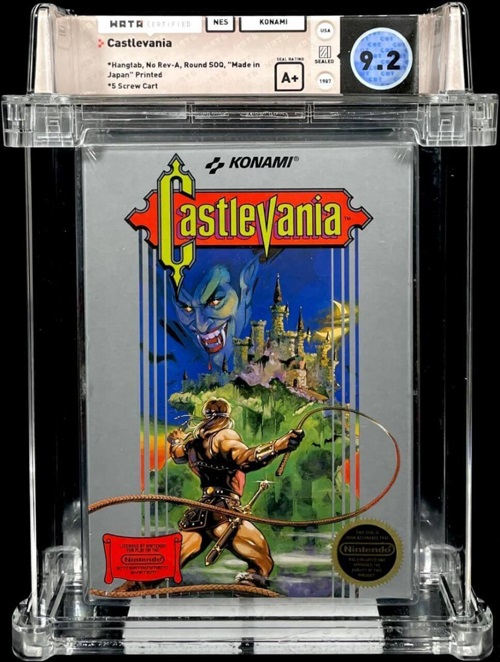 “The high-end video game market is booming with a Super Mario 64 recently breaking the world record at $1.56 million dollars,” ComicConnect COO Vincent Zurzolo said. “Along with Mario and Zelda, Castlevania is one of the most-sought after classic video game franchises and when it comes to rare NES games, a sealed Castlevania is one of the absolute toughest of finds.”

The first entry in the groundbreaking horror franchise, this copy of Castlevania is one of only five known certified copies and it has an elusive third party hang tab to boot.

“Third party copies were produced by companies other than Nintendo, and often included built-in tabs for hanging on store shelves,” Zurzolo said. “These tabs were almost always immediately popped open to hang games on wire shelves, making this copy a nearly miraculous find.”

The box cover art, inspired by Frank Frazetta’s classic 1970s painting “The Norseman,” features the first appearance of Simon Belmont. Simon would go on to star in future Castlevania entries, and as well as crossing over into other game franchises and cartoons in the decades since.

“This game details his quest to destroy the legendary vampire Count Dracula and is considered one of the best video games of all time,” Zurzolo said.

ComicConnect is offering many other games in their upcoming Video Game Auction.