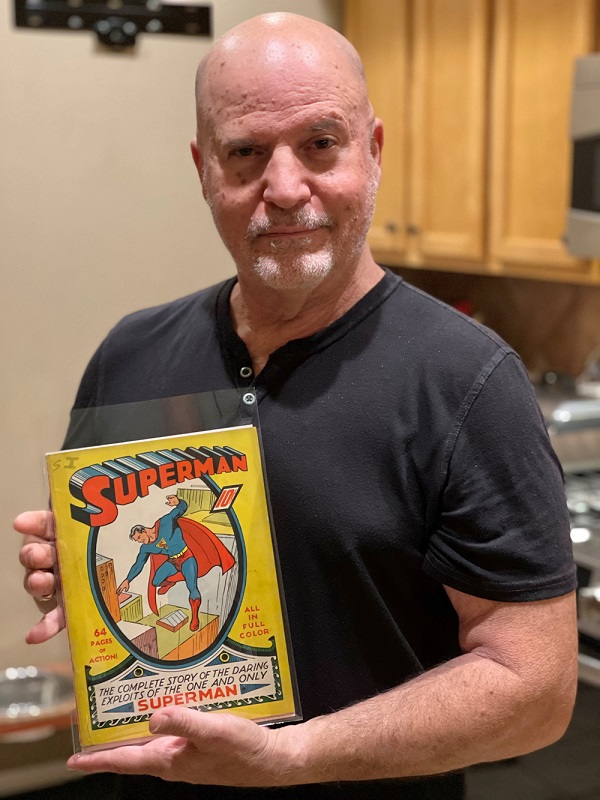 In an upcoming auction, ComicConnect will offer a copy of Superman #1 that has been out of the market for 40 years, has ties to Metropolis Collectibles, and a romantic story.

Twelve years ago, Mark and Sara Michaelson – both serious collectors – met at New York Comic Con, at the Metropolis Collectibles booth. According to Metropolis, Mark was a long-time client of Metropolis and immediately fell for Sara’s smile and taste in comics (Superman, Wonder Woman, and Teenage Mutant Ninja Turtles). Sara fell for Mark and four years later, on NYCC weekend, they married. Although they live in Houston, they return for the convention and the Metropolis booth every year.

This year, they brought something extra: Mark’s copy of Superman #1, the iconic superhero’s first self-titled comic. It was published in 1939, following the enormous success of Action Comics #1, which marked Superman’s first appearance.

“This is an incredibly important and immensely valuable comic,” Vincent Zurzolo, co-owner of Metropolis and ComicConnect said. “Superman pioneered the entire superhero genre. There would be no Batman, no Spider-Man, no blockbuster movies or any of our favorite shows without him.”

Michaelson purchased his Superman #1 in 1979 from the original owner who insisted that he would only sell the book to someone who would treasure it as much as he did. After more than 40 years, the semi-retired healthcare executive is selling his copy. Zurzolo will conduct the auction at ComicConnect, with bids starting November 22.

“This copy is gorgeous and one of the nicest I’ve seen. Investment collectors expect it to break the million-dollar mark at auction as Superman #1’s this nice rarely come up for sale so once word gets out, every serious collector and investor will be planning their bidding strategies as well as their budgets,” Zurzolo said.

For assistance with creating an account, ComicConnect can be reached by calling toll free (888) 779-7377 or emailing robr@comicconnect.com with questions with consignments.