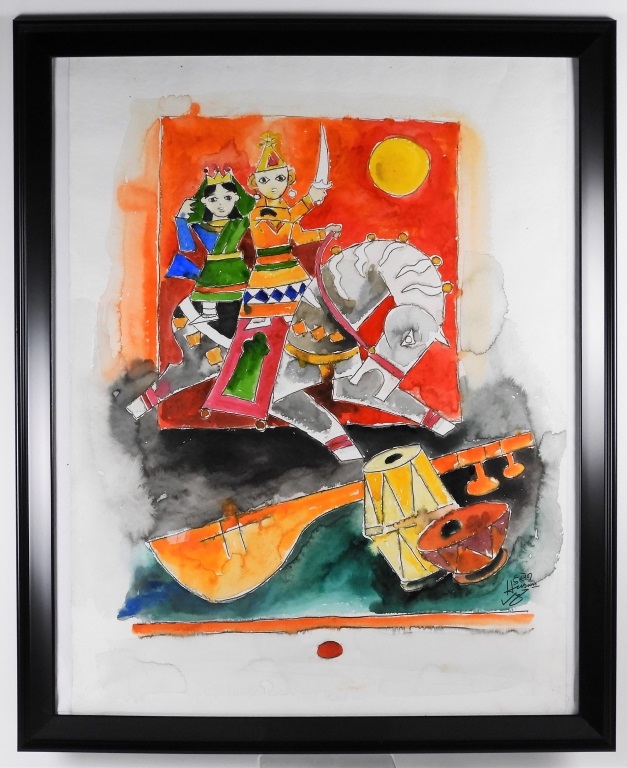 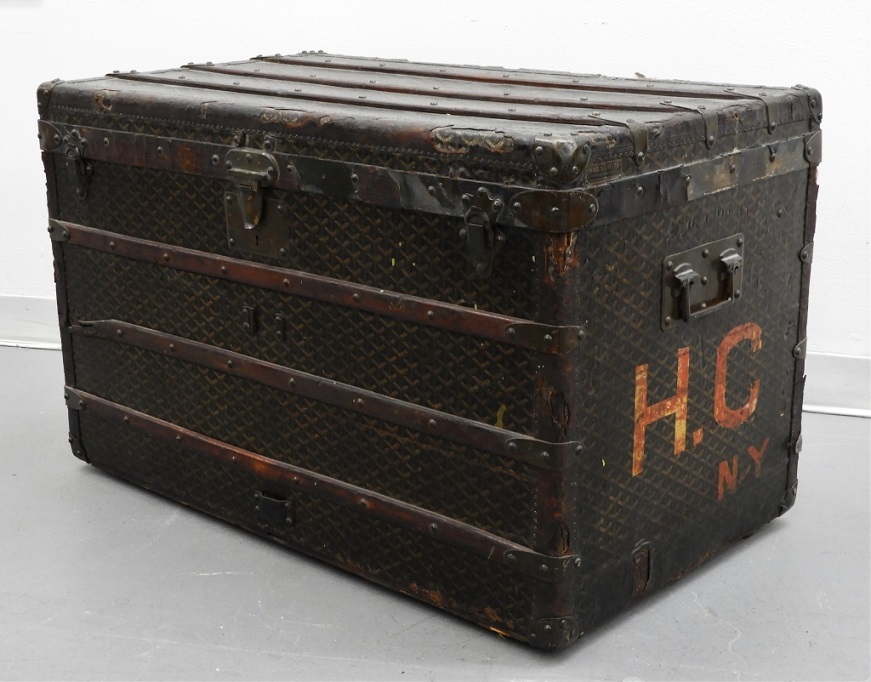 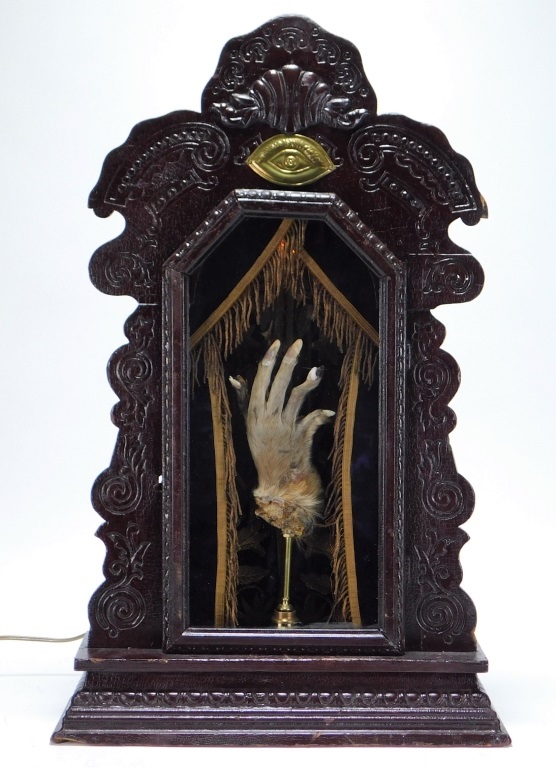 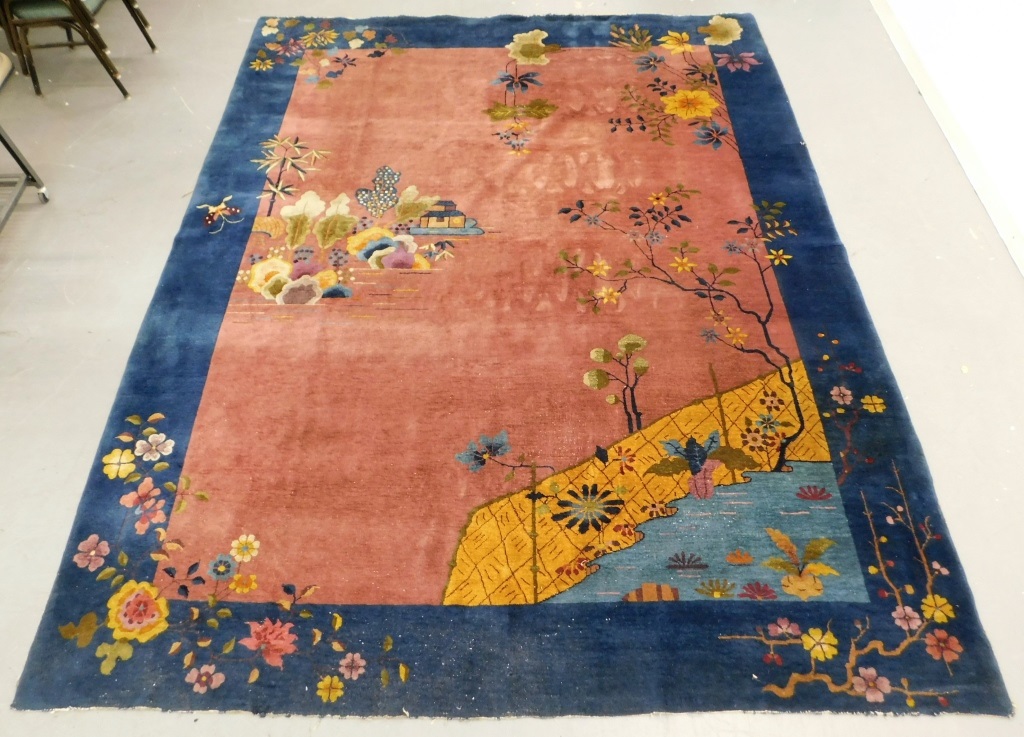 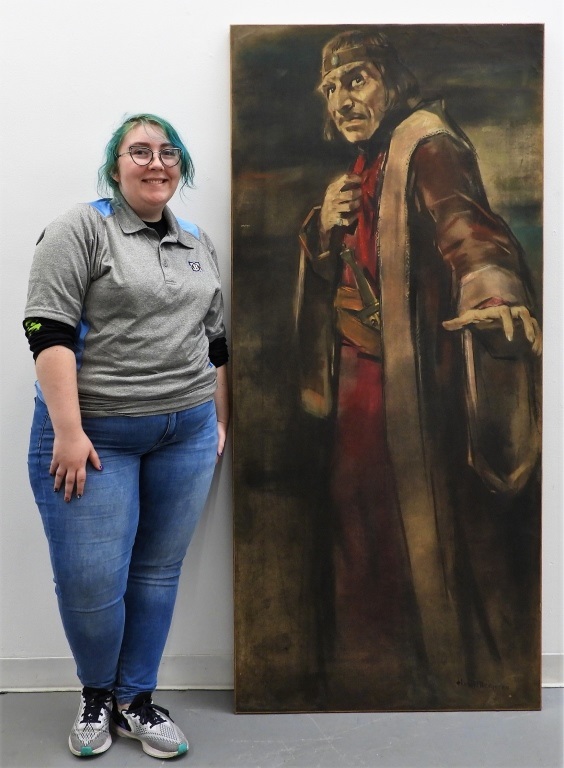 Both artists have appeared in past Bruneau & Co. auctions. In September, an oil on canvas Cubist painting by Husain, depicting a rider on the back of a wild horse, sold for $43,750. In March 2020, an equestrian-themed watercolor on paper by Husain realized $16,250. In that same auction, a figural oil on canvas by B. Prabha, titled Woman with a Pear Basket, brought $11,875.

The B. Prabha painting in the November auction was the expected top lot, but it still sailed past its $15,000-$20,000 estimate to sell to an eager bidder. The work depicted six Indian women with their hair tied back and long limbs, walking through a village, 30-1/2 inches by 77-1/2 inches. It was signed by Prabha’s agent, Nayana Sarmalkar, and came with a certificate of authenticity.

“It’s always nice to see an appreciation for a beautiful painting, as the Prabha soared over the estimate and sold to a collector in Illinois,” Kevin Bruneau, Bruneau & Co’s president and an auctioneer, said. The painting was by far the top achieve of the over 325 lots in the auction.

The Husain watercolor depicted a man and woman in bright polychromatic outfits on the back of a white horse. Housed in a 33-inch by 27-inch frame, it sold within estimate. Dubbed “the Picasso of India,” Husain started off painting billboard signs in India but quickly developed his own style by blending together folk, tribal, and mythological arts.

The auction featured fine items pulled from prominent estates and collections across New England, to include artwork, decorative arts, collectibles, Asian arts and other objects.

“Internet competition was fierce,” Bruneau & Co. auctioneer Travis Landry said. “This was a great auction to round out 2021. The last two auctions will be Historic Arms and Militaria and then Comic, Toy, TCG & Sports on December 11 before the holidays. It was great year for us.”

Following are additional highlights from the auction. Internet bidding was facilitated by LiveAuctioneers.com, Invaluable.com, Bidsquare.com, bidLIVE.Bruneauandco.com and the Bruneau mobile app on iTunes or GooglePlay. All prices quoted include the buyer’s premium.

A mixed media portrait painting mounted to canvas, signed by Han Van Meegeren (Netherlands, 1889-1947), depicting a man in a robe clutching his chest as he stares off into the distance, 73 inches by 33 inches, finished at $5,938. Meegeren was known for his forgeries of famous works by Frans Hals, Pieter de Hooch, Gerard ter Borch and Johannes Vermeer, among other artists.

A late 19th/early 20th century Malles Goyard large rectangular French steamer trunk that opened to one removable tray with two lidded compartments brought $5,312. The trunk was marked, "Malles Goyard 233 Rue Saint Honore Paris Monte Carlo Biarritz” on a metal tag and "Goyard” on the top of the lid. Each side was initialed “H.C.” in red letters.

An Odd Fellows taxidermy baboon hand lamp, made in the United States in the late 19th or early 20th century, 22-3/4 inches tall, changed hands for $4,375 (blowing past its $250-$400 estimate). The taxidermy baboon hand was surrounded by deep purple velvet inside a clock case decorated with acanthus leaves and a brass eye. The Odd Fellows was a non-political, non-sectarian fraternal order founded in 1819 in Baltimore by Thomas Wildey.

A gorgeous Chinese Art Deco rug, made circa 1920 and measuring 11 feet 7 inches by 9 feet 2 inches, featuring a blue, green, yellow, red and purple pictorial landscape over a red field surrounded by blue borders, sold to a determined bidder for $4,062. It, too, easily bested its estimate of $800-$1,200 by about fourfold, despite some minor wear.

Fetching the same amount was an early 20th century, German-made F & R Enders 4/4 violin, with a label marked “F & R Enders Reproduction of Nicholas Gagliano” to the interior. The instrument, one of several in the sale, featured a spruce face with an ebonized finger board and chin rest. The back consisted of a single piece of tiger maple.

To learn more about Bruneau & Co. Auctioneers and the firm’s calendar of upcoming events, visit www.bruneauandco.com. Updates are posted frequently.