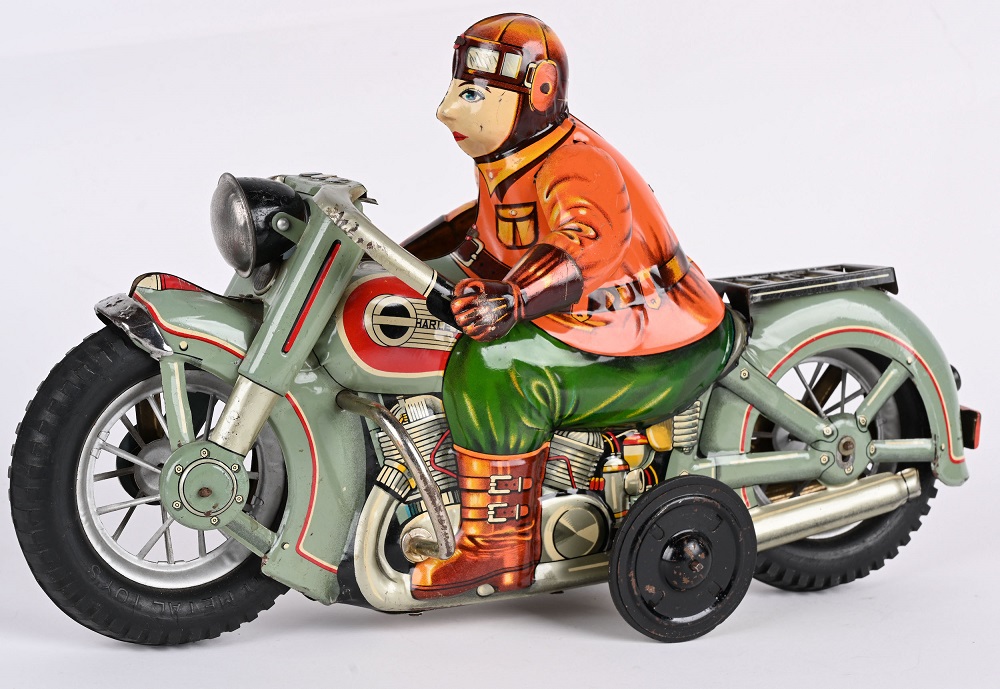 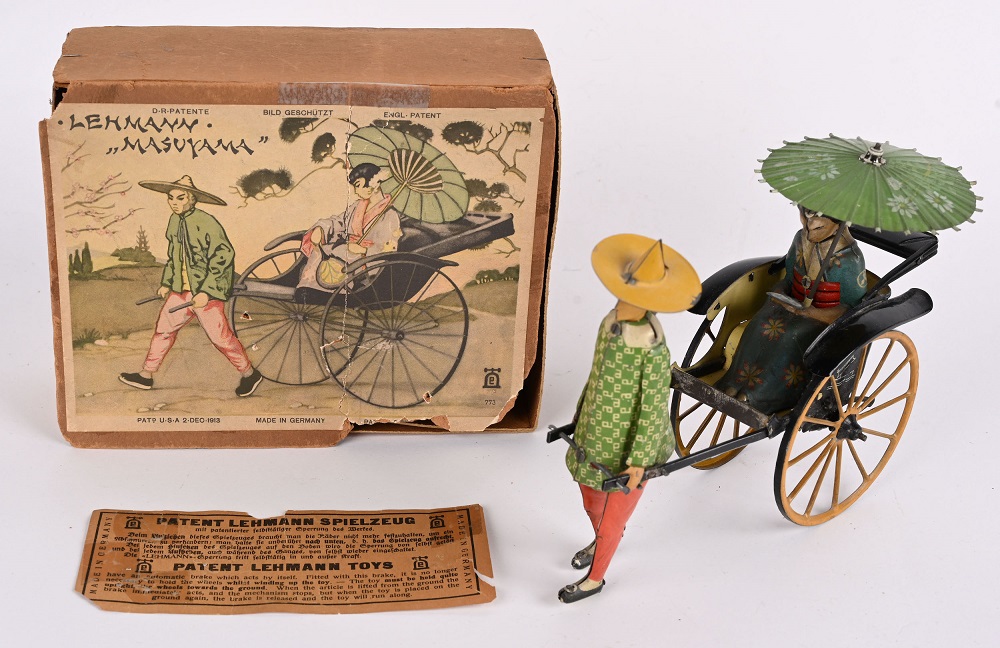 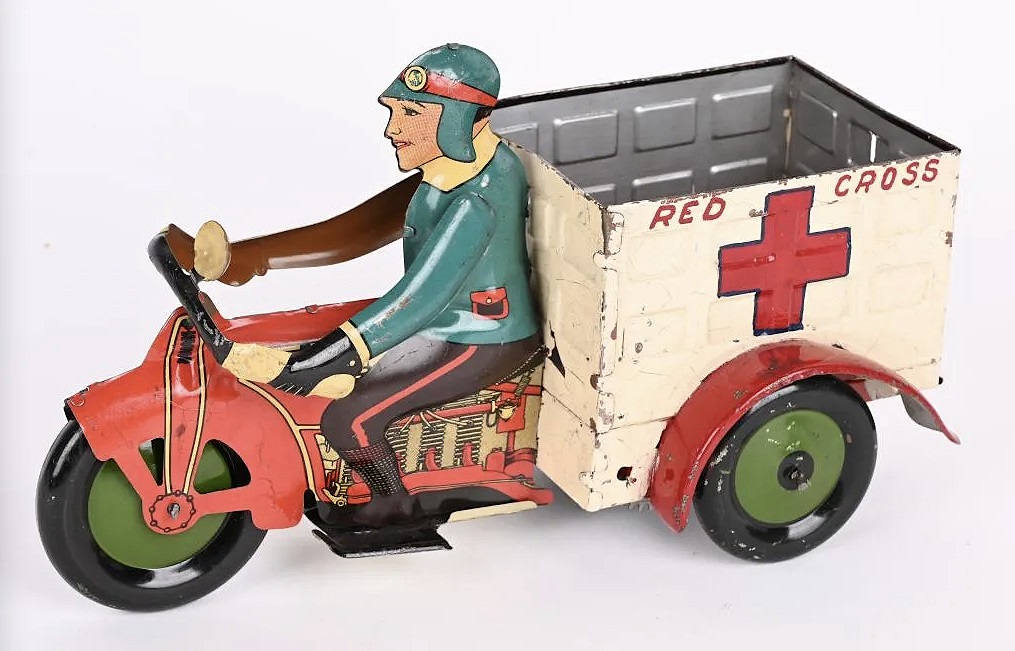 Antique and vintage toys played a major role in Milestone Auctions’ success in 2021. Their October 2, 2021, toy event rocketed to $768,000, a house record for the suburban Cleveland, Ohio, company. Milestone is on track to keep that positive momentum going in 2022 with an 867-lot Winter Antique Toy Spectacular on January 29.

The motor pool will be ready to spring into action when the sale begins at 10 AM, with top-notch examples of American, European and Japanese cars, racers, trucks, vans, buses, fire toys and work vehicles awaiting their new owners.

The demand for toy motorcycles has been insatiable, and strong prices continue to be paid for rare, early examples in superior condition. The January event includes nearly 130 tempting bikes, including many that have their original factory boxes. Leading the pack is a Marx windup Indian motorcycle with sidecar. All original and in like-new condition with bright, appealing colors, it retains its crisp original box with the image of an early Indian bike whizzing along with a passenger in tow. It is said that the toy being auctioned by Milestone was discovered in a collection of parts and accessories at an old Indian motorcycle dealership (the Indian company ceased operations in 2003). The toy is estimated at $4,000-$6,000. Coincidentally, in the same auction Milestone is offering not only Marx’s prototype of the Indian sidecar bike – lot 349, estimate $4,000-$6,000 – but also an example of the German-made Greppert & Kelch (G&K) toy that Marx copied to develop their own branded version. The G&K toy is listed as lot 350 and is estimated at $4,000-$6,000.

Yet another important Marx prototype is a windup Red Cross motorcycle with a rider and Red Cross-branded box on the back. It has hand-painted details, as one might expect of a prototype, and is poised to sell for $6,000-$8,000.

Joining the array of bike highlights is a 15-inch-long I.Y. Metal Toys (Japan) friction Harley-Davidson that is widely regarded as one of the most desirable of all toy motorcycles. This all-original postwar beauty boasts a rich color palette and an attention to detail that is rarely seen on any type of toy. The presale estimate is $3,000-$4,000.

“Motorcycle collectors will want to take their time browsing through the auction catalog,” Milestone Auctions co-owner Chris Sammet said. “The variety is outstanding, and there are absolutely no apologies to be made for condition. This is a really nice selection of antique and vintage bikes, with several models included that hardly ever turn up at auction.”

One of the more unusual entries is an English production that features both male and female clown riders. This 9-inch windup is marked “Made in GT Britain” on its gas tank and is in excellent condition. It comes to auction with a $1,000-$1,500 estimate.

Early American cast iron toys are in a league of their own, and in the January 29 sale Milestone is pleased to offer several classic pieces from premier manufacturers. A Pratt & Letchworth four-horse four-seat brake with eight passenger figures measures a display-worthy 28-1/2 inches long. It has a lively presence and will be trotting across the auction block with an $8,000-$12,000 estimate. Another super-size production, a late 19th century Wilkins cast-iron water tower fire wagon makes quite a statement at 44 inches long. It is, in fact, the largest cast iron toy ever produced. To appreciate the magnitude of its scale, each of its three horses is an impressive 10-1/2 inches long. In spite of its age, this handsome, all-original toy has no cracks or breaks. Estimate: $4,000-$6,000

A cast iron architectural marvel, Arcade’s gorgeous Century of Progress bank was made expressly for the 1934 Chicago World’s Fair. Quintessentially Art Deco in style, its original cream and blue painted finish has survived beautifully, and it has no cracks or breaks. This scarce bank, measuring 7 by 5 inches, is almost never found in such near-flawless original condition. Milestone will offer it with a $1,200-$1,500 estimate.

Hefty pressed steel toys conjure pleasant playtime memories for many who grew up in the post-World War II era. They remain very popular as collectibles and have become a staple in Milestone’s toy sales. The January 29 event is the place to look for such gems as a Sturditoy 30-inch-long wrecker truck with original paint and decals, $1,500-$2,000; and a 13-inch-long Smith-Miller Coca-Cola delivery truck. Near-mint and complete with all of its cases of Coke bottles, it comes with the bonus of its original Smith-Miller box. Estimate: $800-$1,000

Milestone’s Saturday, January 29, 2022, Winter Antique Toy Spectacular auction will be held at 38198 Willoughby Parkway, Willoughby, OH 44094. Start time: 10 AM ET. All forms of bidding will be available, including live via the internet through Milestone Auctions’ bidding platform or LiveAuctioneers. For additional information, call (440) 527-8060 or email info@milestoneauctions.com and online at www.milestoneauctions.com.