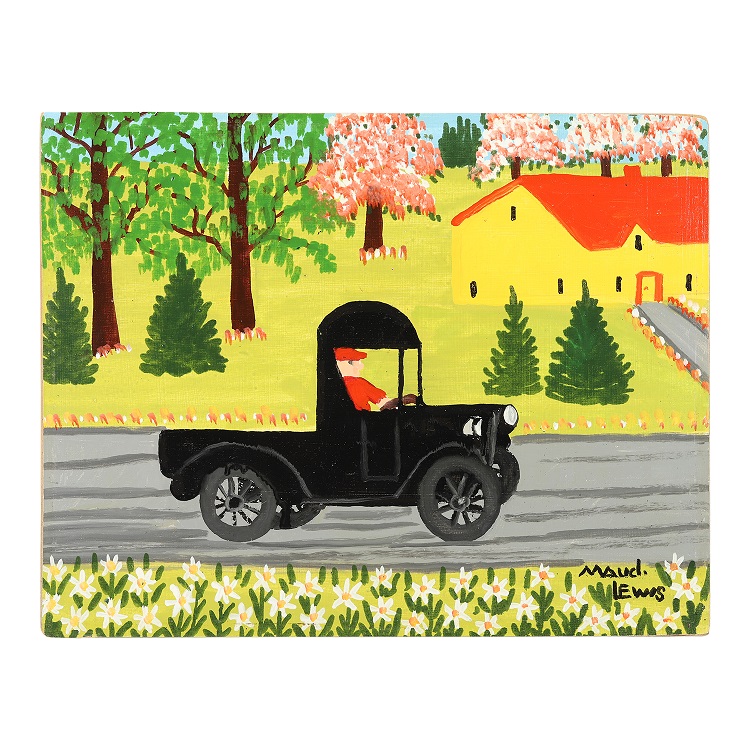 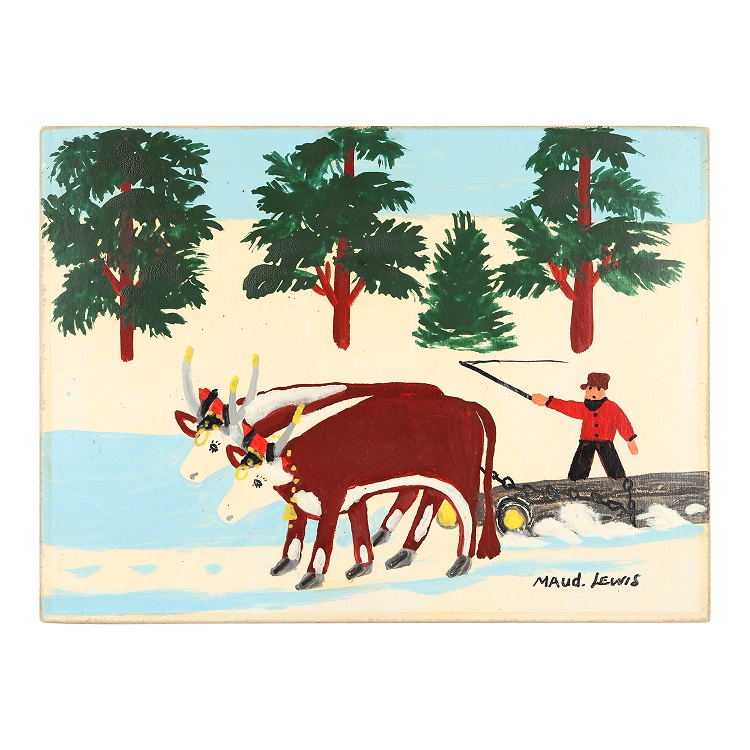 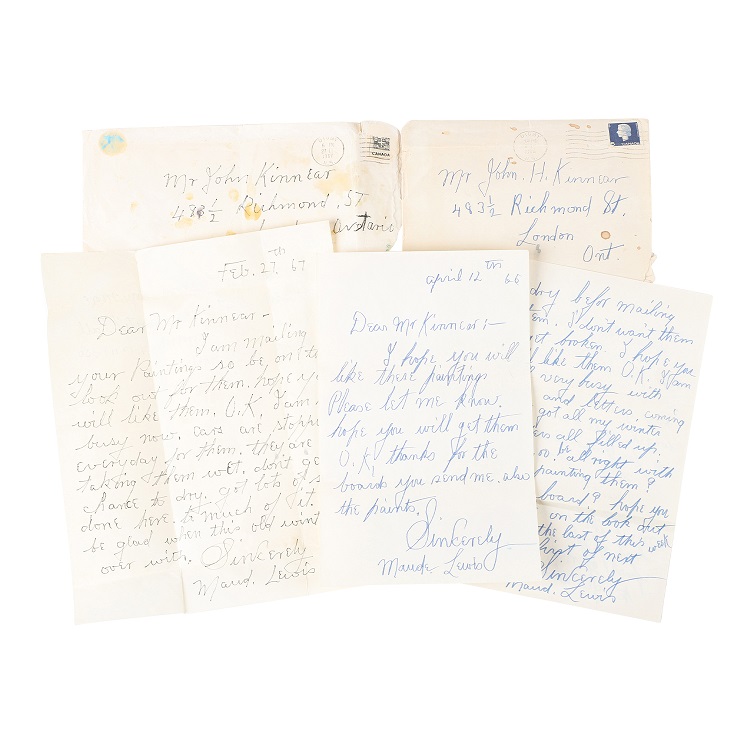 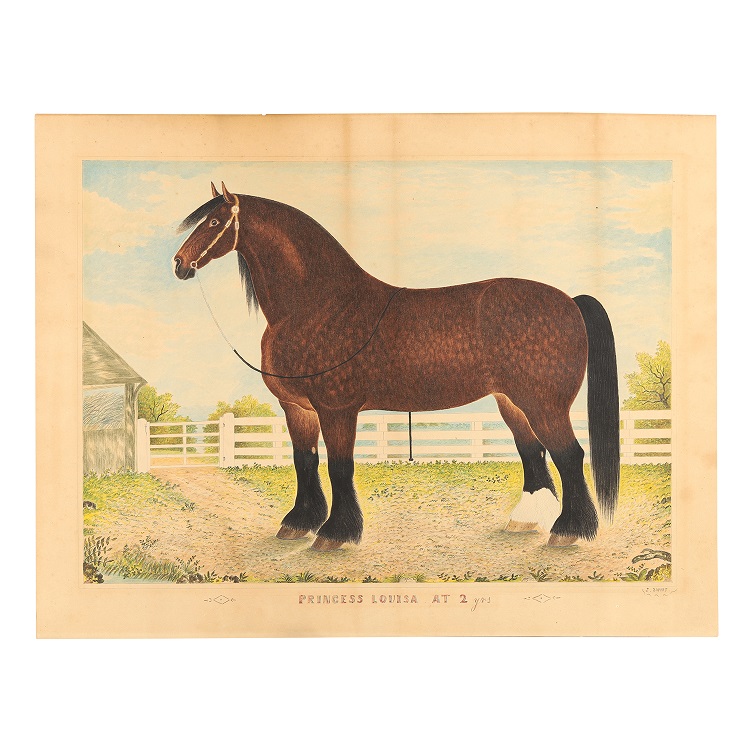 A pair of oil on board paintings by the Canadian folk artist Maud Lewis (1901-1970) blasted through their presale estimates to finish at a combined $501,500, and a group of letters written by Lewis to a fellow artist and confidante hit $82,600 in an online Canadiana & Decorative Arts auction held May 14, 2022, by Miller & Miller Auctions. Ltd.

All prices quoted in this report are in Canadian dollars.

Easily the top lot of the 407-lot auction was Lewis’s Black Truck, painted in 1967, an oil on Masonite board measuring 11 inches by 14 inches. The springtime painting, showing a black truck, daffodils, blossoming cherry trees and a house, had an estimate of $30,000-$35,000, but aggressive bidders ultimately bested even the high estimate figure tenfold.

“In a time of great turmoil and change, the art world lived vicariously through Maud Lewis and her art, setting three new world records with the three lots offered, including the highest, Black Truck, at $413,000,” Ethan Miller of Miller & Miller Auctions said. “It raises the stage for her works to unimaginable heights.”

The other Lewis rendering was one titled Oxen Pulling Logs, also from 1967. This was an interesting work by the artist, as it was somewhat simpler in the amount of subject matter. It featured a snowy scene of a driver with oxen hauling logs, with prominent evergreen trees in the background. The vibrant 12-inch by 16-inch work changed hands for $88,500.

Wedged between the two paintings was lot 336, a group of three letters from Ms. Lewis to John H. Kinnear, dated 1966-1967. Few letters by Lewis exist, and these offered a rare glimpse into her fascinating world. Kinnear, himself an artist, corresponded with Maud Lewis from the time she became famous, in the mid-1960s, up until her death in 1970.

Kinnear would send the artist pre-primed Masonite boards, brushes, and requested paints. In return, Maud would send the finished paintings for Kinnear to sell and he would then return the proceeds to Maud in Marshalltown, her home. In this respect John Kinnear acted like Maud’s agent in Ontario. The letters sold to a determined bidder for $82,600.

The rest of the sale featured art, art pottery, furniture, bronzes and sculptures, folk art, textiles, fruit jars, silver, oil lamps and lamps and lighting. “Categories such as textiles and Canadiana furniture underperformed in this sale,” Mr. Miller conceded. “In these mature collector markets, ‘good’ doesn’t cut it with our audience. It has to be ‘great’ to perform.”

Following are additional highlights from the auction, which grossed CA$948,218. A little more than 500 people registered to bid, on LiveAauctioneers.com and the Miller & Miller website. A total of 7,556 bids were placed, with 98% of all lots sold (19% of lots exceeded their high estimate). Phone and absentee bids were taken.

A circa 1825 powder horn made and signed by John Tansel (1800-1872) was a true slice of Americana, carved with a federal eagle with shielded breast, arrows in one clawed foot and a leafy vine in the other ($22,420). The 11-1/2-inch long cow horn was signed “J.T.” on the side of the eagle. John was the eldest son of the famed Kentucky horn carver Francis Tansel.

There were two Art Deco bronze sculptures by the Romanian sculptor Demetre Chiparus (1886-1947), both of them chryselephantine bronzes depicting female dancers with arms outstretched. One, a rare, early 20th century cold painted and bone mounted (chryselephantine) figural bronze, 17-1/4 inches tall, made $8,850. The other, a gilt bronze, bone mounted figure, 23-3/4 inches tall, brought $5,900 Both were signed “D.H. Chiparus – Made in France.”

Rounding out this short list of auction highlights, a birds-in-cage automaton, consisting of a large size gilt brass cage enclosing two moving and singing songbirds on a perch (French/German, circa 1900), 20 inches tall, fetched $8,260; and a beehive pint fruit jar, likely Canadian, circa 1900, clean and clear with a zinc band and aqua lid, rose to $7,080.