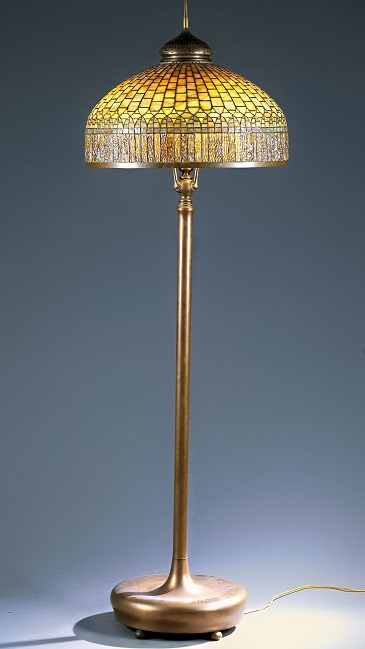 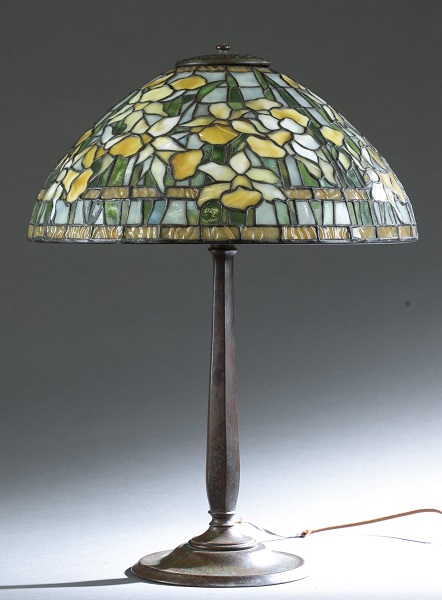 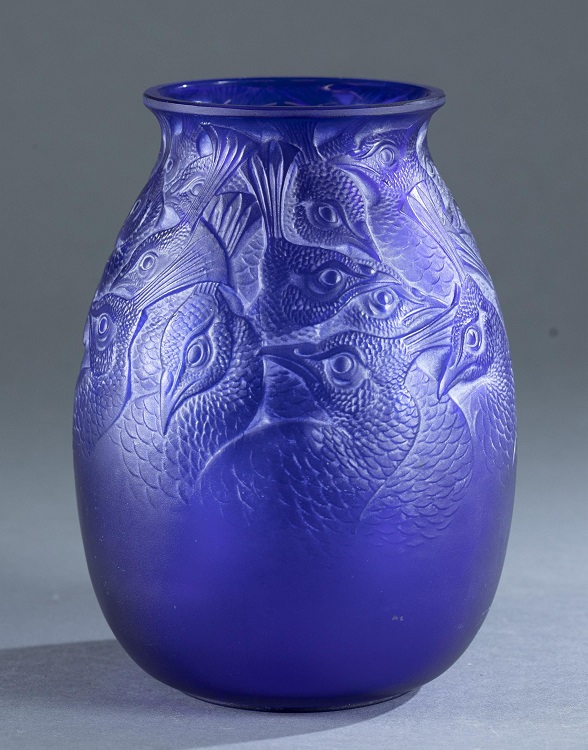 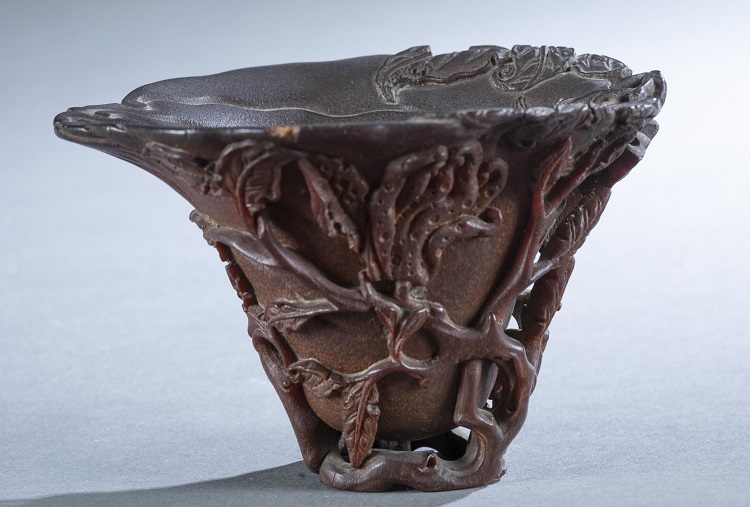 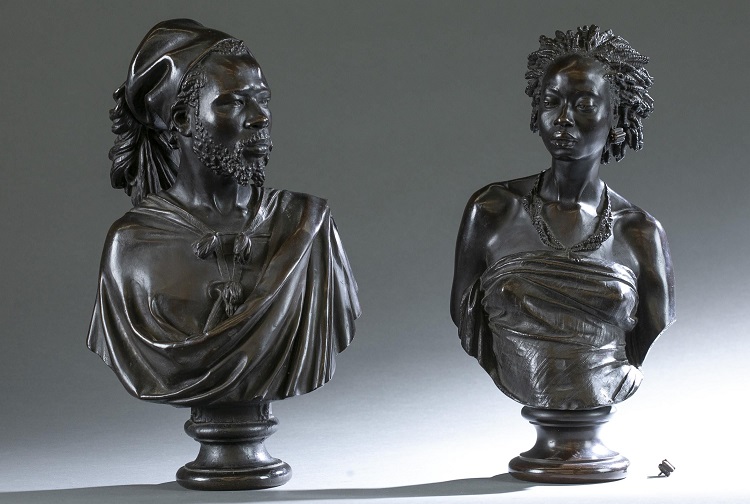 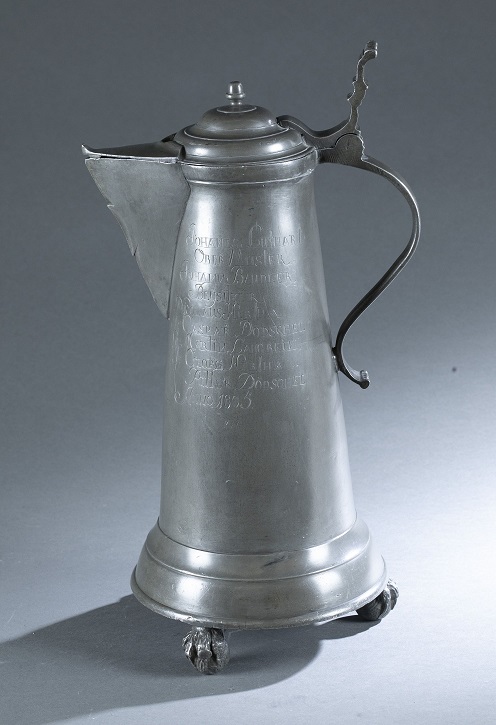 The Tiffany Studios lamps are led by a Curtain Border floor lamp, 77-1/2 inches tall, of yellow and green leaded glass with a diamond band and curtain border shade on a bronze base. Tiffany markings appear on both the shade and base. Sourced from a Baltimore-area estate where it had resided since the early 20th century, it comes to action with a presale estimate of $40,000-$60,000.

A 9-inch-tall Rene Lalique “Borromee” blue molded-glass vase exemplifies a model first introduced at the height of the Art Deco era, in 1928. Peacocks decorate the circumference of the vase, and its base is stencil-etched R. Lalique France. This highly desirable vessel is expected to achieve a winning bid in the $10,000-$15,000 range.

The sizable array of modern seating includes several designs by Finn Juhl, including a Chieftain chair and ottoman manufactured by Baker. Of black leather with wood framing, the chair is marked on the bottom and is expected to reach $3,000-$5,000. A pair of teak lounge chairs Juhl designed for France and Sons is upholstered in red fabric and has a wood frame and tapered legs; and a set of two Model 48 armchairs designed jointly by Finn Juhl and Niels Vodder is made of brown leather with a two-tone maple and walnut wood frame.

The rest of the sale is packed with Asian, American, European, and Modern art, including artworks by by Itzchak Tarkay, Francisco Zuniga and others; bronzes, antique pewter pieces, porcelain and fine jewelry; sterling silver from Dominick & Haff, S. Kirk and Son, Lunt, Tiffany & Co., and others. The Asian arts category is replete with Chinese porcelain, jade, bronze censers, Japanese lacquerware, and Chinese paintings and scrolls.

A 17th century Chinese libation cup is finely carved with the sanduo (three abundances) of the pomegranate, peach and lychee, as well as fingered citron (also called “Buddha’s Hand”) and leafy gnarled branches that rise from the base. An early 17th century cup of this style is held in the collection of the Metropolitan Museum of Art and was gifted to the institution in 1908. Early and important, the libation cup offered by Quinn’s is estimated at $20,000-$30,000.

A large, 18th century German pewter guild flagon, made around 1750 by Master Pewterer Johann Heinrich Misselwitz of Gera, Germany, stands 19-1/2 inches tall. The flagon’s body is engraved on both sides of the spout with the names of the original founding guild members and the year 1605. According to the City Museum of Gera, the vessel was a replacement for the original guild flagon that was lost or destroyed 150 years earlier. Provenance: Allan Fogel collection. Estimate $6,000-$8,000

A bronze sculpture by Harriet Whitney Frishmuth (American, 1880-1980), titled The Star, depicts a graceful nude woman reaching upward. The work is stamped on the base, Harriet Frishmuth 1918 and Gorham Co. Founders 0505 #36 on the side of the base. Standing 20 inches tall, this quintessential Frishmuth sculpture should command $4,000-$6,000.

Quinn’s Saturday, June 4 Fine & Decorative Arts auction will begin at 10 AM ET. No in-person floor bidding will be available. All bidding will be remote, either by phone, absentee, or live via the internet through LiveAuctioneers or Invaluable. Absentee bids may also be place through Quinn’s website via HiBid. An open preview will be held at the auction gallery (360 S. Washington Street, Falls Church, VA), Tuesday, May 31, through Friday, June 3, from 11 AM to 4 PM. For additional information about any item in the auction, call Jordan Karlstrand at Quinn’s at (703) 532-5632, ext. 571 or email jordan.karlstrand@quinnsauction.com. Bidders can visit Quinn’s online at www.quinnsauction.com.