Sunday, August 7, 2022
Scoop is a totally free e-newsletter, produced for the benefit of the friends who share our hobby!
Home 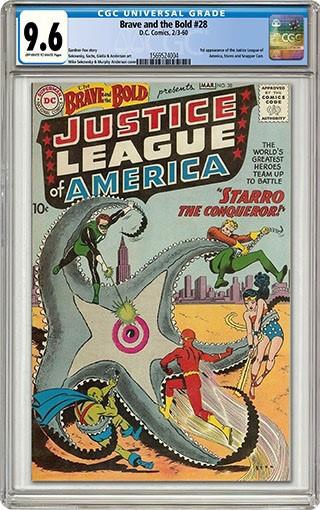 A copy of Brave and the Bold #28 CGC 9.6, featuring the first appearance of the Justice League of America, has sold for $750,000. The comic traded hands in a private sale, according to CGC, and set a new record for the book.

This copy was originally owned by Rob Rong who sold it to Tony Arnold of TonyeTrade Enterprises, and the sale was facilitated by Richard Evans of Bedrock City. It beat the previous record of $120,000, set in 2014 by a CGC 9.2 graded copy.

At CGC 9.6, this copy is the highest grade in the CGC Census. Just below that, there’s one graded CGC 9.4 and three graded 9.2.

Superman, Wonder Woman, Batman, Flash, Green Lantern, Aquaman, and Martian Manhunter came together as the Justice League to fight Starro the Conqueror. The memorable cover shows the heroes (minus Batman and Superman) engaged in a battle with the giant alien. It was DC’s first major team-up since the Golden Age’s Justice Society.