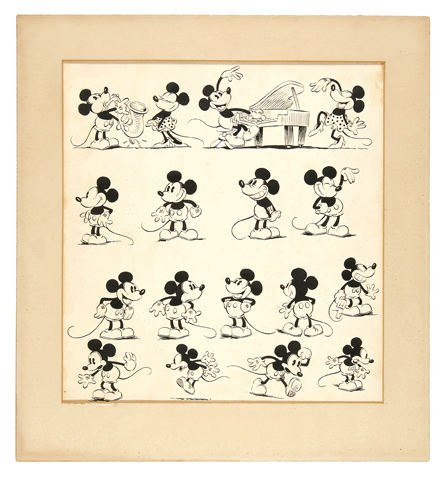 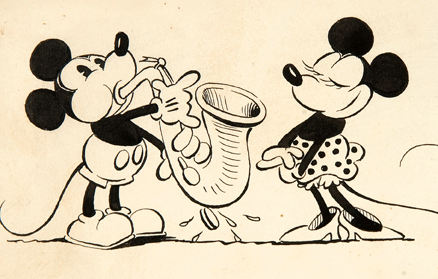 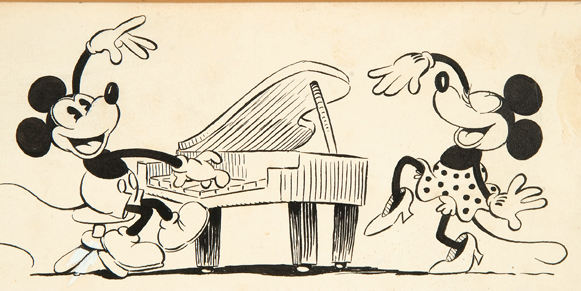 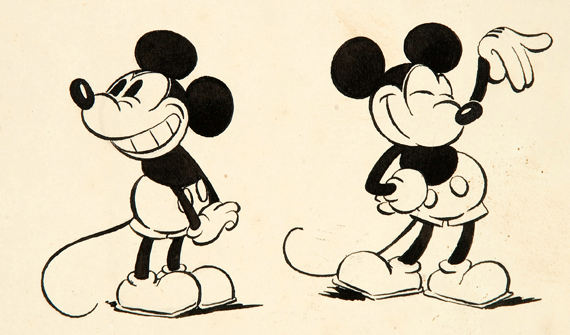 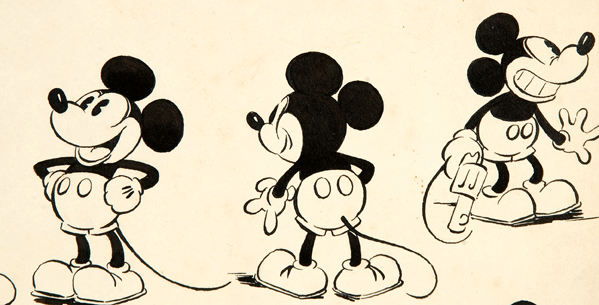 Over the years, Hake’s Americana & Collectibles, of Geppi’s Entertainment Auctions, has built a reputation for the selection of Disneyana and original Disney art in each of their auctions. Hake’s continues their streak of great vintage Disney offerings in their current auction, in which they are selling a true rarity: an early model sheet featuring Mickey Mouse.

The pen and ink illustrations are estimated by Hake’s to have been done around December, 1929. The back is marked "King Feature" in pencil, the art appearing to have been initially prepared with King Features Syndicate in mind. Its first public use seems to have been in King Features advertising for the launch of the Mickey Mouse daily newspaper strip on January 13, 1930.

These drawings then went on to serve as the initial reference guide for Wilfred Haughton and other British Disney comic artists whose first Mickey Mouse Annual was issued in the Fall of 1930. The drawings were also used with non-comics related Disney press releases and publicity campaigns for various items of domestic and foreign merchandise until the fall of 1931. Notable among these items were the famous Mickey Mouse Rosenthal figurines, with several based specifically on these poses including both of the embarrassed-looking Mickey images (second row, second from right and third row, far right with gun).

The sheet being offered by Hake’s contains a total of fifteen different images of Mickey Mouse and two different images of Minnie Mouse, one being serenaded by Mickey who plays a horn, another showing her dancing as Mickey plays the piano. Hake’s has seen original pencil art by Les Clark (the first of Disney's Nine Old Men) for many of these poses. Most of the poses on this sheet appear to have been done by Clark and Hake’s believes all images to have been inked by Win Smith. The image of Mickey in the third row that shows him with a gun and the bottom four images appear to have been taken from Ub Iwerks' Mickey Mouse daily strips, altered slightly by Smith to look more like Clark's character model.

This exceptional and historic piece of original Disney art featuring great Mickey and Minnie images is now up for bid with the rest of the items being offered in the newest Hake’s auction – over 2,600 items in all. For more information on the Mickey Mouse model sheet, click here. For more information on the auction and the items for bid therein, visit Hake’s website. The auction closes March 24-26.