Weird Tales of the Macabre 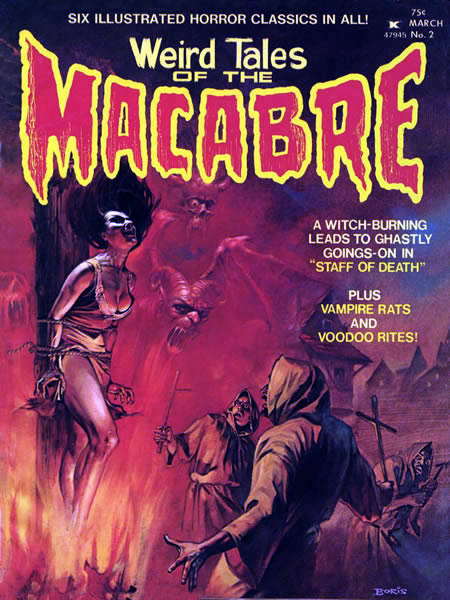 Weird Tales of the Macabre was a horror anthology published by Seaboard Periodicals for its Atlas line of comics and magazines. A contemporary of Creepy and Eerie, both then published by Warren, it was edited by former Warren editor Jeff Rovin.

The second issue (cover dated March 1975) showcased the work of Boris Vallejo on the cover and tied into the Atlas color comics with a Bog Beast story by Gabe Levy and Badia Romero. Also in the issue were contributions by Al Moniz, Xirinius, Pat Boyette, George Kashdan, John Severin, and Leo Summers, and the article “The Films of Edgar Allen Poe” by Karl Macek,

Unlike Creepy, Eerie or the Atlas title Devilina, there was no host or recurring character in the short-lived, two-issue series. There was nothing particularly groundbreaking about the title, though in addition to the covers there are some standout stories in the pages, and they’re certainly worth checking out for period horror fans and those collecting the Atlas line.