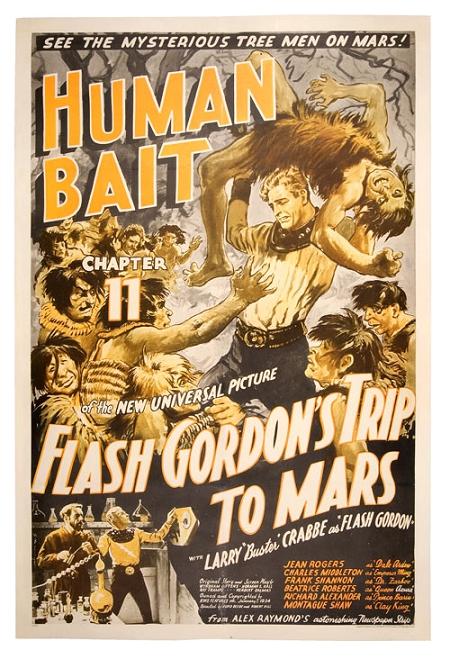 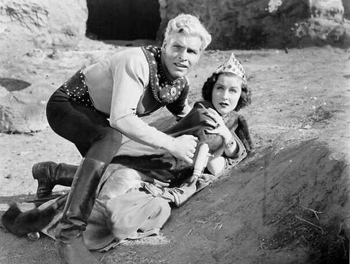 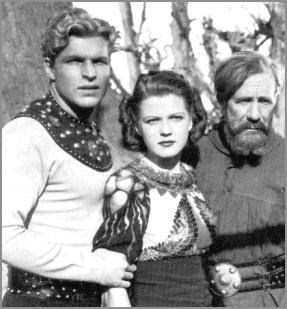 Any type of series makes changes as it progresses. Catering to audience desires, annoying characters disappear, boring storylines are dropped, and controversial material is refined. This process has been a part of the film and television industry since the days of science-fiction hero Flash Gordon.

Made in 1938, Flash Gordon’s Trip to Mars was a 15-episode serial, based on the comic strip by Alex Raymond. The story begins when a mysterious beam of light disrupts and begins to destroy Earth’s atmosphere. Flash Gordon, Dr. Zarkov, Dale Arden, and wisecracking reporter Happy Hapgood, take Zarkov’s rocketship and venture into space expecting the disturbance to originate from the planet Mongo, the setting of Flash’s first space battle. After leaving Earth’s atmosphere, they see that the ray is coming from our next door neighbor, Mars. Though the problem is not on Mongo, their old enemy from the planet, Ming the Merciless is behind the evil plot, along with Azura, the witch queen of Mars.

Now Flash and company must deal with an old nemesis, and a new one with just as much evil motivation. Using her powers, Azura has mutated people into living clay. Thankfully, the king of the clay people knows how to destroy the queen, but doesn’t have the means to do it. Initially they mistrust Flash and his crew, but eventually come together as a team. As a united front, the Earthlings and the clay people must fight against Azura’s magic and Martain space-force, Ming’s super-scientific weaponry, the forest people, and all the other problems Mars has to offer.

Though it is a sequel to the 1936 serial, Flash Gordon’s Trip to Mars was quite different. In the original Flash serial, more mature content was included, and was often blatant. Within the story, sexual tension and triangles were prevalent. Dale Arden and Princess Aura of the planet Mongo both vied for Flash’s attention beginning with both women’s opposite portrayal of femininity. Dale was depicted as the fragile dependent type while Aura was domineering and sly, both fought to win Flash. Meanwhile, Ming the Merciless of Mongo lusted, quite openly, over Dale trying to sway her away from Flash.

Outside of the storyline, costumes and make-up were more risqué in the first serial. The women were scantily clad, showing enough skin to make a young man blush, and every opportunity to expose Flash’s muscles was utilized. This and the appearance of hawkmen that resembled angels made religious and conservative groups very unhappy.

Critiquing was similar over the comic strip down by Alex Raymond.  Prior to filming Flash Gordon’s Trip to Mars, he toned down the content and artwork in his strip, consequently changing the serials. Instead of sexual overtones the sequel added a wise-cracking journalist replacing the mature content with comic relief.

Opinions on whether the change is a good thing remain strong on both sides of the fence. Some believe the story was changed too much with the transition into a more family-friendly genre, while others feel the differences have enhanced the story making it more amusing and kid-friendly. Decide what you think by watching the 1930s classic Flash Gordon’s Trip to Mars.