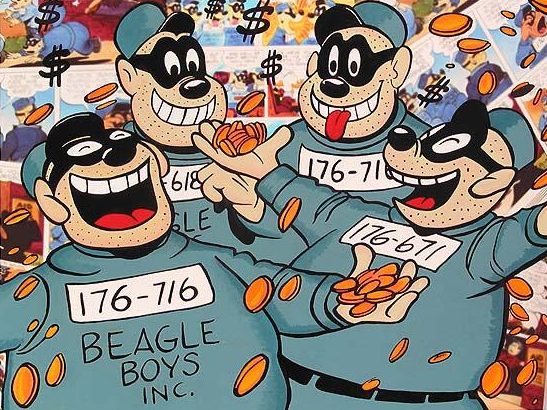 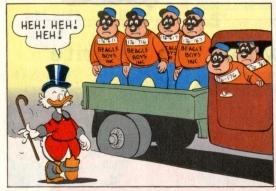 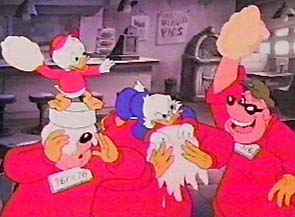 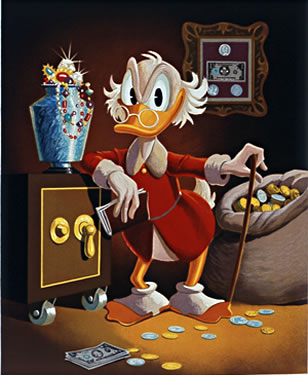 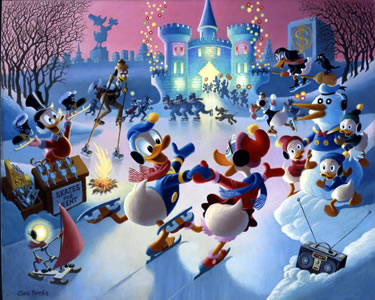 While Scrooge McDuck enjoyed his money pit – well, loved his money pit – it gave him a thorn in his side, over a dozen actually. Scrooge could dive in his money pit and swim through the shining coins, but a band of baddies was across town plotting how to infiltrate that pit and do a little swimming of their own.

The thuggish dogs known as the Beagle Boys, led by their mother, and created by Carl Barks, were loosely based on Ma Barker and the Barker-Karpis Gang. Kate “Ma” Barker lived in the late 1800s-early 1900s. The woman known as a legendary alleged criminal married George Barker in 1892 then couple had four sons. Following the birth of their last son, George left the family leaving Ma Barker to raise and provide for the boys. Due to her long working hours they were often unsupervised leading to mischievous behavior. Though her children were definitely criminals, having committed many robberies and kidnappings as part of the Barker-Karpis Gang from 1931 to 1935 the image of Ma Barker as the gang leader is a myth. She did, however help them before and after their crimes making her nothing more than an accomplice. Ma Beagle was very much a part of the action.

The Beagle Boys in the world of Scrooge McDuck were not interested in milkbones, but cold hard cash. Beginning with their first appearance in Walt Disney’s Comics and Stories #134, they constantly tried to rob Scrooge McDuck. Always after his money, the bumbling beagles consistently fell short of reaching their goal. They embodied the caricature of criminals referred to only by their prison numbers rather than names and they lived in a rundown hide-out in Duckburg. The large family of doggy do-baders included the central boys, and ma of course, as well as nieces, nephews, cousins, and grandparents that go by the names the Beagle Brats, the Beagle Babes, and Blackheart Beagle. When they were in DuckTales the Beagle Boys were given names, such as central figures Bigtime, Burger, Babyface, and Bebop.

Scrooge first met the Beagle Boys during his Mississippi riverboat days, including Blackheart Beagle and his three sons. A crucial point in Scrooge history, he met the modern family during Christmas of 1947, the same time he met his grandnephews Huey, Dewey, and Louie. While Scrooge tried to get along with his family, the Beagle Boys occasionally teamed up with other villains, such as Black Pete and Magica De Spell always after the rich duck’s money.