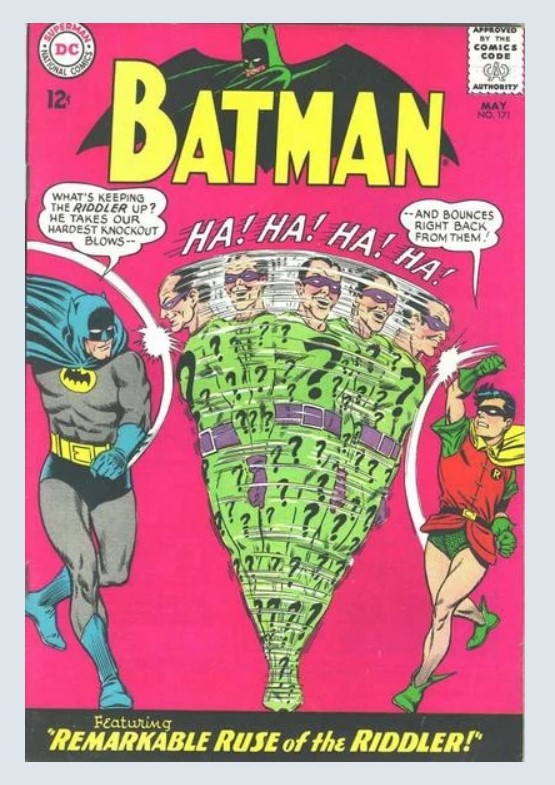 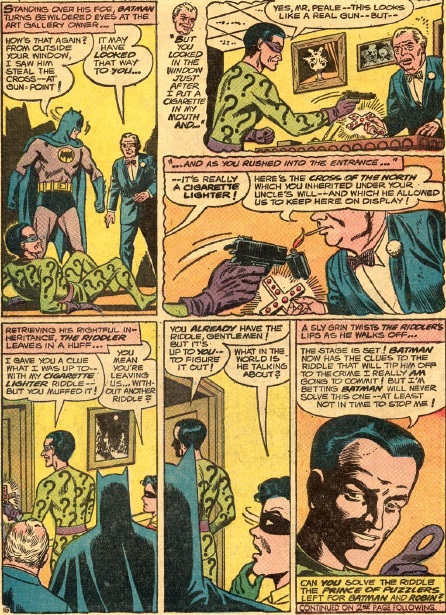 Riddler’s obsession with solving puzzles is what defines his criminal career as he habitually leaves puzzles and riddles as his calling card. What sometimes appear as innocuous brainteasers have clues nestled within to taunt Batman and the Gotham police. On the occasion that he does best Batman, it usually involves putting the Caped Crusader in complicated death traps to further test him. As a fan of magicians, the traps Riddler lays for Batman typically have an abundance of flair and accoutrements, which provide Batman with the loopholes to escape.

The Prince of Puzzles was given his first Silver Age appearance in Batman #171 (May 1965). It starts when he’s been released from prison where he came up with an ingenious new way to commit crime. But, before putting his plan into action, Riddler discovers that Batman is chasing the Mole-Hill Gang. Because Riddler wants the Caped Crusader’s attention, he tells Batman and Robin that he’s now reformed and wants to help find the gang.

Once the gang is caught, Batman and Robin start receiving riddles and the Dynamic Duo assume that Riddler is up to his old tricks. The comic takes a humorous turn, however, because each of the riddles lead them to find Riddler conducting legal business. He does this in the hopes of discrediting Batman, who then tries to put the clues together to discern Riddler’s real plan.

With his next plan in motion, Riddler robs the safe of the Ox Club, but Batman and Robin have uncovered his game and stop him. However, before they can take him into custody, Riddler activates a mechanism that basically turns him into a roly poly toy. Batman studies the weird, albeit funny, predicament and figures out how to shut off the device, taking Riddler back to prison.

Learn more about the Riddler and Batman’s other popular villains in The Overstreet Price Guide to Batman, available on gemstonepub.com.