Not Your Average G.I. Joe

Though not your average G.I. Joe manufactured by Hasbro, this wind up toy is a Joe none the less. This particular windup toy was around much longer than the popular dolls dressed in United States Army camouflage uniforms and lining the shelves of Toys 'R Us.

The origin of the term “G.I. Joe” actually dates back to WWII, where it became one and the same with the ordinary American foot soldier. G.I.’s in World War II were considered the everyday “Joes.” The term refers to the farmers who were requested to serve their country in a time of violent battles, the wise cracking kid from Brooklyn who gave up the safety of home to climb up a bullet ridden hill on a Pacific Island or the factory worker from Pittsburgh, planted knee deep in sand, dodging enemy fire on Omaha Beach.

The term G.I. continues to refuel proud feelings of honor, nobility, patriotism and memories of a war that was depicted as a fierce battle between good and evil; the axis of power versus the G.I. Joes. Thankfully, the Joes triumphed.

About 10 years before Hasbro invented the G.I. Joe doll; there was the tin wind-up toy of “G.I. Joe and his Jouncing Jeep.” Manufactured by Unique Art Mfg. Co. sometime in the 1950s, this toy is certainly a fantastic addition for any G.I. Joe or WWII collector. 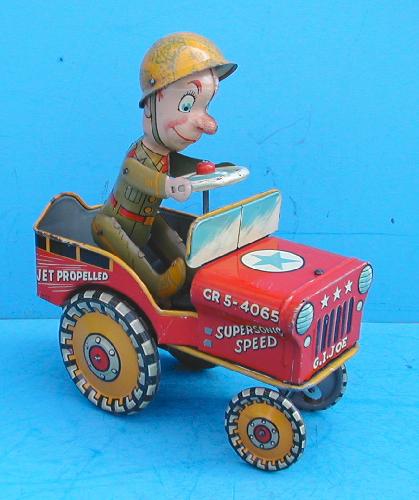 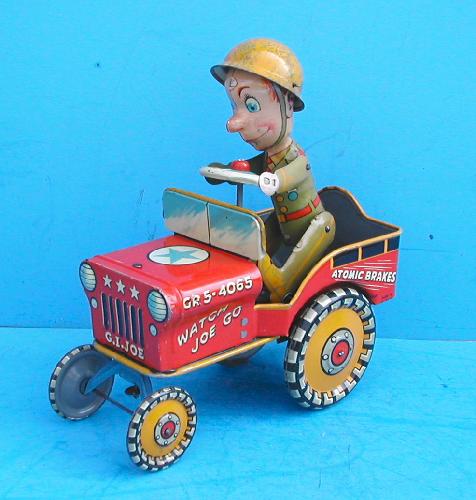 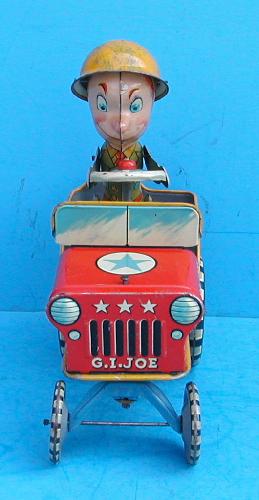