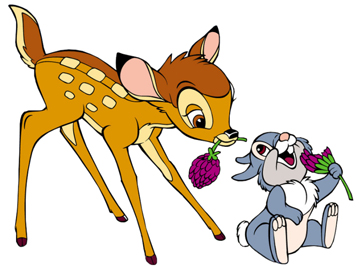 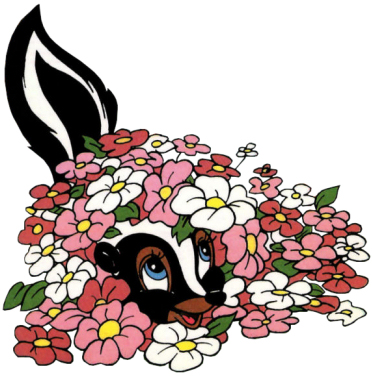 All too often, title characters get all the glory in a movie, and the supporting characters are forgotten. Bambi, the young deer whose mother is shot by a hunter in the Disney animated feature film of the same name, certainly deserves the sympathy and compassion of movie goers. But where would Bambi be without his loyal forest friends?

After Bambi lost his mother and was all alone in the world, Thumper the rabbit and Flower the skunk were there for him. Named for his habit of thumping his right hind foot, Thumper was the one who taught Bambi how to talk. One of the first words he learned was “Flower,” and through a bit of confusion, the skunk gained the nickname.

During the winter, Thumper also attempted to teach Bambi how to ice skate. You probably recall the images of Bambi awkwardly becoming accustomed to walking on all four of his gangly legs, so you can imagine how disastrous ice skating turned out.

Come springtime, Thumper and Flower warn Bambi about “twitterpation,” or falling in love. Thumper says that in the springtime, everyone gets “twitterpated,” but vows that he will never fall in love, and the others agree that they would never want to either. But at the end of the movie, Thumper returns to the screen with his family in tow, and they all seem to have inherited his thumping foot!

Some of the most adorable, tender and comedic moments of this Disney classic can be attributed to its sidekick stars. Thumper went on to star in Bambi II, and is still a well-known character.