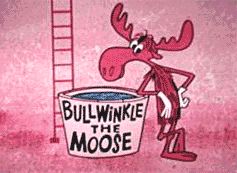 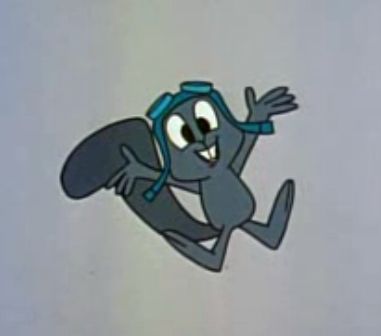 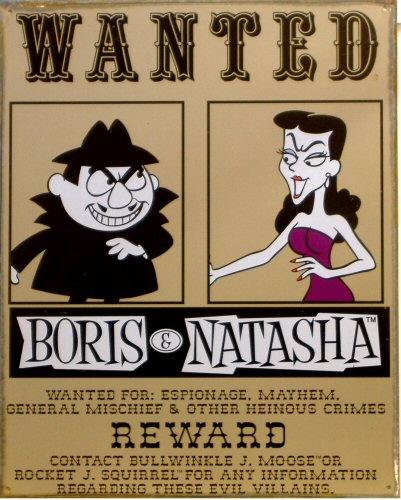 The famous coat rack, Bullwinkle J. Moose, made his 1959 celebrated debut in Rocky and His Friends. After initially being created for The Frostbite Falls Review, a series which never developed, creator Jay Ward made the wise decision to utilize the dim-witted moose as a friend of Rocky’s. Receiving his name from a funny car dealer, Clarence Bullwinkel, Ward knew the moose was going to be an instant success!

Taking place in Frostbite Falls, Minnesota, Rocky and His Friends was focused on the town hero: Rocky! Wanting to meet the hero, Bullwinkle introduced himself and they became inseparable friends. The show revolved around the duo always escaping the evil plans of Pottsylvanian spies, Boris Badenov and Natasha Fatale. The Pottsylvanian spies, whom closely resembled Gomez and Morticia Addams with a Russian accent, made numerous attempts to capture ‘moose and squirrel,’ but in the end, the no-gootniks always failed their corrupt dictator, Fearless Leader.

After Rocky and His Friends aired on ABC, the show made the switch to NBC in 1961. In order to receive even higher ratings, NBC retitled the series The Bullwinkle Show due to Bullwinkle’s everlasting popularity. Then, in 1964 the series returned to ABC, only to be canceled shortly after. Although, due to a strong following, Bullwinkle and Rocky were able to live on through reruns until 1973, when the series went into syndication.

While Bullwinkle was portrayed and mostly remembered as dense, he also had his intellectual moments, such as receiving an Honorary Mooster’s degree from Wossamoota U. and graduating from M.I.T. (Moose Institute of Toe-dancing). During the “Mr. Know-It-All” portion of the show, Bullwinkle demonstrated how to accomplish tasks, such as changing a flat tire. His solution to changing a flat tire, when your spare is flat as well? Become a pedestrian. Another popular element was “Bullwinkle’s Corner,” where Bullwinkle’s tagline, “Hey Rocky, watch me pull a rabbit out of my hat” was created. During this skit Bullwinkle would always mess up his task and it would conclude with Rocky stating, “and now, here’s something we hope you’ll really like!”

Today, Bullwinkle and Rocky can be found towering over Sunset Boulevard. A 30 foot statue of the moose and squirrel was constructed outside of Jay Ward Production offices. Residing there since September 24, 1961, the duo was unveiled at a kick-off party for The Bullwinkle Show joining NBC.