Mud is Thicker Than Water 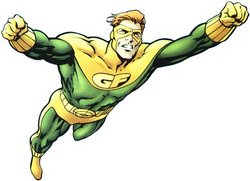 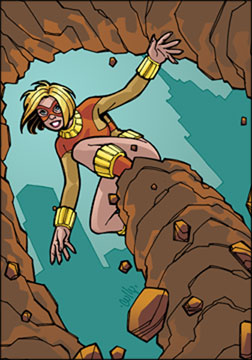 The saga of Geo Force and Terra, his half-sister, begins in Markovia. Geo Force’s alias is Brion Markov, Prince of Markovia. Created by Mike W. Barr and Jim Aparo, the hero first appeared in The Brave and the Bold #200 (July 1983). When Baron Bedlam kills Brion’s father, the King of Markovia, and tries to mount an insurrection, Geo Force joins with other heroes to form The Outsiders, a group that consists of himself, Metamorpho, Black Lightning, Katana, Halo, and is led by Batman.

Although he is not as high profile as some other DC heroes, Geo Force possesses some pretty impressive powers. For example, he is able to manipulate gravity in order to make things heavier or lighter, he can produce blasts of lava at will; and sometimes, he uses a combination of the blast and his control over gravity to fly at extreme speeds, albeit for fairly short distances. And of course, he has the requisite superhuman strength and durability. His powers are derived from a combination of things: a special device developed by Dr. Helga Jace that she used on Brion, and his family heritage both play a part. Only members of the royal family can hold the powers permanently, though the device could be used on non-royals for temporary power. But ultimately, Geo Force’s power comes from the Earth itself. Some say that during his first adventure, Geo Force was killed and buried by soldiers, where the Earth healed his wounds and restored his powers. He remains strongest with two feet planted firmly on the ground. If he is away from the earth for too long, his powers begin to diminish.

Terra is Geo Force’s half sister. Otherwise known as Tara Markov, she is the illegitimate daughter of the King of Markovia and an American woman, whose identity is unknown. New Teen Titans Vol. 1 #26 introduced the character created by Marv Wolfman and George Perez in December 1982. Terra possesses the ability to manipulate all kinds of earthen matter. Her powers probably come from the royal blood from her father, and she was involved in some of Dr. Jace’s experiments. She is a member of the Teen Titans but she secretly served as a spy for Deathstroke the Terminator, one of the Titans’ biggest enemies. This storyline is known as “The Judas Contract,” because the Titans are betrayed by one of their own, which at the time was considered very shocking, and is still considered a defining moment in comics history. At one point Terra even kidnaps the Titans and locks them in the H.I.V.E. Complex. Using her own powers to pull down the building, she accidentally kills herself in an attempt to destroy Deathstroke, whom she believed had betrayed her. Terra’s demise wasn’t final, however, as she returned to comics during The New 52.