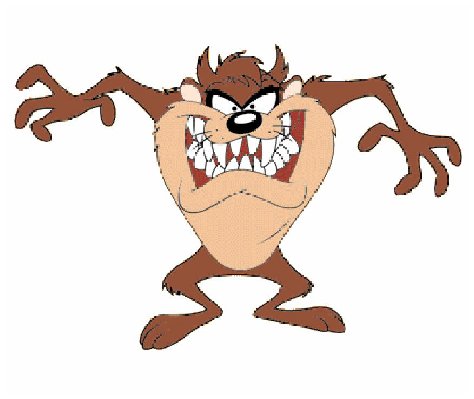 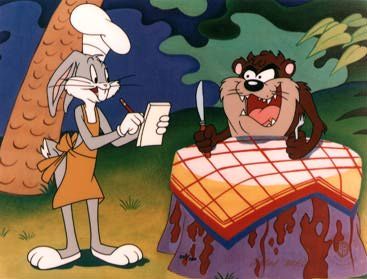 A Looney Tunes favorite, the Tasmanian Devil, Taz for short, is noted for his powerful jaw and his ravenous appetite, which he indulges by eating lions, tigers, elephants, buffalos, donkeys, giraffe, octopuses, rhinoceros, and moose. Oh, he also loves chicken and duck but his favorite thing to eat is rabbit.

In fact, did you know that’s how our beloved Taz made his debut as part of the Looney Tunes gang? That’s right, he tried to eat the crafty and clever Bugs Bunny. Released in June of 1954, in the cartoon short, Devil May Hare, Taz stalks Bugs but due to his dim wits and incapacity to form complete thoughts, let alone sentences, he turns out to be nothing more than a nuisance and Bugs eventually gets rid of him by matching him up with a fake female devil. If there’s one thing other than food to detour a male Tasmanian Devil, it’s a pretty female devil.

But for the most part, Taz usually has only one thing on his mind: eating. When his stomach growls, Taz whirls around like a tornado and slices through the forest like a chainsaw. When in this furious mindset, giraffes scamper for their lives and alligators turn themselves into luggage to hide. One thing is for sure, never underestimate a Taz, they can surprise you.