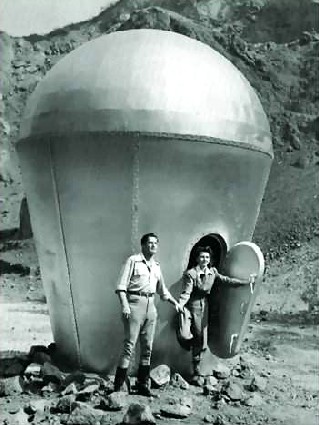 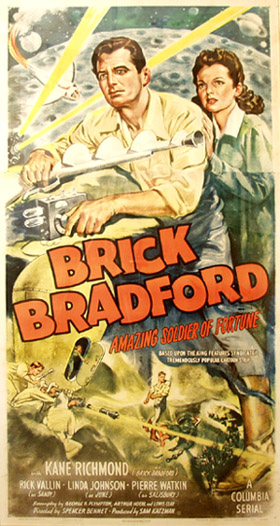 In the grand tradition of time and space travelers, Brick Bradford emerged in 1933 to forge a path for good in galaxies far away. Originally distributed by Central Press Associate, a small subsidiary of King Features, Brick's beginnings were humble and his exploits only appeared in small town papers.

But writer William Ritt and artist Clarence Gray were undaunted by the patchiness of regional readership and continued producing their colorful, intelligent daily strip for a steady sci-fi fan base.

Their commitment to intelligent storylines involving robots, dinosaurs, seedy intergalactic villains and voyages to subatomic worlds quickly caught on with audiences in a little over a year. Weekend editions were added, and by 1935, Brick's adventures began to pop up in the Sunday pages of larger papers. Ritt moved Brick's plots along at an astoundingly rapid pace, further adding to the strips widespread appeal.

In 1937, Brick managed to happen upon a time machine called The Time Top. While the device had been previously featured in its own short-lived 1935 Sunday feature, its inclusion in the Brick Bradford series proved to be its real saving grace. The Time Top remained a staple in Brick's Sunday strip for years.

Reprints of Brick Bradford appeared in the first issue of King Comics in April 1936. Ace Comics reprinted the series from 1947-1949. During that time, Brick starred in his own title, issued through Standard Comics, but the venture only lasted a few months. In 1960, King Comics published the first and only original (as in non-reprinted) Brick Bradford stories in the back pages of The Phantom and Mandrake the Magician.

The Brick Bradford franchise expanded to Big Little Books and a 12-chapter Columbia Pictures serial during its run.