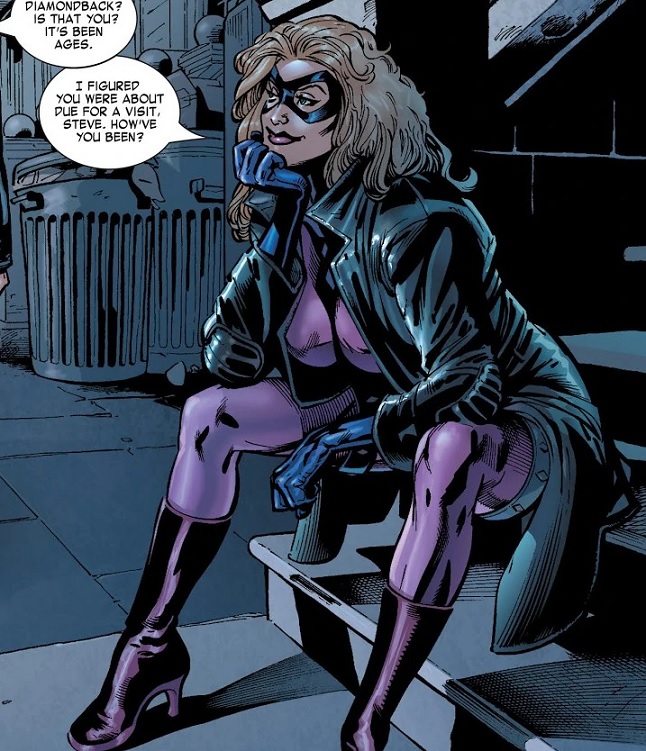 Rachel Leighton, aka Diamondback, was originally a villain who was part of the Serpent Society. Mark Gruenwald and Paul Neary introduced her in Captain America #310 (October 1985) as an Austin, Texas native who worked at a boutique before she became a mercenary.

Her brother introduced her to the criminal Trapster who provided her with weapons. Anaconda trained her at Taskmaster’s academy where she honed her skills in hand to hand combat. In addition to her fighting ability, she threw acid laced and poison tipped diamonds, earning her the nickname Diamondback.

The first time she met Captain America, she developed a crush on the superhero. She had been tasked with capturing him for the Porcupine, but was distracted and failed her mission. The pair would eventually date when Diamondback was on less of a supervillain path.

Turmoil in the Serpent Society led Viper to plan a takeover of the criminal enterprise. She set up some of her followers as new members until there was enough to overthrow the group and oust the current leader, Sidewinder. Diamondback and Sidewinder were able to escape Viper and her team by seeking help from Captain America’s allies. The battle ended with Viper’s defeat, though Sidewinder left anyways. Diamondback stayed in the Serpent Society under the new leader, Cobra.