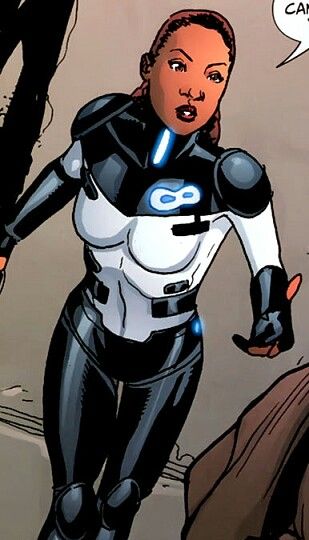 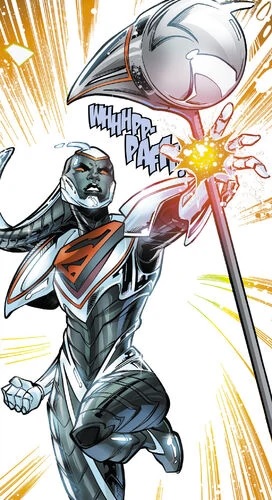 Natasha Irons is the fifth superhero to use the name Steel, following in the footsteps of her uncle, John Henry Irons. Natasha was introduced in her teens and, like the rest of the family, knew John Henry’s superhero identity as Steel.

A creation of Louise Simonson and Chris Batista, she debuted in Steel Vol. 2 #1 (February 1994). Natasha was soon kidnapped by Hazard and saved by Steel, then she briefly fought by her uncle’s side by using the drug Tar.

When Entropy Aegis trapped John, Natasha designed her own suit of armor using Aegis’ power. She teleported to Apokolips and fought Doomsday alongside Superman, Supergirl, and Superboy. Suffering from injuries, John passed the mantle of Steel to Natasha, designing a more advanced suit of armor for her. When Superman was hurt by a ghostly ninja, Natasha tried out her new armor and saved Superman by firing an electric pulse to restart his heart.

In the weekly 52 series, Natasha had a falling out with her uncle in part because she wanted to join the Teen Titans while he expected her to help clear out debris from a battle in Metropolis. Furious with her for going against him, John dismantled her armor.

After a terrible fight with her uncle, Natasha became one of the first test subjects for Lex Luthor’s Everyman Project. John confronted Lex, so Natasha, along with other newly superpowered people, attacked him. They became even more estranged after that.

With her new abilities to create solid light constructs, Natasha was dubbed Starlight. Things quickly turned deadly during the “Rain of the Supermen” storyline when Lex deactivated the Everymen who weren’t in Infinity, Inc., which caused some of their deaths. Natasha realized that her uncle had been right about the dangers of working with Lex. She became a double agent to stop Lex, but he found out and beat her using his new superpowers.

Steel and the Teen Titans attacked LexCorp and rescued Natasha, who had already been stripped of her Starlight powers by Lex. John created a new suit for her, they restored Steelworks, and together they stopped Lex.