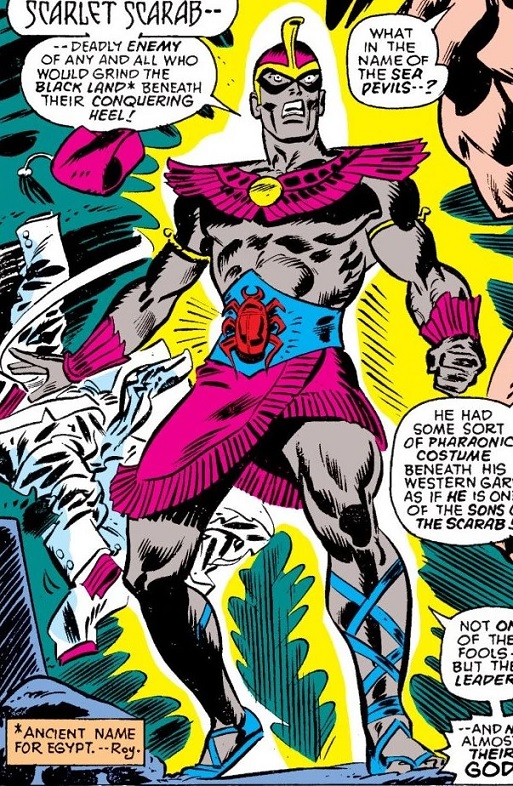 In the season finale of Moon Knight, Arthur Harrow successfully freed Ammit and became her avatar. Ammit and Harrow’s forces outpowered Moon Knight and Khonshu, but the playing field was made slightly more even when Layla El-Faouly became the avatar of hippo-headed goddess Tawaret, as the Scarlet Scarab.

The original Scarlet Scarab was Professor Abdul Faoul, a man imbued with powers to protect Egypt. Once he took possession of the scarab, he became extremely strong, could fly at high speeds, fire bursts of mystical energy, create a protective aura, and use the scarab to siphon power from others.

The Scarlet Scarab was created by Roy Thomas, Frank Robbins, and Frank Springer for Invaders #23 (September 1977). As the leader of the Sons of the Scarab, Abdul sought to protect his country from foreign powers during World War II.

The Invaders headed to Egypt to help British forces when German forces were sent to the area. Abdul saw them as more invaders and convinced Namor and the Human Torch into a pyramid where he used the scarab to fight them as the Scarlet Scarab.

But, once he saw that the Nazis were attacking the Egyptians and had no plans to help them push back against British rule, he started to help the Invaders. They allied during the fight, however, Scarlet Scarab was strongly opposed to a foreign power being involved in his country.

He continued protecting Egypt until his death when he passed on the knowledge of the Scarab to his son, Mehemet.