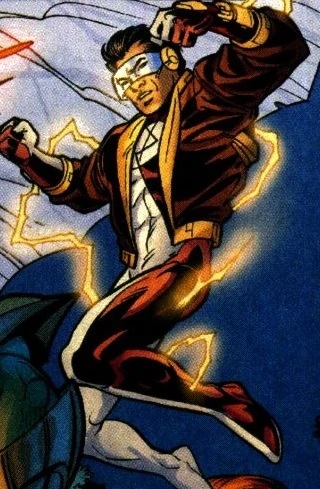 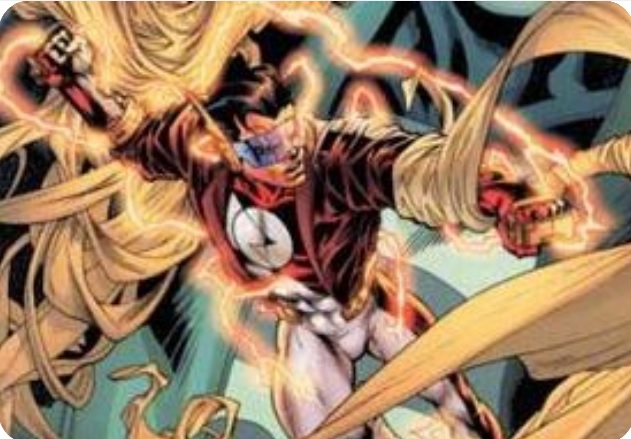 Danny Tsang, aka Striker Z, is a DC hero who was introduced in JLA #61 (February 2002) by Kurt Busiek and Tom Grummett. He is a human bio-energy battery who funnels his power into gadgets like a dazzle strobe that emits blasts of light, a jacket outfitted with tiny jets for flight, a cannon that concentrates his energy in one blast, a blade made of light, and a device that sends out sound waves.

Danny was a stuntman working for Fragrant Harbor Films on the movie, Unclean Policeman IV. They were filming in Hong Kong where director Dickson Kurata snuck the cast and crew into a STAR Labs facility to film. While performing a complicated stunt over a container of experimental fuel cell plasma, Danny’s body was changed by the exposure, turning him into a human bio-energy battery.

His best friend Charlie Lau, a former STAR Labs scientist, created a suit for Danny with protective measures like the flight jacket and Striker plates. On his first superhero outing as Striker Z, Danny helped Superboy stop his former director, Dickson, who had also been transformed by the fuel cell plasma and was going by the name Golden Sorcerer. Dickson had a greater supply of energy than Striker Z did and was able to create solid energy constructs. Superboy and Striker Z worked together to defeat Golden Sorcerer by attaching Striker Z’s Omega Cannon to Superboy and using his enhanced energy.

In a later story, Striker Z was found unconscious at a STAR Labs facility when he tried to stop Doctor Impossible. The Guardian informed the Justice League that Striker Z’s pelvis had been broken in the fight and was out of commission.