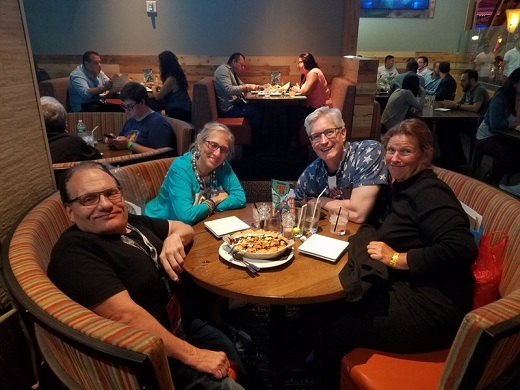 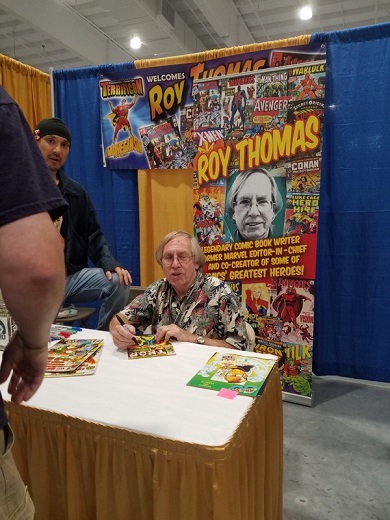 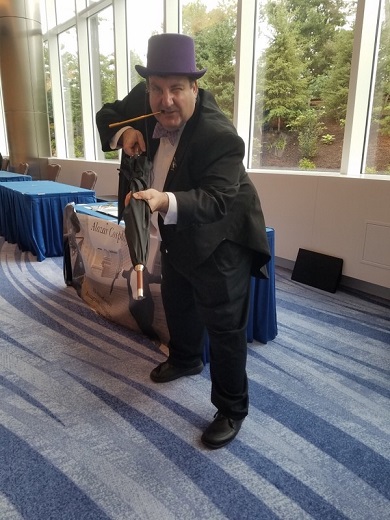 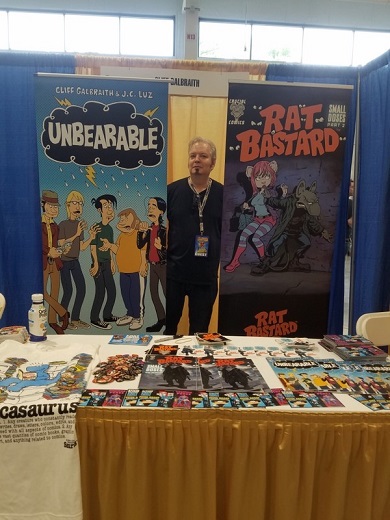 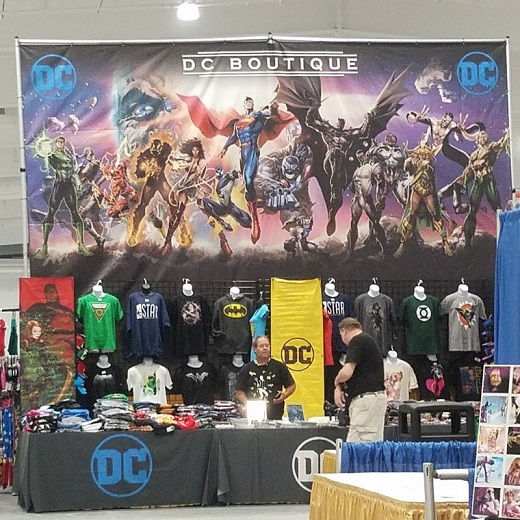 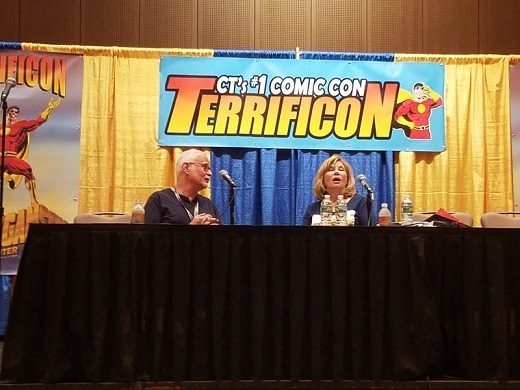 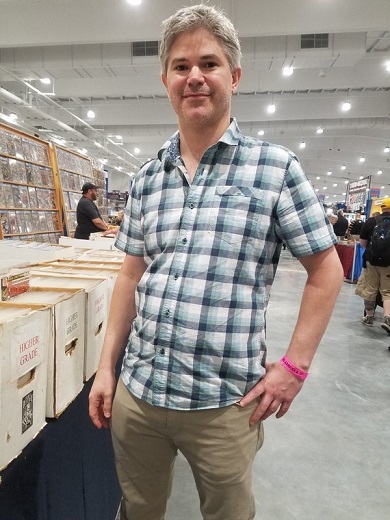 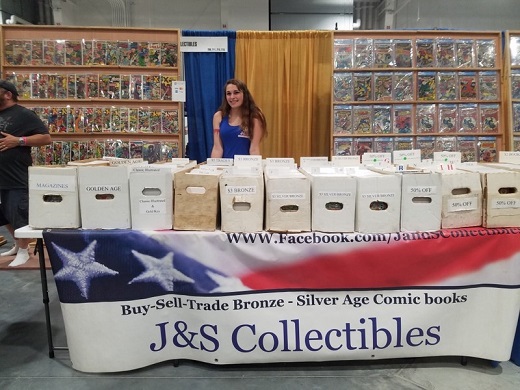 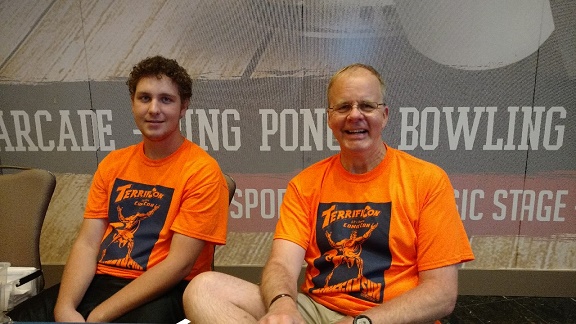 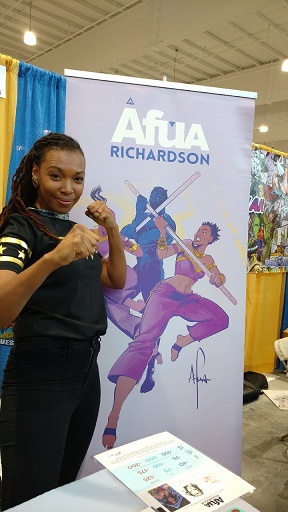 The latest edition of TerrifiCon was held on August 17-19, 2018, at its new, but old home at the Mohegan Sun, Casino and hotel in Uncasville, CT. It’s old in the sense that Mohegan has become the permanent home of the comic con, but its new in that it is now held in the Earth Expo Convention Center at the casino which opened on May 30. It is an enormous room containing over 275,000 square feet of meeting space, which was packed with pop culture from the world of comics, TV, movies, cosplayers and more.

Mohegan Sun is owned by the Mohegan Tribal Gaming Authority and it really does offer world class amenities for its 5.6 million visitors each year (which is the most recent head count I could find). Centrally located along the I-95 north east coast corridor, it is within easy access of New York, Boston, Hartford, and Providence. Those looking to make a vacation beyond the con itself consider that it is located 15 minutes from the museums, antique shops, and waterfront of Mystic Country which is an area Allie and I have explored in the past and intend to go back to soon. The casino is located at 1 Mohegan Sun Boulevard, Uncasville, CT 06382. It offers more than 13,000 on-site guest parking spaces and all that parking is free.

There were many hotel options with the 34 stories tall, 1,200 luxury guest rooms and suites that the Mohegan Sun hotel offers. It was the primary convention hotel, which offered a special convention rate, and it is connected to the casino via a corridor that leads right to the convention center. In addition, there are about 50 places to stay within 20 minutes of the Mohegan Sun, many offering free shuttle buses back and forth to the casino.

As far as food goes, there are many different options and many of the eateries offered show discounts and special offers. Beyond the casino there are many local restaurants a short drive away from the con.

Mitch Hallock owns and operates TerrifiCon. He is very passionate about comics and it shows in everything he does to make his con as fun and entertaining and comic-centric as possible. During the show his intensity is fully on display. He seemed to be anywhere and everywhere at one time and no matter where I was in that convention room, he seemed to show up out of nowhere. I am happy to say all that work really did pay off as he put on one heck of a show.

Panels are a hallmark of the modern convention and there were plenty at TerrificCon. Indeed this show’s line up was one of the best I have seen in a regional con. The panel hosts for this year were Roy Thomas, John Siuntres of the Word Balloon Podcast, Joe Stuber of the Comic Book Central Podcast, Mitch Hallock and John Cimino of Terrificon’s Power Cosmic Podcast, Mike Zapcic of the Mike and Ming Podcast, and writer Paul Kupperberg.

Some, but certainly not all of the amazing panels included DC Comics’ Long Lost Love, as well as Toys and Comics a Look at GI Joe, Micronauts, He-Man and Super Powers. There were several panels for interested Marvel fans, which included The Psychology of Wolverine, Forging the Infinity Gauntlet, A Tour through Marvel’s Cosmic History, What’s New at Marvel Comics, and Marvel Comics The Last 45 Years. Of course, there was a panel devoted to Superman and 80 Years of Superman. There were many more and I really commend Hallock for putting together an outstanding collection of quality panels for attendees to choose from.

There were also panels for cosplay and podcasting. One for cosplayers focused on social media, ways to utilize it, etiquette, and related topics. A panel for podcasters gave them the chance to describe how they got into it and they gave advice for the industry.

There were many highlights at this con. Right in the door, there was a giant birthday card for the 80th anniversary of Superman which fans could sign. TerrifiCon was attempting to set a Guinness World Record for “Most contributions to a greetings card” on a super-sized birthday card that measured 5 feet by 24 feet, featuring art by Jerry Ordway. As I write this, I have not heard what the results were, but given the number of signatures we saw I suspect there is a good chance they will get the record.

Another highlight for Allie and me was getting to meet and hang out with Barbara Friedlander. Barbara is one of the hidden treasures of comic book history who is finally getting her due. She was the first female editor at DC, then National Periodical Publications, to ever work outside their romance comic book line and edit a non-romance comic, Swing with Scooter, which she told me she also co-created.

We also got to talk to Roy Thomas, Batman artist Joe Giella, Cliff Galbraith who runs Crucial Entertainment, Mark Haspel, Bob DeSimone (who dresses and looks like Adam West’s Batman), and Christie Marston (the granddaughter of William Marston creator of Wonder Woman), among others.

There was an excellent variety of comics offered for sale. Walking the aisles, I saw comics ranging from early Golden to Modern Age. I picked up a nice upgrade to an 80-page giant that I had (and still have) as a kid. A surprising amount of comic book art was available for sale and Allie and I did indeed take advantage of that. Clothing, archival supplies, toys, fanzines, and all the items one expects to find at a comic show were there waiting to be bought. Dealers we spoke to were happy with their sales and Allie and I had a ton of fun at this year’s show, spending way too much money, but very happy with the goodies we brought home and we are already thinking ahead to the 2019 show.

TerrificCon will return in 2019 on August 9-11. To keep up with the latest news on the show check out the website.