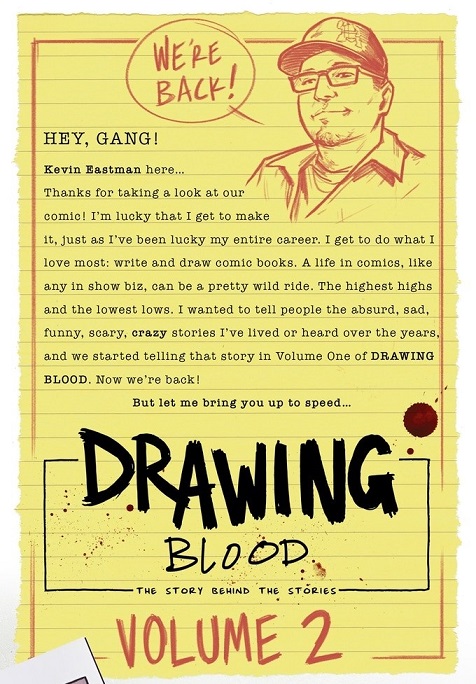 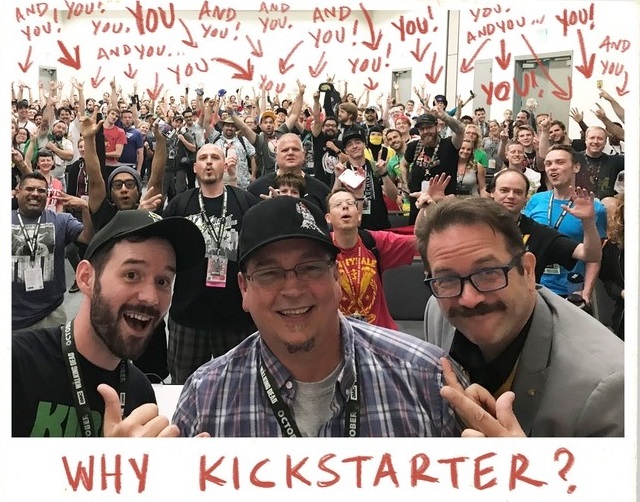 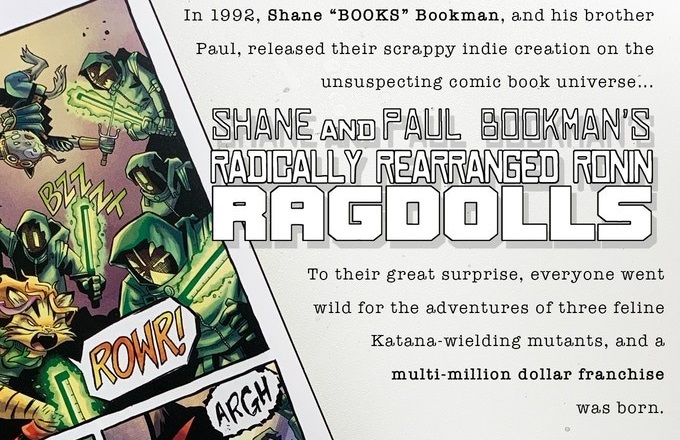 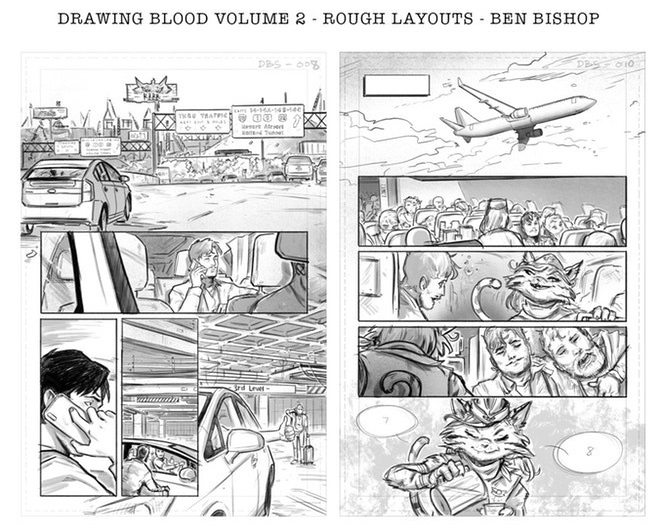 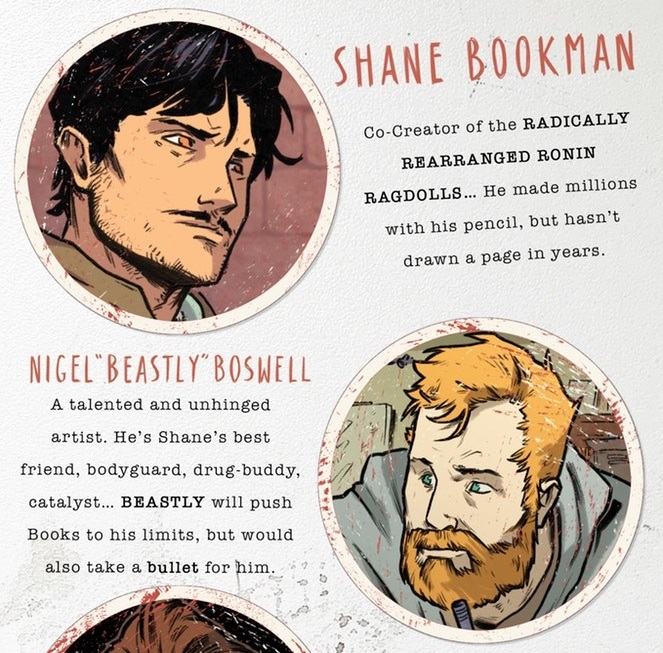 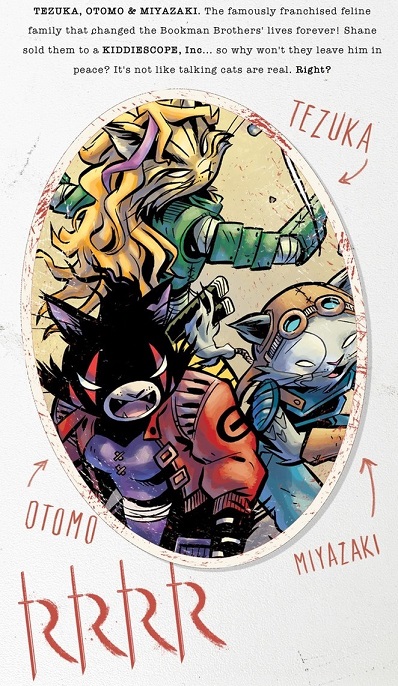 In their semiautobiographical comic series Drawing Blood co-creators Kevin Eastman and David Avallone provide an inside look at the comic industry through the life of fictional creator Shane Bookman. The first volume sees Shane grieving over the loss of his mentor, attempts at producing a stage performance, threats from Lithuanian mobsters, and the fallout when a movie based on his creation (Radically Rearranged Ronin Ragdolls) is dramatically altered from the source material.

The first volume was funded via Kickstarter and recently individual issues have been made available in comic book stores. As the creative team is promoting a new Kickstarter to fund a second volume of Drawing Blood, Avallone took some time to chat with Scoop about the upcoming story and what perks fans can expect when they back the project.

Scoop: When the first volume ended, Shane Bookman had gotten yanked into the back of a nondescript van. Where do we find him at the beginning of volume two?
David Avallone (DA): We find out on the first page where that van was taking him, and whose van it was. It might surprise some readers… it might not. We’ll have to wait and see. But I promise the cliffhanger is resolved immediately. And the Kickstarter supporters will be getting that first chapter the day after the campaign ends.

Scoop: Shane made a big, bold move when he went against Morgan Harbor [the Ragdolls movie director] and said that the girls would be mutants, not aliens. How deeply will you go into the fallout/response of that decision?
DA: This is another issue we deal with pretty immediately. It’s not too much of a spoiler to say the fallout from that rash public statement sets the course for the next four issues. (In other words… Shane is going to Hollywood!)

Scoop: During the comic convention sequences in volume 1 we see the pressure that fans put on creators when they are passionate about a title. Will that be explored more in the next volume?
DA: Once you hit a certain level of success, the fan-pressure is always present in a creator’s life. (Or so I’ve heard… I personally am definitely not there yet.) And a creator would be a fool to complain much about it, as it is a sign of how much your work means to the audience. In the first volume we had a lot of fun with it, and I hope it came off as a mostly affectionate portrait of fandom. That said… the next four chapters (the second volume of the series) are more about Shane’s future and his past colliding, and driving him further to the edge.

Scoop: Now that the Lithuanian mobsters are tied to the Metropolis stage show, will we see them getting involved with the production?
DA: This next arc will definitely include some of that – I love writing the Lithuanians, so they will always pop up. Honestly, though, Metropolis will really dominate the third volume, which is still a ways off at the moment.

Scoop: What else is coming up in the next volume?
DA: As above, Shane goes to Hollywood. Shane sees his ex-wife, Crystal, on the set of her next movie… a movie which creates problems for him. We get to see more of Shane and Beastly’s relationship as they hit the road together, and Shane’s return to his hometown, and more flashbacks to show how he ended up where he is now. It all builds up to a personal crisis that’ll take us to our next cliffhanger.

Scoop: Are you working on more Ragdolls content as well?
DA: Absolutely! Originally, we conceived the Ragdolls origin comic as an in-universe prop… the comic inside the comic, and obviously a pastiche of the Ninja Turtles. But somewhere along the way they took on a beautiful life of their own, and now we can’t get enough of them. For the current Kickstarter, there are two Ragdolls-related projects in the stretch goals.

Scoop: Tell me about the Kickstarter, what are your goals?
DA: Our initial goal is $75,000, just like the first Kickstarter. This covers the costs of creating, printing and distributing a four-chapter trade paperback graphic novel to the Kickstarter supporters. The subtitle of the second volume is “Rough Layouts,” by the way. We got about a third of the way to our goal in the first two days, and we’re holding steady… but you know how Kickstarter campaigns are: between the first two days and the last two days you hit the doldrums a bit, and it takes a lot of will to believe it’s all going to work out in the end. Yet it always does…

Scoop: What are some of the perks?
DA: There’s a lot of signed comics, CGC-slabbed copies of the Ragdolls origin issue, lots of original art, even some amazing Ragdolls fan art. But the real gems are the two stretch goals. The first one – if we pass $75,000 and get to $100,000 – is a new two-part 40-page Ragdolls adventure! Troy [Little] actually pitched Kevin and I on a story in a more “animated” style, as though it’s the tie-in comic for the “Kiddiescope” cartoon series. We loved his pitch, and he came back with a detailed outline which I expanded to full script. He’s working on the art now. It’s fun stuff.

If we get past $100,000 and on to $125,000, we have something really special. The whole time we were developing Drawing Blood and the Ragdolls, Kevin was keeping all his sketches and signing them “in character” as Shane (and sometimes Paul) Bookman. So, we have this amazing sketchbook for the creation of the Ragdolls, with all the stages of design, all drawn by Kevin. Probably over 40 pages of amazing original Kevin Eastman art no one’s ever seen, plus some in-universe notes and scribbles by “Shane Bookman.” We’re very excited to get that out if we’re able to raise $125,000. We think we can do it, but only time will tell!

Scoop: When does the Kickstarter end?
DA: It ends in the morning on August 30. And then we all get to collapse for about an hour… before we have to get back to work on Drawing Blood and the Ragdolls. But that’s no complaint. We’re very lucky to be doing a thing we love, and have the support of fans and readers who want to see what we’re making.