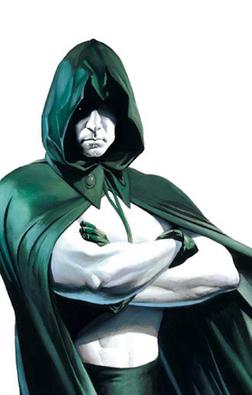 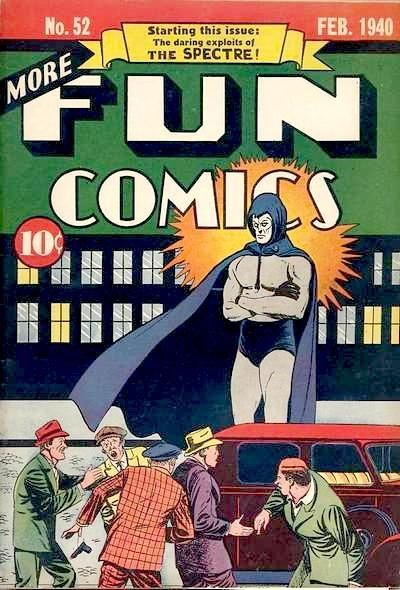 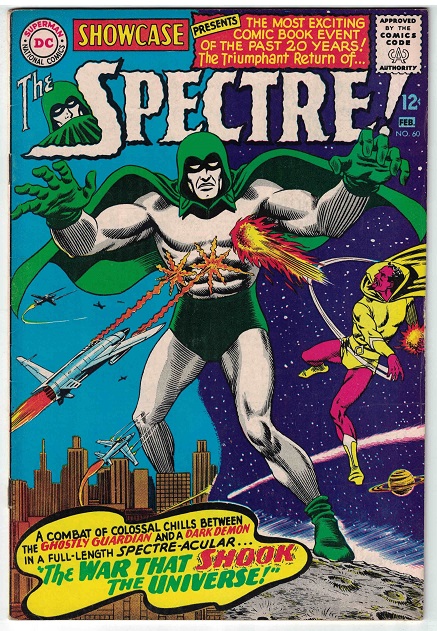 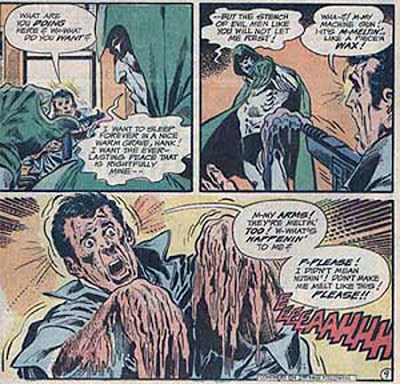 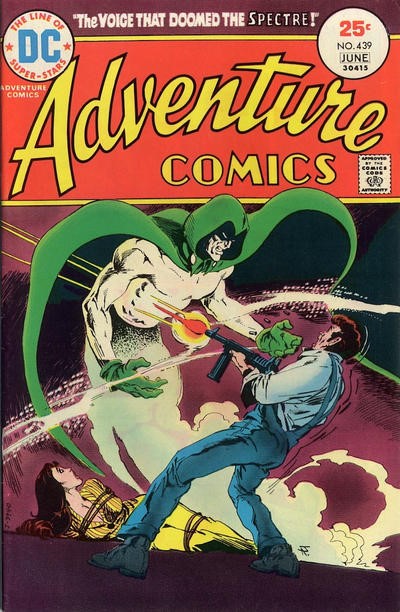 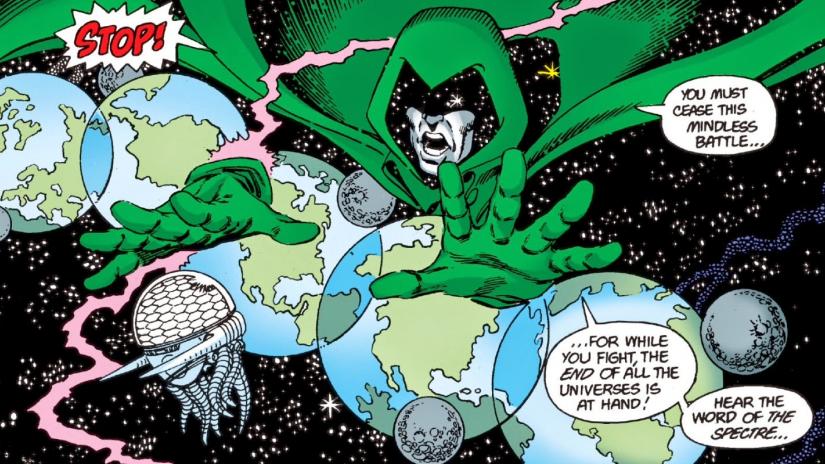 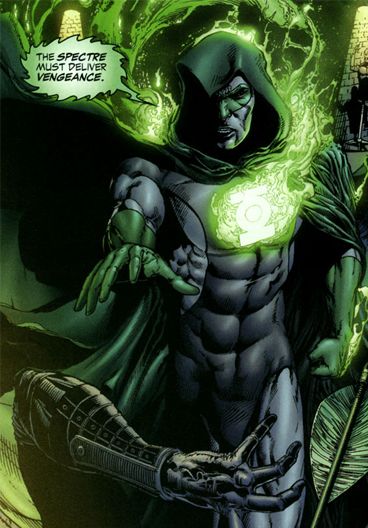 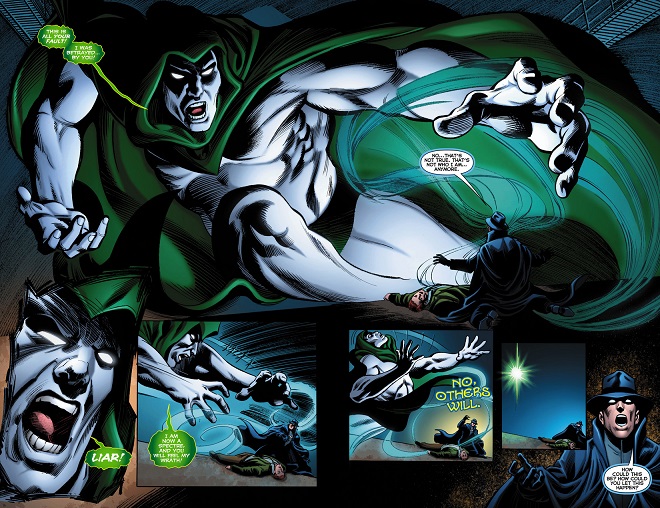 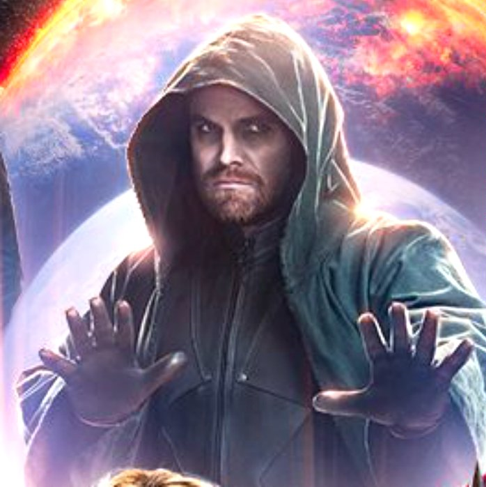 There are comic book characters who are resiliently good or patently evil, and then we have the antiheroes. These characters are mostly good, sometimes bad, and can use methods that would make stalwart heroes cringe all in the name of justice. Spectre, one of the longest-running antiheroes, who has resurfaced time again, has reached his 80th birthday.

Jerry Siegel and Bernard Baily introduced the Spectre in More Fun Comics #52 (February 1940), first as tough cop Jim Corrigan. While he and his fiancée Clarice were on the way to their engagement party, they were attacked and Corrigan was killed. The murderers stuffed him into a barrel filled with cement and then threw it into water. His spirit refused to enter the afterlife and is sent back to Earth by something called the Voice on a mission to stop evil.

The Spectre seeks revenge against the men who killed Corrigan, using his new supernatural abilities. He ends his engagement to Clarice, but continues to live as Jim Corrigan, makes a costume as the Spectre and gains charter membership in the Justice Society of America in All Star Comics.

The Spectre has god-like powers with the ability to manipulate time and space, control matter, he is nearly invulnerable, and almost anything he wishes to do to those he judges is possible. He has no known weakness, though he needs a human host to render judgement, and it is almost impossible to damage him, aside from powerful magic. Spectre is largely considered the most powerful superhero, based on his abilities.

Jim Corrigan gets resurrected in More Fun #75 (January 1942) when the Spectre’s ghostly form can enter or leave Corrigan, therefore functioning independently. There was a period when the Spectre became the guardian angel to the bumbling Percival Popp. When Corrigan enlisted in the military and was shipped out for World War II in More Fun Comics #90 (April 1943), the Spectre took on a permanently invisible form. The title ended with issue 101 (February 1945) and the Spectre made his final appearance with the JSA around the same time in All Star Comics #23 (winter 1944-1945).

DC editor Julius Schwartz revived the Spectre in the Silver Age as the avenging undead spirit, in Showcase #60 (February 1966). Through stories by writer Gardner Fox and artist Murphy Anderson, his powers increased dramatically. After his run in Showcase, Spectre appeared in Justice League of America #46-47 in the team-up story with the JSA and he appeared alongside the Flash in The Brave and the Bold #72 (July 1967).

The Spectre got his own title in December 1967, which ran for 10 issues. The creative team varied on the title, though it is marked by the work of then-newcomer Neal Adams who drew #2-5 and wrote #4-5. Spectre is destroyed during the JLA/JSA event when Doctor Fate creates a massive explosion to destroy an alien device.

He was revived in the ’70s for the anthology series Adventure Comics #431-440 (February 1974-July 1975) in 10 stories by writer Michael Fleisher and artist Jim Aparo. They were more horror-based with some gruesome violence, prompting some fans to voice their discomfort with the new approach in the letters column, so Fleisher introduced Earl Crawford, a reporter who shared their concerns. Three more scripts were written and penciled, but not published at the time. Later in 1988, they were published with a final issue in the four-issue Wrath of the Spectre miniseries.

During this period, he continued appearing in other books, like Ghosts, The Brave and the Bold, DC Comics Presents, All-Star Squadron, and Swamp Thing.

Spectre fought the Anti-Monitor alongside other DC heroes during the 1985 Crisis on Infinite Earths event series. He unites the heroes and villains by warning them about the Anti-Monitor’s plan. When the Anti-Monitor and Lex Luthor attempt to reopen the portal between positive and antimatter universes, the Spectre, who has been magically powered, creates an energy overload that shatters space and time. The Earths merge into a single shared universe and returns the heroes to the present.

In his next solo series by Doug Moench, Corrigan is centered in an occult-focused private detective agency. Spectre was not nearly as powerful as earlier interpretations, even showing the pain caused by merging with Corrigan. That series culminated in 31 issues from 1987 to 1989.

The next series, which began in 1992, was written by John Ostrander who delved into Spectre’s mythos as the Avenging Wrath of the Murdered Dead and a rough cop in the ’30s. Spectre was put into morally gray situations that forced him to address ethical quandaries. One story questioned how a woman who killed her abusive husband should be punished, and in another Spectre threatens to kill all of New York if a wrongfully convicted man is given the death penalty.

This series also added new historical context to Spectre. He was meant to be the Wrath of God and Corrigan was just the latest human spirit used as a guide on Earth. This story also stated that Spectre was the fallen angel Aztar who had been a part of Lucifer’s rebellion, but repented and now his penance is serving as the embodiment of God’s anger.

When Corrigan’s soul is at peace, Hal Jordan assumes the role of the Spectre during the Day of Judgment storyline in ’99. The two bond when Spectre chooses Jordan who wants to atone for almost destroying the universe as Parallax. In the next Spectre series that ran from March 2001 to May 2003, Jordan adjusts Spectre’s mission from vengeance to redemption.

Once Spectre leaves Jordan, he has no human during the 2005 miniseries Day of Vengeance. With no host to help establish appropriate judgement for sins, the Spectre kills anyone from murderers to petty thieves. As Eclipso, Jean Loring convinces Spectre that magic breaks God’s law, and the Spectre destroys all magic constructs, magical dimensions, and related institutions, going so far as to destroy Atlantis. He is eventually forced into a human host to stop his rampage.

During Blackest Night (2009-2010), the Black Hand sends black rings to latch onto Crispus Allen, the current Spectre, and turn him into a Black Lantern. He then seeks to re-bond with Hal Jordan who allows Parallax to possess him to stop the Black Lantern Spectre. Parallax is able to free the real Spectre from the Black Lantern, then Parallax tries to destroy the Spectre, who in turn frees Hal from the fear entity.

In the New 52, Corrigan is a Gotham police officer whose fiancée is kidnapped and he is guided by the Phantom Stranger, based on the Voice’s instructions, who leads him to where she is being kept. But it’s a trap and the pair are killed by the kidnappers and Corrigan is then turned into the Spectre. He returns to work as a Gotham detective, but he is filled with rage and pursues vengeance more than justice as the Spectre. He comes into conflict with the Phantom Stranger and the Voice intervenes to end the fight and set Spectre back on the right path. He eventually joins Gotham’s Detailed Case Task Force to investigate supernatural events.

Outside of comics, Spectre appeared in the Batman: The Brave and the Bold animated show, voiced by Mark Hamill. He has been in several video games, notably in DC Universe Online. In live-action, the character had a cameo on Smallville and appeared on Constantine as Jim Corrigan. A version of Corrigan was in The CW’s recent Arrowverse crossover adaptation “Crisis on Infinite Earths.” He appears in Purgatory and offers the power of Spectre to the newly deceased Oliver Queen. Using the power of Spectre, Oliver defeats the Anti-Monitor and saves the universe.

He hasn’t been prominently featured in comics lately, but in a world rife with villains, the Spirit of Vengeance will always be in demand.