Collecting in the Crosshairs: The James Bond Films 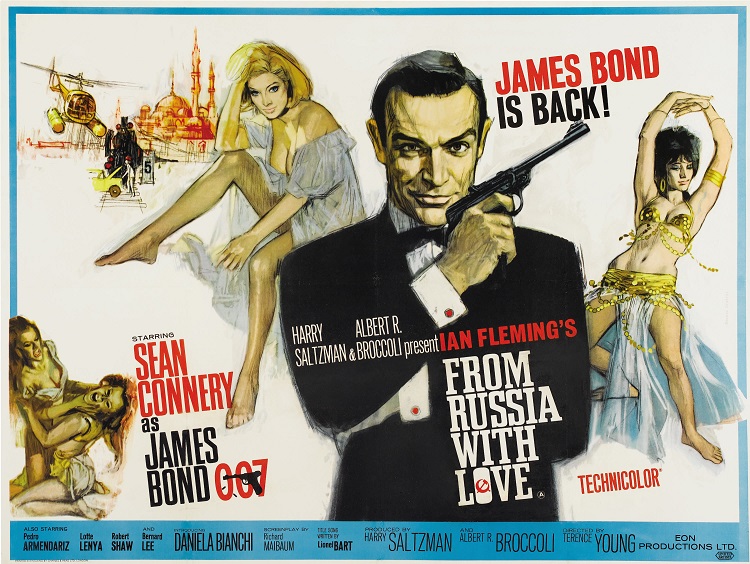 After more than five decades on the silver screen, it’s nearly impossible to imagine a more ubiquitous introduction in cinema, and it didn’t take long after the character’s creation for him to start moving in that direction.

Ian Fleming’s secret agent 007 of Her Majesty’s Secret Service first appeared in hardcover in the novel Casino Royale in 1953 and by 1954 the CBS television network had sensed enough potential to have it adapted as an episode of its anthology series Climax!. That TV version of Bond, which starred Barry Nelson, is just a footnote to those beyond the most serious 007 enthusiasts, and for several years the property didn’t go any further.

But the stage was set.

When producers Albert R. “Cubby” Broccoli and Harry Saltzman cast Sean Connery in the role of Bond for 1962’s Dr. No, they put both the character and the actor on the map. The suave, sophisticated, British secret agent with a duty to queen and country, a passion for women, a wry sense of humor, and a license to kill quickly became an institution for movie-goers. They’ve included superb artwork by the likes of Robert McGinnis and Bob Peak, great photo images such as the lobby card of the Gert Frobe/Sean Connery exchange from Goldfinger (Bond: “Do you expect me to talk? Goldfinger: “No, Mr. Bond, I expect you to die.”), and so much more. They’ve been the subjects of books, including James Bond: 50 Years of Movie Posters, which was released in 2012 along with the film Skyfall.

Given the franchise’s globetrotting, international flavor and long term success, it’s not surprising that there are many distinct and highly collectible variations of posters from countries around the world, but that’s not to downplay the appeal of the U.S. versions, which have often had their own variations. Among the oddities, Casino Royale certainly has to top the list since it has actually had three incarnations. After the CBS television production in 1954, the film rights were held separately from the others. This resulted in the 1967 comedy spoof version which starred David Niven (reportedly Fleming’s original choice to play Bond), Peter Sellers and Woody Allen, among others.

Given the post-World War II, Cold War flavor of the Fleming novel, it was impressive to many Bond fans how much of the book’s tone ended up in the film franchise reboot with Daniel Craig’s debut in the role in 2006.

Also high on the oddity scale in Never Say Never Again, which saw Sean Connery reprise his role as 007 in a remake of Thunderball. This came about because Fleming, prior to the launch of a the film series, had collaborated with producer Kevin McClory and screenwriter Jack Whittingham on a series of plots for a possible Bond TV series. Fleming turned one of those plots into the novel Thunderball, but failed to credit McClory or Whittingham. In a protracted legal battle, McClory won the rights. After a drawn out process, the film was released in 1983.

McGinnis, both with Frank McCarthy and on his own, worked on Thunderball, You Only Live Twice, On Her Majesty’s Secret Service, Diamonds Are Forever, Live and Let Die, The Man with the Golden Gun, and the 1967 comedy version of Casino Royale.

Although the famous image of the “Bond pose” with the gun is correctly attributed to Robert McGinnis from Thunderball, artist Renato Fratini did a brilliant job depicting the attitude that Sean Connery brought to James Bond in his second outing as Ian Fleming's superspy in From Russia with Love. The wide format British quad poster gave Fratini room to highlight not only Bond, but Bond girl Daniela Bianchi and the other women in the film.

For 1965's first U.S. release of Thunderball, some theaters were sent sets of these posters where only the first part was showing, followed the next week by a version with only the first two parts, followed the third week with the full version. There was black printing over the part that the studio didn't want people to see yet. Theaters were supposed to display them in countdown fashion two weeks and one week, respectively, before the movie arrived, and then the full version upon the film’s release. There is a lot of great imagery by Robert McGinnis for Thunderball, and this one-sheet showcases much of it.

One of the truly iconic teaser images from the entire film series is the 1974 U.S. "Christmas teaser" one-sheet from The Man with the Golden Gun, Roger Moore’s second outing as Bond. While the film is set in exotic Asian locations such as Hong Kong, the poster focuses on the film’s most distinctive prop, the Golden Gun itself. The poster depicts the assembly from a pen, cigarette lighter and a cuff link into the deadly tool of the assassin Francisco Scaramanga, who was played by Christopher Lee (who was actually a cousin of Bond creator Ian Fleming).

The first release 1967 U.S. Casino Royale "Spanish/U.S." one-sheet has the famous Robert McGinnis art of the sexy girl with the title on it, as do many other editions from this film, but unlike the regular U.S. one-sheet this poster also has five inset images of Bond girls. The term “Spanish/U.S.” means that it was printed in the U.S. for use in theaters with Spanish-speaking audiences. This version of Casino Royale was a comedy send-up starring David Niven, Peter Sellers, and Woody Allen, among others.