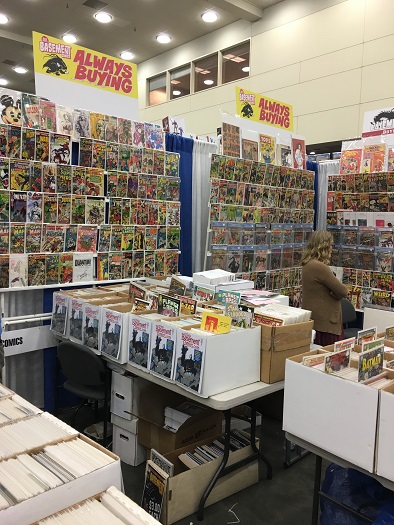 During Baltimore Comic-Con, Scoop stopped by to visit with Al Stoltz of Basement Comics. He talked about the con, the more media-focused conventions, what collectors are looking for, his fanzine, and new website.

Scoop: How has the weekend been so far?
Al Stoltz (AS): Busy. The buying complexion has changed a bit. There are more people looking just for keys and less for everything else. Unless it’s these $3 and $1 books.

Scoop: Are people going after any particular titles or characters?
AS: No, it’s the usual Hulk #181 and New Mutants #98 – all keys. All key driven, all movie driven now.

Scoop: The material that movies trace back to do have quite an impact. As a dealer, do you think we’ll hit a saturation point where people will get tired of the superhero movies?
AS: Like I’ve told people many times, Busby Berkeley thought he was going to do his movies forever, Westerns thought they were going to be forever, and the superheroes will eventually die out.

Scoop: What other shows do you have coming up?
AS: New York Comic Con is my last big show for the year.

Scoop: What do you like about the Baltimore show?
AS: It’s 30 minutes from my house. [laughs] It’s a great show. Marc [Nathan] puts on a good show. It’s mostly comic driven. Only this show and Heroes Con, I consider to be really comic book shows.

Scoop: A lot of shows are more pop culture and media focused now. Do you feel like it’s negatively impacting business or are you seeing new customers who weren’t previously reading comics?
AS: A little bit. We’re starting to get new readers in. What we’re still lacking heavily is female readers, there just aren’t a lot. But I do find when females buy older books in grade, they’re very picky.

Scoop: Have you had any “wow” factor sales this weekend?
AS: Not really, it’s just been a good mix of everything.

Scoop: Tell me about your fanzine.
AS: I wanted to do something old school with comic books last year and this is our 25th anniversary this year. So, we started producing our own fanzine with articles that are all comic-based, sort of throwback to the old Rocket’s Blast.

Scoop: You have a new website too. Can you tell me a bit about that?
AS: Vintagebasementcomics.com – almost 19,000 items, and it’s my passion to have that kind of site available for everybody.

Scoop: Is it just comics or do you have art, magazines, what else is on there?
AS: We have everything, movie-related, we’re gonna have records on there, we’re gonna have Undergrounds, fanzines – you name it, we’ll have it on there.