In the Limelight
FCBD 2020: The Overstreet Guide to Collecting 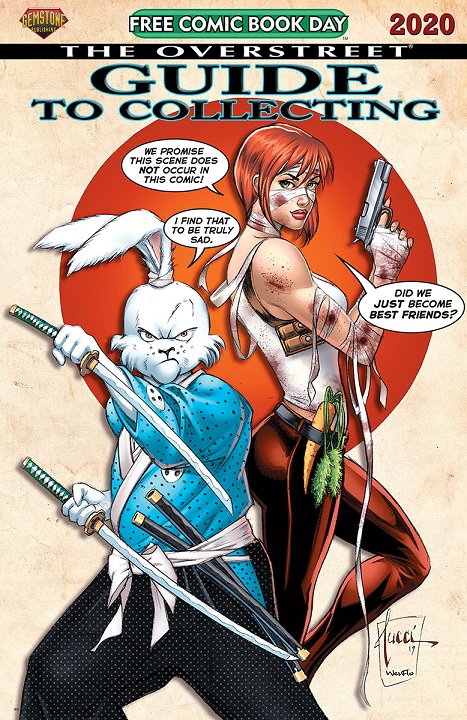 Plans for Free Comic Book Day, the annual comic holiday held on the first Saturday in May, are already in full swing with publishers creating specialty books to celebrate the medium. Gemstone Publishing will offer the newest edition of The Overstreet Guide to Collecting with comic book stories and additional content on the fun of collecting. Gemstone Vice-President of Publishing, J.C. Vaughn has provided some details on the issue, including which comic industry pros participated in its creation.

Scoop: The Painkiller Jane and Usagi Yojimbo team-up on the cover is quite exciting. How did you come up with that pairing?
J.C. Vaughn (JCV): A few years ago, we started doing our current series of crossovers you’ll never see, and this continues that. One of the great things about dealing with creator-owners or small companies is that we don’t have to jump through too many hoops. Most of the publishers we work with on The Overstreet Comic Book Price Guide are great, but they also know there’s going to be a lot more paperwork and approvals to get if we start doing team-ups. That’s not a bad thing; it just makes the creator-owners, who can say “Yes!” in quicker fashion, an easier route to go for something like this. This particular cover started from a conversation I had with Billy Tucci, who illustrated it. I asked who wouldn’t team-up with Painkiller Jane and he mentioned that he always liked Usagi Yojimbo. A few phone calls and emails later, we were in business thanks to permission from Jimmy Palmiotti and Stan Sakai.

Scoop: Some previous issues of The Overstreet Guide to Collecting have had both comic stories and articles. Does that hold true for this one as well?
JCV: It’s mainly comics – there are three stories – but yes, there’s some pretty informative text about caring for your comics in there this time.

Scoop: What can readers expect to find in the stories?
JCV: Since the goal of Free Comic Book Day is outreach to potential new readers (and maybe some lapsed readers as well), two of our stories deal with different aspects of the comic book market in a fun way. We’ve had great reactions to the last few. Additionally, we have a Hero Initiative-themed story by Michael Avon Oeming detailing his and Taki Soma’s real life interaction with Hero.

Scoop: As you mentioned, part of the FCBD mission is to introduce comics to new readers. How will the Overstreet comic appeal to new readers?
JCV: The stories are highly accessible to new readers and we think longtime enthusiasts will enjoy them as well. Comics are an incredible amount of fun. Talking to people about them should be fun, too. Sure, there are now comics that go for millions of dollars, but if we take the fun out of it, then it’s just another hobby. For us it’s a cause, and we do our best to keep the fun in comics.

Scoop: Billy Tucci’s illustrated several of the FCBD covers for Gemstone. How did that come about?
JCV: I’ve been privileged to work with Billy many times over the years, including covers for our Free Comic Book Day issues and for The Overstreet Comic Book Price Guide. In fact, the first cover I ever commissioned was by him. He’s worked with an incredible variety of great colorists, and in this case, I think we can agree that Wes Hartman hit it out of the park as well.

Scoop: Two of the stories are illustrated by Brendon and Brian Fraim. You’ve worked with them a lot. What do they bring to the (art) table?
JCV: The Fraims always bring their “A” game, their best efforts. We’ve collaborated on creator-owned material, a comic strip, and their work for Gemstone for Free Comic Book Day and in the Guide. And since I’m an editor for so many years, it doesn’t hurt at all that Brendon and Brian are deadline hawks. They always deliver.

Scoop: Which other creators were involved?
JCV: This year we get to see the Fraims work with one story colored by Hi-Fi’s incredible Brian Miller and other story colored by Chris Summers, who I just worked with on Stoker & Wells: Order of the Golden Dawn. Brilliant stuff. Marshall Dillon handled the lettering.

Scoop: The Overstreet Comic Book Price Guide turns 50 this year and will be available about two months after the FCBD issue. Will this comic provide a preview of that milestone edition?
JCV: Not a major preview, since the core of the Guide is pricing and we can’t give that away ahead of time, but this issue is definitely part of our year-long celebration, “The Road to Overstreet 50.”