In the Limelight
David Drake, the Typhoon 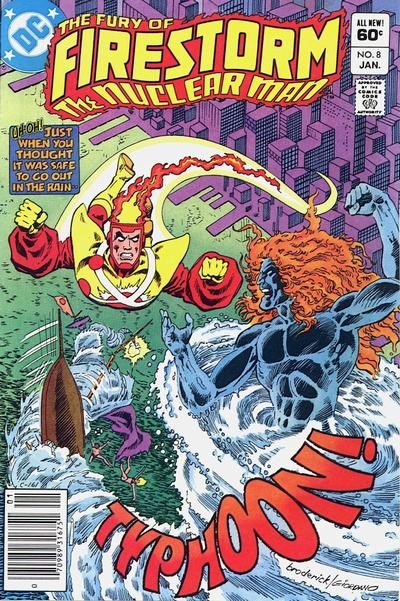 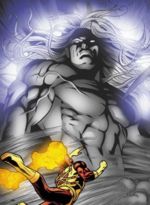 As many comic book stories go, a catastrophic accident that involves mutating cells (or activating what is called the “metagene” in the DC world) inevitably produces a “superhuman.” Unless the metagene also mutates his or her sanity, choosing weather or not to use these superhuman powers for good or evil is completely up to the possessor. Many chose to fight crime and become superheroes but it’s always fun to watch how it turns out when they chose to go “the other way.”

David Drake, one of the many characters DC has to offer, started out in comics as just another research scientist…that is until the accident. Teaming up with fellow scientist Martin Stein, the two were on a quest to develop a new bathysphere prototype, dubbing it the “Manta.” (A bathysphere is a spherical deep-sea submersible which is unpowered and is lowered into the ocean on a cable). Drake set out to design the housing of the vessel while Stein developed the small nuclear reactor that was to be the craft's power source. Setting out to sea to try out their new nuclear powered sea vessel, they hired the help of Anton Hammer, captain of the “Neptune Explorer.” Drake and Stein went aboard the Explorer and traveled to the South Pacific to conduct their underwater research. However, their plans were questioned when a tropical storm rolled in. Hammer insisted on carrying out the test, even though the storm made the conditions extremely unfavorable, and giving into the peer pressure, the two scientists lowered the vessel into the water with Drake acting as the pilot and Stein actually going into the Manta. Conditions got worse and Captain Hammer begins to panic, insisting the ship will capsize. In his fit of terror, he cut the Manta loose with Stein still inside of it. This is when scientist Stein slips away and turns into DC superhero Firestorm.

As Drake tried to exit the sphere, a now deranged Hammer shot him and Drake fell back into the submersible. The Manta capsized and its nuclear reactor breached disastrously. The interaction of the ocean water and the experimental nuclear pile caused an explosion that destroyed the vehicle and triggered Drake's metagene. His skin turned blue and his hair red. He also gained the ability to generate and control storms, wind, and lightning. In essence, Drake was the living eye of a storm. As Typhoon, Drake generates a whirlwind around the lower half of his body that enables him to fly or hover. He also can project lighting from his fingertips, channeling the energy at times as powerful electric blasts. To go along with this, he becomes extremely mentally unstable and tries to battle Firestorm (who used to be his fellow scientist Stein). During the battle, he destroyed the Neptune Explorer, forcing Firestorm to save the crew and then flees. After completing the heroic action of saving Neptune’s crew, Firestorm chased the character now known as “Typhoon,” eventually catching up with him somewhere over Sydney, Australia. Firestorm defeated Drake (Typhoon) by super-cooling the air around him, shocking him and returning him to normal. He left Drake in the care of the Sydney Hospital, thinking his powers were gone for good. Drake was then deemed cured and released.

It wasn’t until numerous attacks on the life of his wife did Drake realize his powers weren’t gone at all. In fact, he learns he can grow to tremendous size if he is in the center of the storm in which he generates. Firestorm seems to be the only one who can stop him and after another battle with his old scientific friend, Drake is found floating in the East River, de-powered and without identification. He remained in a catatonic state for a year, and was referred to as John Doe.

However, a storm in the area reawakened Drake and reactivated his powers. He somehow decided at this point that the best thing for him to do is kidnap his children from their mother and bring them to Pittsburgh, Pennsylvania. It was only when his daughter told him that she was terrified of him did Typhoon return the petrified children to their mother, who tells Drake she never wants him around her or the kids again.

Typhoon has made more recent appearances in comics, still stirring up trouble as a member of the Secret Society of Super Villains.