In the Limelight
Rip Kirby 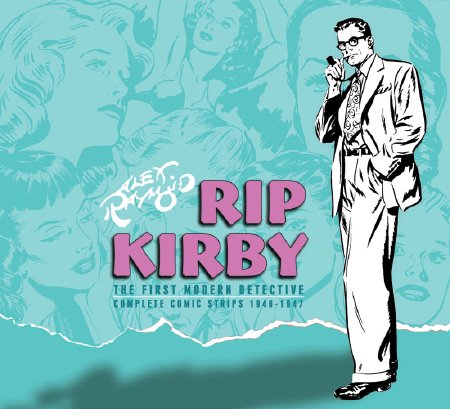 Before World War II, artist Alex Raymond had made his name by establishing a strong following on three popular newspaper strips, Flash Gordon, Jungle Jim, and Secret Agent X-9. Raymond’s stint on Flash Gordon inspired many artists, including Al Williamson, and it set an early benchmark for the adventure strip. When the war came along, though, the artist volunteered and was shipped out to the Pacific theater.

After he completed his military service, he expected to pick up where he left off on Flash Gordon, but King Features Syndicate had signed his replacement, Austin Briggs, to a contract that was scheduled to run until July 1948.

That turned out to be a very good thing. He got a new assignment and solid contract from the syndicate to develop a new strip, Rip Kirby, which had been created by editor Ward Greene.

Like the artist, the title character Rip Kirby was newly returned from the war. An ex-Marine Rip Kirby was also a writer, scientist and amateur detective.

Both the character and the artist hit the ground running. The first daily ends with a gun shot. The second one ends with a beautiful dead woman falling into Kirby’s arms, and things start from there. Kirby is aided by his girlfriend "Honey" Dorian and his assistant, Desmond, a former burglar, as he plunges into the case.

He is acting, of course, against the wishes of the police when he gets involved. That’s about the only standard issue private eye cliché readily apparent. Kirby is more of the Sherlock Holmes mode than of the Mike Hammer variety (although he’s certainly not afraid to use his fists, if that’s what’s called for). He prefers deductive reasoning to violence, wears glasses, smokes a pipe, and certainly appears to be a moneyed man-about-town.

The strip grew in popularity and influence almost immediately. Raymond had already defined himself as an artist’s artist, but this strip has everything: great storytelling, wonderful characters, and stunning art.

When Raymond died suddenly in a car crash in 1956, King Features Syndicate had to quickly search for a replacement artist for the strip. They turned first to Leonard Starr, who passed, but who also recommended his studio mate, John Prentice. Prentice took over the strip, put his on distinct stamp on it without diluting what Raymond had done, and stayed on it for the next 43 years.

IDW Publishing now has five volumes of Rip Kirby in print, the first four by Raymond and the most recent by Prentince. All five have essays that do a great job of putting this artistic achievement in contect.