In the Limelight
Meet the Gumps 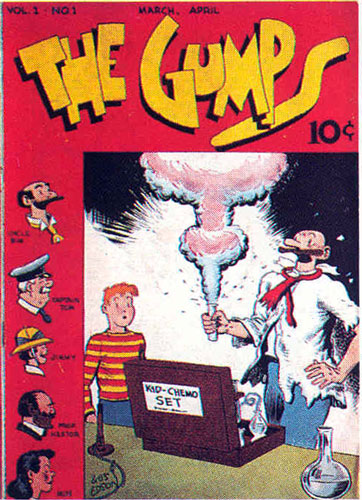 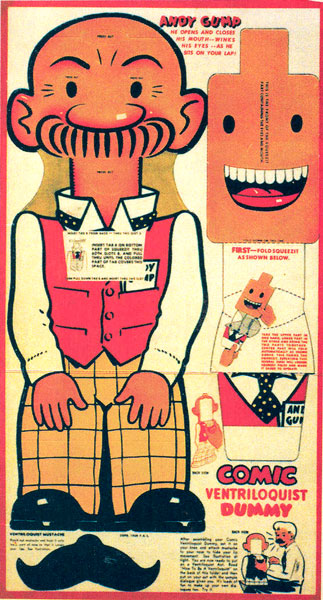 While life may be like a box of chocolates, Forrest isn’t the only Gump who has made his mark on the entertainment world. Did you know that almost 80 years before the shrimp-loving patriot charmed audiences the world over, there was Andy, Min, Chester, Uncle Bim and a whole slew of hilarious supporting characters who made comic strip history with The Gumps?

The idea began with Chicago Tribune publisher Captain Joseph M. Patterson, who wanted to develop a comic strip that featured the everyday adventures of a realistic, middle class family. But it was cartoonist Sidney Smith who really took the idea to the next level. He breathed life into the family and started a strip where anything could – and did – happen.

The Gumps began as a daily strip in 1917 and as a Sunday feature in 1919 – and Andy and his gang went on to become some of the most popular characters of the ‘20s. And the ‘30s. And the ‘40s. In fact, The Gumps lasted in the strips until 1959, and had plenty of comic books, a radio series, toys, games, sheet music, and even an animated cartoon along the way.

Just one look at Andy Gump and it’s pretty clear that you're looking at one funny guy. Completely lacking any sort of chin or jaw, he stood tall and lanky with arched eyebrows, a rather protruding nose, a prominent mustache and mostly bald head save for one or two odd hairs sticking out of the back. In the scenes where Andy talked (or, as was usually the case, yelled), his mouth appeared as just a black hole stuck in his neck. And, more often then not, he could be seen sporting dapper plaid pants, a vest and a jaunty hat of some sort. His comical appearance only hinted at the adventures that would come, however, most of which started with an overly confident Andy and ended with a fumbling, frustrated fop crying “OH MIN!”. Many of Andy’s escapades even involved stints in politics – he ran for Congress on a few occasions and in a string of presidential elections beginning in 1924.

Yet, for all his macho intentions, Andy’s dependence on his wife Min was unquestionable. And Min (short for Minerva), with her similarly lanky build and sensible hairdo, provided the perfect zany counterpart to Andy’s antics. She was hardly as erratic as her husband, and some argue that she was even the brains of the family, but she certainly did her fair share of door slamming, book throwing and general bawling and crying nonetheless.

Along with Andy and Min, The Gumps also included the detestable maid Tilda, the adorable, if tantrum-prone son Chester, and the filthy rich Uncle Bim – whose extravagant lifestyle provided an interesting contrast to Andy’s disgruntled, middle class existence. In fact, Uncle Bim was even one of Carl Barks’ inspirations for the fantastically wealthy Scrooge McDuck! Occasional appearances by characters such as the money-hungry Widow Zander and Min’s dessert-loving mother made the strip a hilarious parody of what everyday life was like in decades past. From the delivery of the new icebox to country drives in the roadster, the family-focus of The Gumps today provides a marvelous peek into a bygone era.

The Gumps was also a strip of firsts – it was the first comic strip to feature a character’s death (the character was Mary Gold, in the 1929 storyline collected in The Library of American Comics’ LOAC Essentials #2), the first to spawn a radio show (in 1934), and the first to be presented in such a way that each day’s strip told a new chapter of an ongoing story. This soap opera-ish technique had fans clamoring for more at the end of each strip, and undoubtedly helped perpetuate its popularity. It was also for The Gumps that the first million-dollar contract was signed for a comic strip. Sadly, just after signing this contract in 1935, Sidney Smith was killed in a car accident. His assistant Gus Edson took over, and though he did a fine job with the strip, there was a certain magic missing. So while the hijinks and hilarity continued for nearly 25 more years, the popularity of the family steadily declined.