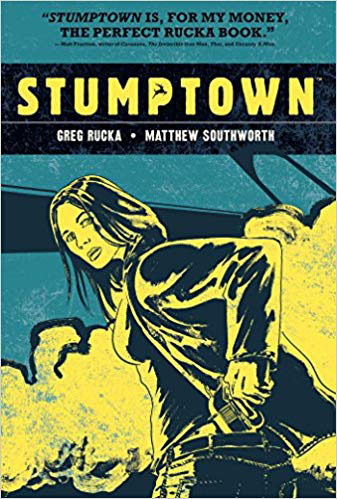 ABC has debuted a brand-new trailer for their upcoming series, Stumptown, based on the limited comic series of the same name. This live-action series for the network stars Cobie Smulders as Dex Parios, “a strong, assertive, and sharp-witted army veteran with a complicated love life, gambling debt, and a brother to take care of in Portland, Oregon. Her military intelligence skills make her a great P.I., but her unapologetic style puts her in the firing line of hardcore criminals and not quite in alliance with the police.”

The Stumptown comic series was originally published in 2009 by Oni Press, and was written by Greg Rucka with artwork by Matthew Southworth. The first volume of the series was nominated for the 2011 Eisner Award for Best Limited Series.

ABC’s Stumptown will feature Smulders in the lead role, with Tantoo Cardinal, Cole Sibus, Adrian Martinez, Camryn Manheim, and Michael Ealy joining her in the cast. It’s set to premiere later in 2019.