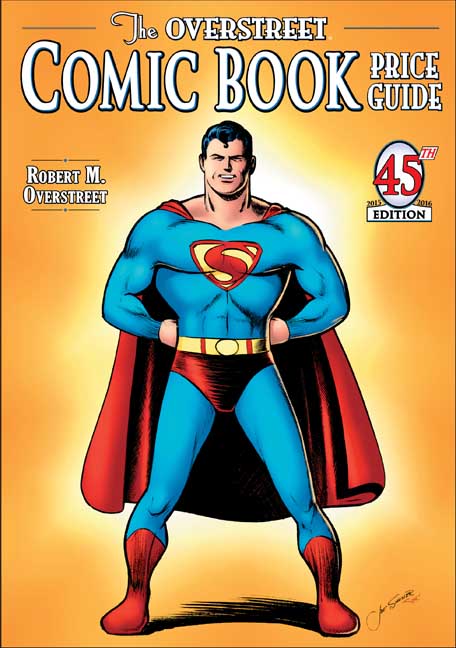 It’s not every day you get to use an unpublished Joe Shuster original as the cover for your book. In fact, you could say that featuring Shuster’s powerful Superman sketch on the cover of The Overstreet Comic Book Price Guide #45 was more than 70 years in the making.

More than a decade ago, Gemstone Publishing (and Diamond Comic Distributors) President and CEO Steve Geppi acquired Shuster’s sketch of the Man of Steel, which had originally been done for Hall of Fame pitching great Lefty Gomez of the New York Yankees.

The piece is undated, but based on the development of Superman’s “S” shield and other minor details compared against Shuster’s other work from the period, it would seem to have been done in 1941.

There are a number of similar Shuster sketches that utilized this pose, but the execution of the figure, the fluidity of the line work, and the depth added by the shading are unmatched.

It is inscribed to Gomez, “From one Superman to another,” and signed by both Shuster and his Superman co-creator Jerry Siegel. In 1941, Gomez would have been in the tail end of his historic career with the New York Yankees (he set post-season pitching records in the 1930s that still stand).

For years this piece hung in Diamond International Galleries, where several of the Gemstone Publishing staff eyed it for an Overstreet cover. For various reasons, though, that never happened, and the piece was eventually sold.

As it turns out, we would get another chance when the piece’s new owner offered it for auction through Hake’s Auctions.

“At our request, Hake’s President Alex Winter had the staff there create a high resolution scan of the piece for us,” said J.C. Vaughn, Vice-President of Publishing for Gemstone. “Once DC approved it, they also approved Alex Sinclair, one of the top colorists in the business, to add the color. It’s a cliché to say ‘I think the results speak for themselves,’ but I think they do!”

Other than in auction catalogs, the piece is considered previously unpublished.

The Overstreet Comic Book Price Guide #45 Superman hardcover edition is long sold out, but we have a number of uncirculated (like all of our offerings) soft cover editions still available for $30 each (plus shipping and handling). The price will be going up in the new year on the remaining copies.