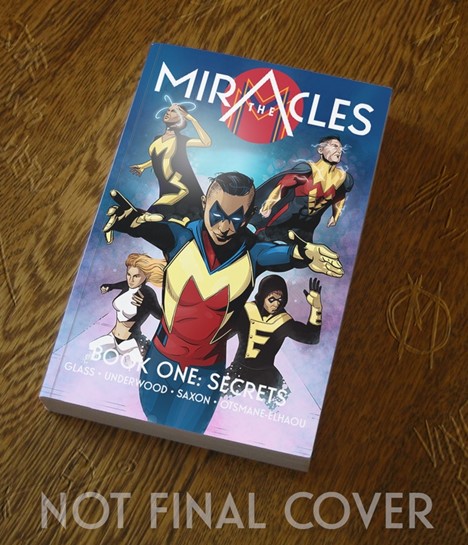 The comic reader fantasy of being swept up into super-heroics alongside their favorite characters is a reality in the new graphic novel The Miracles. The project is currently seeking backers on Kickstarter.

The Miracles introduces Elliot Morgan, a high school senior and comic fan, who is shocked to learn that he has superpowers. Once he discovers the powers, Elliot immediately displays them in public and is astonished when his favorite comic characters show up in the real world. They reveal that he is their son and that they are refugees from the world in the comic who escaped to this world when he was a baby. More surprises follow in the form of family secrets.

The Kickstarter campaign page introduces the characters with profiles and sketches, story details are revealed, and the creative team is profiled.

Perks start with being named on the book’s “thank you” page, a paperback copy of the book, limited edition hardcover, stickers and other swag, and retailer incentives. The goal for the Kickstarter campaign is $48,622 and it ends on March 4, 2021.