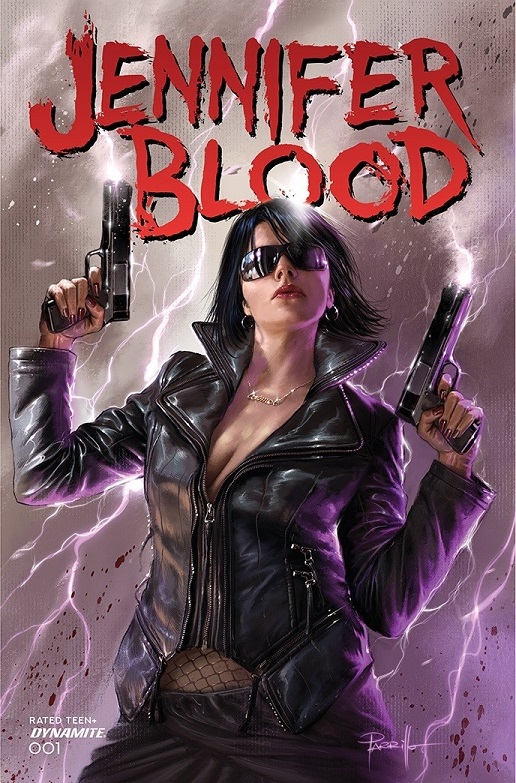 Jennifer Blood is back for her own series and she’s gearing up for a battle with a town full of mobsters.

“Once upon a time, Jennifer Blood was just like any other suburban housewife – except that she took vengeance to the streets, cleaning up the criminals connected to her past. Now she’s dead, or so it seems,” Dynamite’s description reads. “That nail in the coffin doesn’t seem so conclusive when suddenly people start dropping like flies in the quiet cul-de-sacs of the town of Bountiful, Utah. When Bountiful just so happens to be an undercover town completely full of mobsters, Blood’s possible return could start a whole war! Who will end up as the apex predator in this concentrated pond of criminality?”

The new Jennifer Blood series, which follows her guest appearance in DIE!namite Lives, will be written by Fred Van Lente (Marvel Zombies) with Vincenzo Federici (Red Sonja) handling the art.

“To bring back Jennifer Blood I really wanted to come up with a setting worthy of her,” Van Lente said. “The town of Bountiful is like the suburb at the end of Goodfellas, full of Ray Liottas who have cut a deal with the Feds. But Jennifer Blood doesn’t cut deals, she just brings spectacularly gory vengeance to criminals who thought they’d escaped justice. Vincenzo Federici brings such a raw, grindhouse energy to this, readers are going to have such a bloody good time.”

“This opportunity is incredible for many reasons! First of all, Jennifer Blood is a Garth Ennis character! Then, I’m in love with Fred’s work after I had the opportunity to work with him previously. This new story is totally crazy! Stay tuned, you’ll see,” Federici said.

Lucio Parrillo has provided the main cover for Jennifer Blood #1 with artists Lesley “Leirix” Li, Junggeun Yoon, and Joseph Michael Linsner creating variant covers, as well as a variant with cosplayer Rachel Hollon. It will be in comic shops in October 2021.