Thank You Variant for R.L. Stine’s Just Beyond FCBD 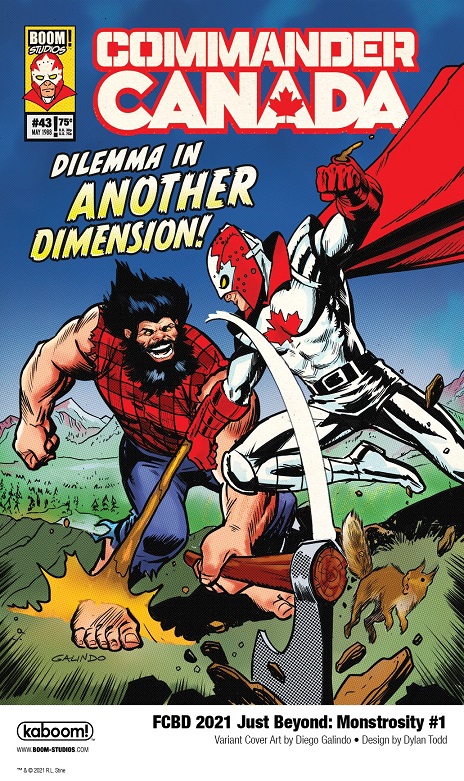 BOOM! Studios has created a one-per-store retailer “thank you” variant cover of the FCBD 2021 Just Beyond: Monstrosity #1. The special issue previews Just Beyond: Monstrosity, the new graphic novel from R.L. Stine, the bestselling author of Goosebumps and Fear Street, with art by Irene Flores (Heavy Vinyl) and colors by Joana LaFuente.

The “thank you” variant features a special Commander Canada cover by Diego Galindo (Mighty Morphin Power Rangers) and was designed by Dylan Todd. The middle grade supernatural series is also adapted for the Disney+ series, which premieres on October 13, 2021. Galindo’s cover mirrors how it appears on the Disney+ series and became available on October 6.

“There’s no business like horror business! Ruthie and Ezra Dillon’s dad and uncle just bought an old Hollywood movie studio,” BOOM!’s description reads. “And while the family has plans for reviving it to make scary movies for a modern audience, the monsters hiding in the backlot have other ideas. Ruthie and Ezra are eager to star in their family’s films, but they’ll soon find themselves in a real horror show with Wolfenscreem, the Lagoonatics, and the Wasp-Keeper…who are all ready for their revival with a vengeance!”

Just Beyond: Monstrosity will be in comic shops on October 20.