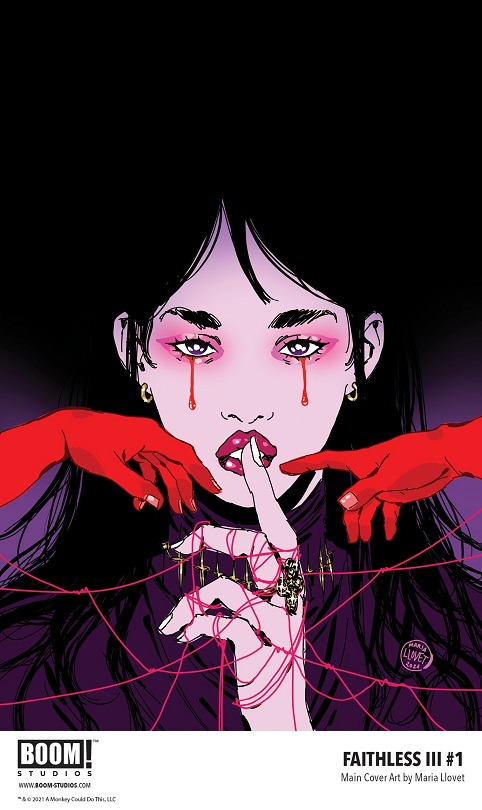 Writer Brian Azzarello and artist Maria Llovet are reuniting for the third and final act of Faithless. In the six-issue miniseries from BOOM! Studios, Faith reappears mysteriously in the art scene with a secret that could be disastrous for everyone.

“Nine months after her mysterious disappearance, Faith suddenly drops back onto the map. While the art world debates whether her absence was a masterpiece of performance art or just a publicity stunt, Faith retreats to Louis’s studio to recover from her journey into the unknown,” BOOM’s description reads. “But soon her best friend Ginny begins to realize that something is very much amiss with Faith. Where was she for nine months? And why does Faith suddenly seem so obsessed with Ginny’s son Jacob?”

“I can’t tell you how happy I am to be working with Maria again, while being all melancholy at the same time,” Azzarello said. “I’m sorry for what we're about to do to you, Faith. This is the end, beautiful friend.”

“I’m thrilled that we’re back with Faithless III, I’m so proud of being part of this already iconic series. Many readers have reached out to me saying they're highly anticipating this final arc. I think they won't be disappointed,” Llovet said.

“Exploring Faith’s descent into a dangerously seductive underworld where magic, sex, and fine art meet has been a wild and gratifying ride,” BOOM! Executive Editor Sierra Hahn said. “Faithless III culminates with everything we all set out to do from the start. We’re playing in a world that’s sex positive, passionate, and – like the best of horror – a little dangerous, too. Faith’s self-discovery continues and she will titillate, surprise, and impress readers right up until the very end.”

Faithless III will be in comic shops in February 2022.