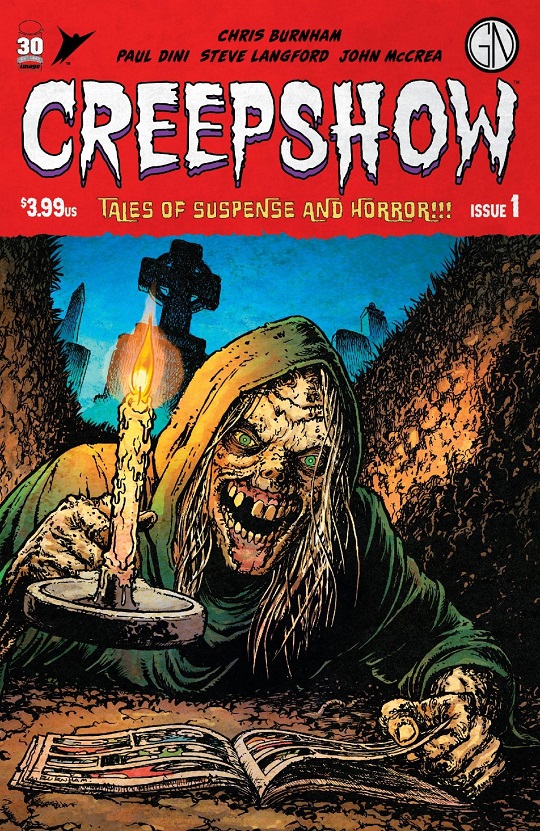 The creative teams and stories in Skybound’s Creepshow #1 have been announced. The comic is based on Greg Nicotero’s Shudder TV series, which is itself based on the 1982 horror film written by Stephen King and directed by George A. Romero. The first issue in the five-issue anthology will be in comic shops on September 21, 2022.

Like the TV show, each issue of Creepshow will tell two stories. The first one by writer-artist Chris Burnham (Die! Die! Die!) kicks off with a tale of trick or treaters learning why they shouldn’t mess with certain houses.

“I first saw Creepshow in third or fourth grade...right around the time I had the initial germ of the idea for the story in this issue,” Burnham said. “I was absolutely terrified to take more than one candy bar from the take one bowl. What if the owner of the house was hiding in wait? And what would they do if they caught me?!? I’ve chewed these questions over for 30 years...and this story is the definitive answer!”

In the second story, writers Paul Dini (Batman: The Animated Series) and Stephen Langford (Creepshow TV series) and artist John McCrea (Hitman) collaborate on a story about Shingo, the party clown “with an appetite for more than cake.”

“Parents might fool themselves into believing that anything big, cute, and silly is good for kids, but little ones recognize a monster when they see one. Stephen Langford and I put ourselves back into that childlike mindset when we dreamed up Shingo,” Dini said. “In the world of Creepshow, kiddie birthdays are rarely fun, parents often have worse outbursts than their kids, and that strangely grinning party character is not as friendly as it seems.”

Chris Burnham created the main cover of Creep, which is joined by a variant by Declan Shalvey (Moon Knight) and a 1:10 incentive cover by Vance Kelly.