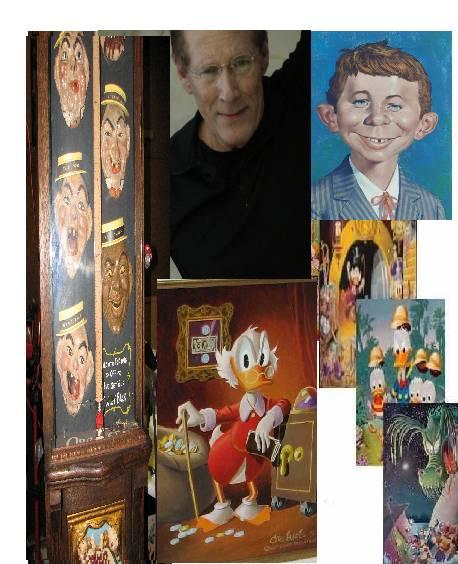 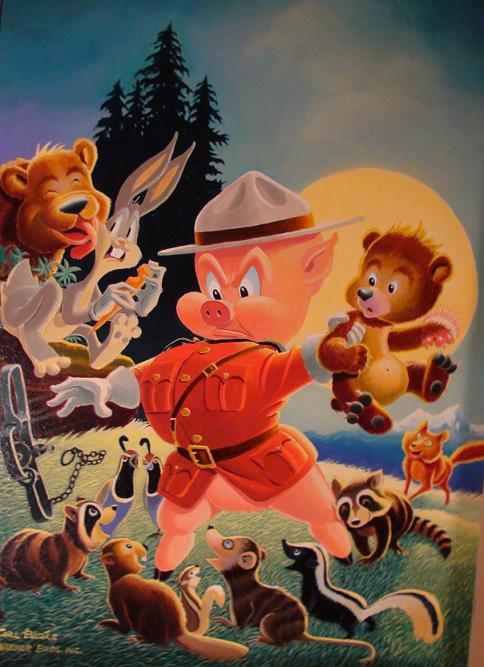 When it comes to lifelong collectors, few can boast over fifty years of memorabilia and the knowledge that goes with it. Theo Holstein is among those well versed collectors. He has been a comic character fan and collector since 1955 when he was still under ten years-old. His beloved hobby began while he was attending a mountain home junior camp where one of the campers was charging other children money to read his MAD pocket book. Because it was their sole source of entertainment, the other campers jumped on the chance. As Theo remembered, “I was exposed to it and became so interested in having something like that that after the camp was over I ordered a set of five of them.”

Holstein started out with the What Me Worry? MAD paperbacks and is now collecting turn of the century penny arcade machines and cast iron or papier mâché figures, among other things. When asked about his collecting habits he simply put it, “I only buy what I like.”

There is, however, at least one piece that got away. The piece that he has always wanted, but has yet to buy, is the first MAD What Me Worry? cover featuring Alfred E. Neuman in his first appearance on the cover. The piece was part of the MAD auction that was recently held. Before this sale, the art had been sold for $20,000, but this time around it went for $203,000.

Being a key part of the collectibles industry, Holstein has a few ideas about different collectibles’ worth. Regarding what he expects to rise in value, Holstein responded, “That’s hard to say. Hopefully the things I like! But, there is no such thing as a sure thing.” He expects it to be original cartoon art, such as illustration art and anything to do with comic character art. This trend has been steady throughout the past 30-40 years as Theo believes the most valuable collectible from the 1970s and ‘80s is original Carl Barks oil paintings.

When it comes to comics, Theo loves Superman #1 from 1939, which he believes is the most undervalued comic book. When asked why, Holstein said, “It’s Superman’s first appearance in his own comic book, making it historic. I think it’s the first appearance of any superhero in his/her own comic. It’s like the Honus Wagner baseball card, it’s the ultimate, ultimate comic book.”

It’s easy to see that Barks is one of his favorites, considering his favorite collectibles include his Carl Barks paintings, Norman Mingo MAD paintings, and 1904 penny arcade machines. Though he does feel that it is impossible to say which is his absolute favorite. He is sure, however, that “Porky Pig of the Mounties” is, “the star of my Barks collection. I have always wanted it since I saw it on the cover of the Overstreet Comic Book Price Guide in the 1970s. I still can’t believe I finally actually own it.” That painting, along with “Mardi Gras Before the Thaw,” “Hands Off My Playthings,” “Bullet Valley,” and “Voo Doo Land” round out his picks for the five best Carl Barks paintings.

Unlike many fans, Theo had the opportunity to meet the man behind his prized collectibles. He knew Barks well and visited him and his wife every month on the weekends in the 1970s. What does Holstein think of the Good Duck Artist? “He was a happy man and loved his work. He wasn’t really talkative, and I think all of his emotions were talked about in his paintings. He was very expressive in his artwork and his stories. I may call him an introvert, but an extrovert when it comes to his artwork.”

Along with getting to know this legendary artist, Theo met Velma Dawson, the creator of Howdy Doody. He also praised her saying, “She was a very humble elegant lady. She was an artist in her own right. She created something that really was historical. It really changed all of our lives. I think the show had an effect on everyone who watched it, along with the toys and the memorabilia. She was an important part of my life and most of my generation. She was not a person I would say that was outgoing, but she was certainly very kind and a respectful person.” He added, “I have always been a Howdy Doody fan. I want to thank Velma Dawson, she made it possible for me to own her first Howdy Doody puppet and the first ever produced, for the NBC historic Howdy Doody show.”

John Snyder, President of Geppi’s Entertainment, who has been interacting with Holstein since the 1970s considers him one of the best, realist comic characters of the industry, “I remember when I first talked to Theo back in 1974, and his perspective on the value of comic books is unprecedented. He called the shot; he said back then what they would be worth now. He has always been an interesting person to talk to about the history of comic characters. He has owned some of the best comic character artifacts that exist and he recently bought the Porky Pig painting from us. I agree him that it is one of the best paintings Barks ever did.”

With these relationships, and his knowledge of the collecting industry, Holstein will no doubt continue being an important part of comic character collecting through his purchases and contributions.