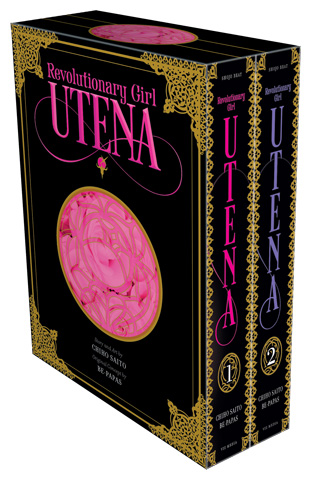 Revolutionary Girl Utena has been one of my favorite anime series for more than 20 years now – I saw the movie when I was first starting to watch anime as a kid and was immediately hooked. A couple years ago, Viz released an absolutely stunning box set of the manga, containing two hardcover volumes that collect the series and add color pages and a collector’s poster. If you’re a fan of shoujo manga and are looking for something classic to read, I can’t recommend it enough.

The series follows Utena Tenjou, a young woman who has enrolled at Ohtori Academy, believing the school is connected to the mysterious prince that once saved her during her childhood. She was so influenced by the prince’s actions that she desires to become a prince herself – and she’s given the opportunity to prove her noble ways after she stands up for her classmate, Anthy Himemiya, and gets involved in the school’s dangerous “dueling game.” The series of duels is held for the sake of possessing Anthy, also known as the Rose Bride, who they believe to hold the power to revolutionize the world. What that power means, exactly, is left up to interpretation.

Utena contains some classic romantic shoujo manga tropes, but thanks to the duels it also features plenty of action and suspense as well. The series is best described as a postmodern fairy tale and it’s been hugely influential on other media for years. If you’re a fan of the anime and you haven’t read the manga, give it a shot – it originally ran concurrently with the anime, so it diverts in some interesting ways plot-wise where the anime took a different path. The artwork by Chiho Saito is still as beautiful now as it was in the 1990s, so even if you just want more of the overall Utena aesthetic in your life, consider picking this up.