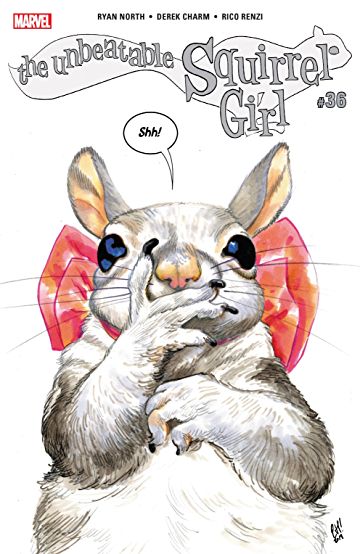 New York City is a pretty noisy place, to say the absolute least. Doreen is a pretty chatty individual herself. So when a massive ghost shows up and silences the entire city at once, things get a little awkward! It’s up to Doreen to uncover the mystery behind the ghost’s desire for absolute silence – as well as figuring out new ways to communicate with her fellow heroes.

It’s not often that we get treated to a “silent” comic book, especially when it comes to superheroes. But this issue of Unbeatable Squirrel Girl is one worth looking out for, thanks to artist Derek Charm’s ability to still tell a heck of an entertaining story without any words on the page. Not only is the story great, but it also shows off his clean-yet-quirky style of artwork that works so well for the character. While this is kind of a filler-ish one-shot issue, it’s definitely one worth picking up.