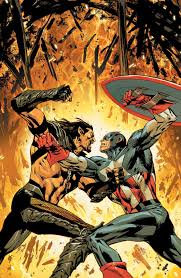 Namor did what he set out to do – he bombed a small town in Maine. But this wasn’t simply a bombing, it was one that unleashed a chemical weapon that turned regular humans into water-breathers. He floods the town, essentially saving its people from choking to death. But some of the biggest questions remain, mainly as to why Namor has done what he’s done.

Invaders has, so far, been a really interesting look at some of Marvel’s oldest characters from their Timely days. Namor has always been a complicated character, and this storyline doesn’t do much to help simplify his personality or his actions. I don’t typically read books focused on any of the starring characters in this series, but I can’t wait to see what the fallout from this issue’s events entail.