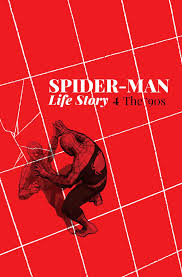 The 1990s prove to be a turbulent time for Peter Parker (though, of course, when has his life ever truly been stable?). Mary Jane has left with their twin children, and Peter struggles with his day-to-day life running Parker Industries. Beyond that, an old foe resurfaces once again, and he bears information that shakes the foundation of his – and his clone Ben Reilly’s – entire lives.

Life Story has been an interesting attempt to connect the various eras that Peter Parker has graced over the years into a single storyline, and for the most part I think it’s been successful. My only gripe about this series so far is that I think having one issue per decade (much as they are oversized issues) means that there’s a lot to cram into each of them. Despite that, the pacing so far has been pretty solid, and I look forward to seeing how this all gets wrapped up.