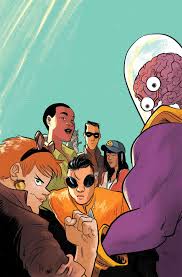 Squirrel Girl, Chipmunk Hunk, Koi Boi and their non-powered pals have been doing their best to keep evildoers at bay, but they soon realize that Brain Drain has gone missing. They decode a message sent from him to reveal that Melissa Morbeck – one of Doreen’s most notorious villains who should be in a jail cell causing no harm to anyone – is up to no good. But worse than that, Doreen has been publicly revealed as Squirrel Girl to the world.

The Unbeatable Squirrel Girl is coming down to its final three issues, and boy are they ever ramping things up for a hefty conclusion. Whenever a hero or heroine gets their identity revealed, it’s a big deal, and Doreen is no exception to that. Melissa is out for blood, and it’s going to take Doreen everything she’s got in order to stop it. This entire series has built to this exact moment, and I can’t wait to see what happens before this series closes its run in November.