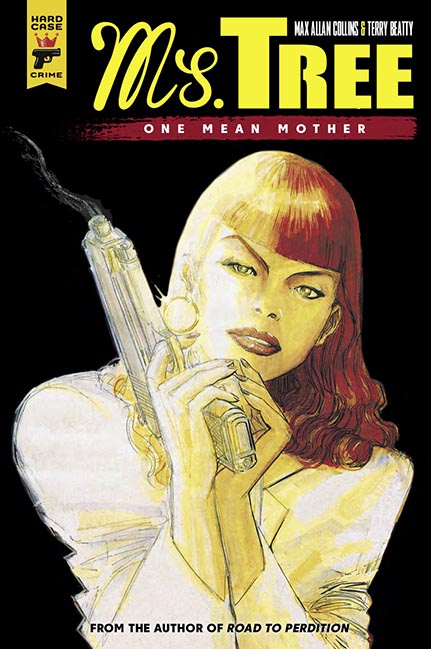 The serialized comic book adventures of Ms. Tree, private investigator Michael Tree, first appeared in the pages of Eclipse Magazine in 1981. It’s been a long road since then, taking the tough-as-nails leading lady through Aardvark-Vanaheim, Renegade Press, First Comics, and DC Comics, movie options, and a 2008 novel from Hard Case Crime. Now, at long last, someone’s collecting all of her comic book adventures.

Written by Max Allan Collins (Road To Perdition) and illustrated by Terry Beatty (Rex Morgan, M.D.), Ms. Tree is cut from the same cloth as Mickey Spillane’s Mike Hammer. Spillane and Collins were close friends in real life, and Ms. Tree is more than a tough guy’s tough girl. She’s her own woman. She is sharp, insightful, hard-nosed, somewhat caustic, and when called for, very deadly.

It’s odd (at least to me) for a retrospective collection to start with the DC Comics stories, since they were the last produced, but they do represent some of the creators’ best work on the character, so it sort of makes since. Regardless of that, this book is a compelling read for those of us who love the character and a great, thoroughly accessible introduction for new readers.

Bravo to Titan for this new collection and the books that will follow!