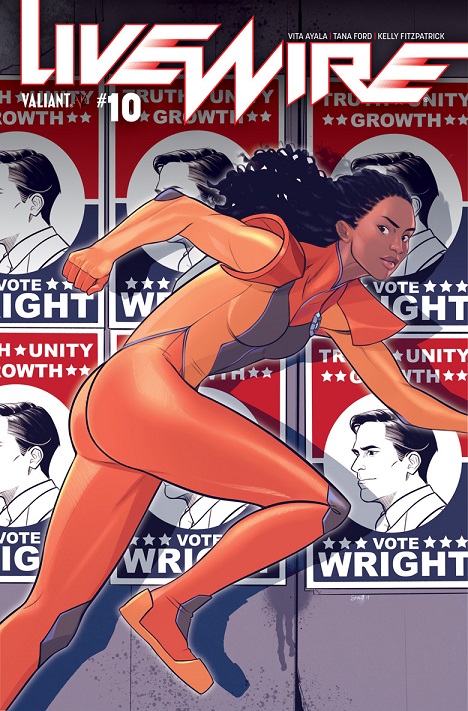 In the previous issue, Livewire was approached by John Wright, an LA City Councilman running for Senate, and Gwen Goodman, his campaign manager. They presented the idea of promoting better relations with psiots by improving her image. Though reluctant and suspicious, she agreed to their proposal.

Livewire #10 picks up as Wright and his Senate opponent Jeffrey McCoy, who is an anti-psiot leader, are having a debate on a talk show. Livewire joins the conversation which scares several in the audience, but gives her the chance to express her motivation and remorse for what she has done in the past. From there, Livewire had private conversations with both Goodman and Wright, that seem good, but there’s definitely more to the story than she may know.

This new arc by Vita Ayala is the best one since Livewire began. It’s timely given that the U.S. is dealing with heated opposing opinions on a number of topics. This story draws parallels to some of those issues while also developing new characters that could be planning any number of moves for or against psiots. It’s well written and thought provoking.